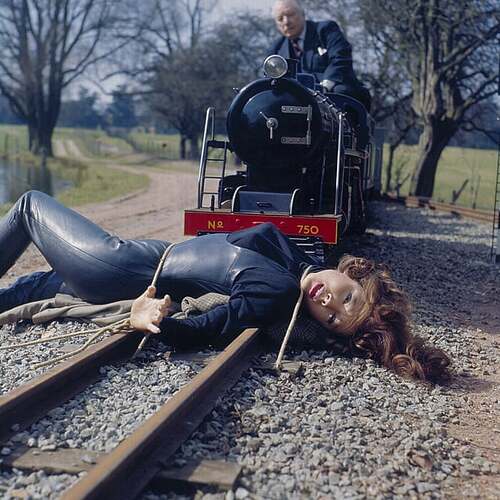 Should definitely be in a Bond movie.

Notice how they placed a coat underneath Mrs. Peel, so it’s not too uncomfortable. Even if I knew nothing about all this, I could tell that this has to be from a British TV series

I’ve voted for the Motel Shootout scene in TSWLM, it could make a great PTS.

@Jim you also forgot the opening brainwashing scene from TMWTGG. I would have voted for that.

But (for me) more important: how can we get Wood’s spacewalk into a future Bondmovie, without the story becoming too much science fiction?

I agree jamesb007nd, we need Christopher Wood’s spacewalk in the film series. I can’t believe they didn’t use it Moonraker. It was one of the best parts, if not THE best part, of the novelization. In the This or That thread I came up with a PTS scenario where James Bond has to unmask a saboteur aboard the International Space Station and has to do a space walk to stop him from blowing the thing up. That might fit your criteria of not being too much science fiction.

Anyway, I was going to vote for Bond’s attempted assassination of M in The Man With The Golden Gun, but the option wasn’t there. As a result, my choice for the best bit of Fleming as yet unfilmed is: cane gun to the spine in Casino Royale. I was most looking forward to seeing that scene (as well as, of course, the carpet beater scene) in the 2006 film, but we didn’t get it. It might not work in a regular gambling scene now, but perhaps at something like a dinner/party scene full of people whereupon Bond manages to escape from danger as in the novel, but then it moves straight into a hand-to-hand fight scene against his assailant.

I’m going with drowning the villain in animal dung. It ticks a lot of boxes. It’s funny, weird and a horrible way to go. I’d also include the giant squid battle from Dr No as well. Touches of the bizarre seperate Bond from other action franchises, and I’d like to see that on the big screen.

Yes, I know NSNA and CR67 aren’t in there. You’re still allowed to like them if you want. They haven’t been cancelled in some sort of woke explosion in a cultural war. I don’t have that power.

Martin created the perfect non-Barry-Bond score, and I don’t think it can ever be topped.

I like Conti´s and Hamlisch´s scores, too, close runner-ups here.

Kamen - for my taste too close to his Lethal Weapon/Die Hard-scores.

Zimmer - well, good, effective. But mostly an adaptation of previous music. Even his own.

Norman - in the style of its times. Not too special, though.

Serra - too special, too little Bond. Still kind of fun, that cold sound. If one is in the mood.

A very close battle between Hamlisch and Martin - both of their scores tower above the rest. But for me, Hamlisch just pips it.

The CR67 score is fantastic though…!

I chose Hamlish (the movie score, not the album re-recording), but I like the Martin LALD score also very, very much.

Live and Let Die is fantastic, however I’m going with the black sheep Serra. His score is so unique to everything else and I love the introspectiveness that I feel digs deep into Bond’s soul, namely the lonely melancholy of his profession.

Favorite one-shot score? We’ve had some good stuff from all those guys, but for me, it comes down to George Martin’s Live And Let Die and Bill Conti’s For Your Eyes Only. Both are great and are neck and neck on my list, but I seem to like Conti’s score just a tick better so it got the nod. But I will never say a bad thing about Martin and his LALD score.

Lois Maxwell is the iconic Moneypenny, and you can’t help but think of her when you hear the name Moneypenny. But having said that, she is not my favorite. There’s just something about Samantha Bond and her banter with Pierce Brosnan that I really enjoy. So my choice is Bond, Samantha Bond.

I‘m such a boring traditionalist - only when it is Bond related, of course. So, Maxwell. The first Penny.

Me too. I love Samantha and Naomie and even like Caroline Bliss, but can’t help myself for just choosing Lois Maxwell. She’s the original one.

Have long suspected Leiter wanted to pull rank on Bond.