Double Or Nothing by Kim Sherwood out 1st September 2022

Curious what you think.

I think the books have mostly preceded NTTD in establishing separate universes for each author’s vision of Bond. I would say the only one that might be considered a possible extension of the Fleming canon would be Kingsley Amis. That said, an argument might be made for Horowitz given his devotion to the timeline and chronology of Fleming (even including bits of actual Fleming prose).

Gardner’s Bond has always seemed self-contained to me, as is Benson’s who seems to be the clearest amalgam of literary and cinema Bond that any author has given us.

Pearson’s Bond pointedly exists in his own universe with knowing winks to both literary and cinema Bond’s existence.

All of the latter authors also seem to be one-off interpretations in their own closed universes—Faulks, Boyd, Deaver, Higson.

Off the the top of head, no, there’s nothing to preclude them being together, but it’s been a very long time since I read Higson, so there could well be details that are contradictory between them.

but can Higson and Horowitz work within the same timeline? Or do they somehow contradict each other?

Higson sticks straight to Fleming (IIIRC, he named the YOLT obituary as his basis), and Horowitz takes place within the “Fleming universe”, too, so there shouldn’t be a problem.

But if James bond is missing,is he actually going to be in it?

The trilogy is about ‘Double O’ agents, we’ll meet new ones and it’s supposedly expanding the James Bond universe. Follows that Bond, if present at all, will be at most a minor character. Perhaps nothing more than a legend the ordinary spy grafters talk about in the canteen or hound the freshmen/women with. 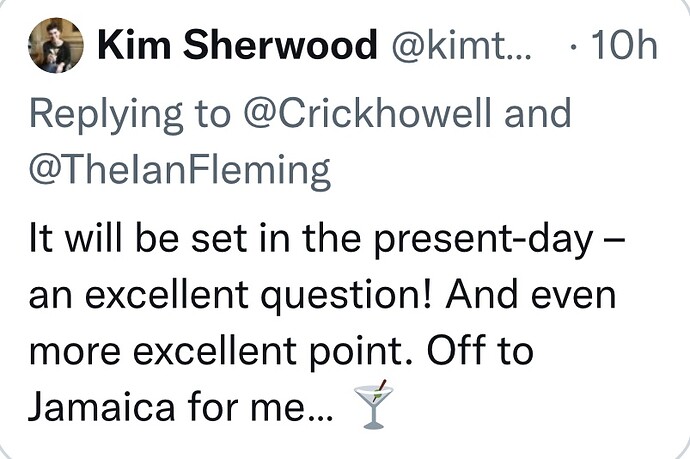 As the statement strongly suggested with the use of the word contemporary. Also interesting to note the premise of the book could suit Bond 26 - loosely continuing on from NTTD while still being a reboot. Let’s see how Sherwood handles things.

That answers my first question about the books. My next would what the target audience for the trilogy is. I’ve read suggestions that it sounds tailored to a young adult audience, but I feel that none of the promotional statements support this.

I’m not sure how I feel about this. More James Bond novels are great, but if it’s going to be centered on the other Double Os with very little, if any, 007, I’m a bit leery. Although having said that, I did not think the Young Bond series was a good idea or would work out that well, but Charlie Higson proved otherwise. I will keep an open mind.

Interesting development. I might be wrong (I accept I frequently am) but I seem to recall Fleming suggesting that at any one time there are three 00s, including Bond. I also accept that this is all fiction and matters not and that there might just as equally be three thousand.

I’m not sure how I feel about this. More James Bond novels are great, but if it’s going to be centered on the other Double Os with very little, if any, 007, I’m a bit leery.

I’m sure Bond will end up playing a large role in the story. Seems to me it’s the opening hook of the series - Bond is presumed dead and his contemporaries are all gone, with him having to enter a changed world full of new faces. If that’s what it is, I like the idea.

While I don’t put much hope in a huge role for Bond - it would seem to try and do its own thing with new characters - the inclusion of M and Moneypenny does indicate it’s not been ages since Bond went missing. Evidently there will be characters who knew Bond in active service - it’s logical to assume Bond will play some part in this, if perhaps not in all volumes or in a role as active as usually.

Perhaps it could be structured like The Spy Who Loved Me, with the new characters given the floor for the majority of the book, and Bond entering the scene towards the end?

making her the first woman to write a 007 novel.

She was interviewed on Radio 4 this morning. The presenter was excitedly saying the same but Kim Sherwood is up to speed and corrected her saying that Samantha Weinberg had already written the Moneypenny Diaries.

I’m even more excited about her books now that I know that. Being that aware of the world you’re writing about can only be a good thing.

Oh, it was even better than that. She mentioned Johanna Harwood’s script writing for Dr No and Phoebe Waller-Bridge’s involvement with NTTD. Totally up on it.

The only one she missed was the writing for The World is not Enough by Dana Stevens, but I daresay that would be because most people seem to forget that movie.

Also I’m pretty sure she wasn’t credited, making it an oddly deep dive factoid, but awesome that she made sure not to let a bit of revisionist history slip by.

Exactly. And all the uncredited script doctors who contributed, female or male, are forgotten anyway, unfortunately.

So reading between the lines , the trilogy seems like a spin off,a bit like when the highlander film series branched out into television,and you had Christopher Lambert,the main lead of the film’s, appear into the first episode to smooth the transition and introduce the new characters.

I’m all for hearing about the exploits of the other 00’s, but it should not be called James Bond.

The girl from u.nc.l.e was connected to the man from u.n.c.l.e,but did not have the same title…

Did you just guess what the plot is going to be, then criticise the book for your guess?