Everything Wrong With Diamonds Are Forever 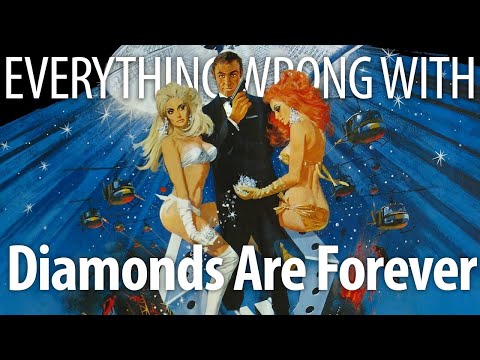 Someone buy @MrKiddWint a drink first!

Haven’t watched it, yet, but I guess you better make that two.

These „Everything wrong“-videos only show everything that is wrong with people considering themselves too clever for… um… silly entertainment, so much that they spend lots of time making videos which they hope will get them applause.

Not much to discuss.

And yet not clever enough for cinematic poetry.

@Orion: thanks for the drink, but it wasn’t necessary. A tepid critique (and that might be overrating it).

I made it about ten minutes into this. Plenty of obvious point blank easy shots - but completely missing the point that this is the series of action/adventure fantasy movies Connery starred in long before the Highlander flicks.

Whatever you see on the screen is subject to the demands of the spectacle. We don’t ask why the trapeze artists swing from the ceiling of the circus tent, at least not while they are performing.

And when they bow to the applause of the audience and we could ask the why and how…there’s already a magician sawing a lady in half. Bond films function along the lines of a circus act - pace and surprise and, yes, some absurdity too.

I’ll tell you this, watching that made me appreciate DAF even more. It’s got class, paste etc. ( Thanks Shady )

Bond films function along the lines of a circus act - pace and surprise and, yes, some absurdity too.

He seemed to think he had watched a Frederick Wiseman documentary.

I’ll tell you this, watching that made me appreciate DAF even more.

I felt the exact same way!! I experienced every nit he picked as another example of the movie’s cinematic charm and grace.

These videos are made by those annoying guys in class who always ridiculed everything but knew nothing.The Beavis & Butthead-group.

The thing here is, all those little holes in DIAMONDS ARE FOREVER - and the large ones, too - are quite in line with Fleming and his aim to entertain with swift broad strokes of suspense and thrills.

Would an intelligence service spend fortunes of cash (while its home turf is almost broke) to play cards in an expensive resort against an enemy agent? Would they send their guy under a flimsy cover - but his own name - with no less than three guns? Would nobody get suspicious when the agent’s cover is blown on arrival, would nobody care to reconsider the whole assignment?

Fleming’s books are practically made up of such inconsistencies. Not because he was so completely beyond the reach of reality, or because he just didn’t bother, to the contrary. Fleming made up his tales in the most thrilling, entertaining ways.

The Nazi that doesn’t keep a low profile but, burning with revenge, arranges to charm his way with money to the top of London’s society - and from that position doesn’t just detonate a bomb but a nuke. And that on a rocket built on the Dover cliffs, by the Britons themselves.

Or the gangster who smuggles gold coins into the US - who’s also a voodoo figure and keeps an effigy at his side and a gun port in his desk.

Or the executioner for Smersh - not just an intelligence subsidiary of the NKVD but an organisation exclusively tasked with eliminating foreign spies - who isn’t just an average KGB bloke like those we see murdering all over the place recently in tsar Putin’s service - but a full scale psychopath in werewolf mode who gets a monthly victim served by his masters.

All these elements were thought up by Fleming not in his journalistic profession; not with any kind of documentary aspirations or claim to be faithful to anything but the needs of the entertaining value of the tale.

Likewise, DIAMONDS ARE FOREVER was conceived as nothing but amusement. It’s not the film’s fault 50 years later people demand continuity in every single cut and more logical stringency than corporate law.

I haven’t watched the video for Diamonds are Forever, but generally I enjoy these videos. They can be good for a laugh and to poke some fun at all types of movies.

A part of Bond’s charm is the element of romanticism. The idea that one man can sneak into an enemy base, get captured and not killed on the spot, destroy the base and then escape. Reality is stretched, but that’s why it’s so powerful. We buy in to the escapism because we want to be that man. And it’s not just the man, but the world in which he inhabits which makes it all possible. That’s the element that DAF, MR and those types of Bond movies especially nail.