I can’t believe I have only just thought of this,and I apologise if it has been asked before…

Was bond’s Aston Martin a secret service car or actually his? The reason I ask is, if it was a Q branch car, surely it would have had bullet proof glass? Therefore Mrs bond would not have died?

Also, why are blunt and blofield in a right hand drive car if they are in Portugal?

New bullet proof glass was apparently not put in after its destruction during a former mission. Maybe a problem with suppliers. Or a hickup on the order.

Bunt‘s car, of course, was not bought in Portugal. Spectre does have its own specifications, too, when ordering a new assassination car.

The reason I ask is, if it was a Q branch car, surely it would have had bullet proof glass? Therefore Mrs bond would not have died?

At the end of the day there’s no real way to tell if it’s a company car or personal, but you could also argue that a company car might not necessarily have bulletproof glass.

For instance - the Aston in Thunderball had that shield thingie pop up from the trunk when the baddies were shooting at it - not needed if the glass was bulletproof, no?

Yes, I know that the windows are wound Down,but the bullet hole is clearly in the windscreen

I don’t see Her Majesty’s government giving a company car for a staff members honeymoon. 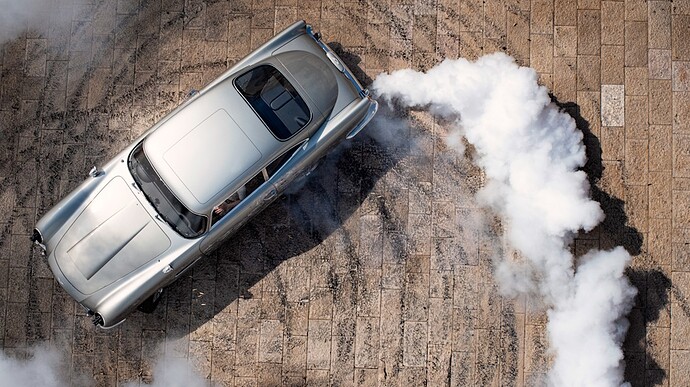 Q will definitely get fired. He was only asked to rebuild Bond’s own car.

Bond and the Whishaw Q is a very unhealthy relationship.

Was bond’s Aston Martin a secret service car or actually his?

It was the sixties and these things are best left hanging in the physchadelic air.

Also, the car was still running under property of Sir H. Bray.

It could be either one. Q Branch wasn’t in the habit of including bullet proof glass in the 60s, as witness the damage done to the DB5’s windshield when the little old lady shoots it in Goldfinger. There are clearly holes there, and Bond considers it enough of a threat to reverse course and eventually get himself captured, even though he was mere yards away from the exit gate.

Q Branch wasn’t in the habit of including bullet proof glass in the 60s, as witness the damage done to the DB5’s windshield when the little old lady shoots it in Goldfinger

When Q gives him the car he says “windscreen bulletproof, as are the side and the rear windows.”

He actually is Blofeld´s uncle…

Bulletproof is perhaps a bit misleading. It’s probably bulletresistant up to a certain calibre/velocity. Say handgun of .45 calibre maximum.

The old lady uses a Schmeisser MP 40 (if memory serves) in 9mm and on very close range. In a car with ordinary windshield glass that would mean the windshield disintegrates entirely, accompanied by significant parts of Bond’s head and upper body. That he’s even able to manoeuvre away from her implies he was protected, just not enough to keep multiple projectiles from destroying the windshield partially.

Q Scene: We’ll say this because it sounds cool.

Auric Enterprises Scene: We’ll do this because it looks cool.

That’s as close to thorough planning as you get in a Bond film.

Anyway, the model George drives is unique to OHMSS and doesn’t display any special capabilities on screen, so we may fairly assume that it’s a personal car. And that unlike in the Craig era, having taxpayers shell out to have your personal vehicle outfitted with weaponry that can slaughter people by the dozens was a no-no in the 60s.