Talking about boycott: how many cinemas will the market actually carry in a post-COVID-19 world? Is it possible the market as a whole will be significantly smaller? For a significantly longer time than just months?

With the deal on table now cinemas would get their share of the later stages of the marketing. I should think that’s a valuable asset which strengthens their position. Would a boycott really be a realistic alternative? It sure would hurt both sides, theatres and studios. But the studios could then decide to just push theatres entirely over the edge. It’s the studios who provide the content after all.

The sensible way, to me, would be to try and find an agreement as long as cinemas are still in a position to make concessions. In a few weeks that may no longer be the case.

and a certain percentage of the audience simply won’t go to a cinema.

In my continuing effort to be helpful from this side of the pond: 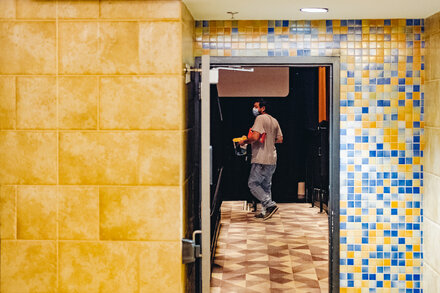 Would You Go to a Movie Right Now? Republicans Say Yes. Few Others Do.

A survey shows that the partisan divide on the coronavirus goes beyond masks. It extends to dining out, getting on a plane and resuming other activities.

It all comes down to this: do you believe in facts or in defending the indefensible for simple political reasons.

As a model it may not be what anybody in the industry really wants - shared profits from VOD eat into the entire calculation - but it’s probably the best possible option for all sides under the circumstances. I still wouldn’t chance a cinema trip, but for those who absolutely have to there’s the option. And it helps theatres surviving. So win-win. Or at least less loss-less loss.

It’s probably just a side effect of the lack of oxygen due to mask wearing.

Can’t be, because those people usually refuse to wear masks.

It’s probably worth noting for the purposes of NTTD that the speculation is that this will not be happening internationally (at least right now) and Universal isn’t releasing NTTD in the US, so currently it is not affected…

“In addition, I also understand that this AMC-Universal deal is a stateside experiment only, and that terms for whether this deal goes down in foreign markets has yet to be discussed. Three-quarters of the world’s exhibition is international, and sources say it will be difficult for Universal to reach similar international deals.”

Would this really matter for NTTD anyway? Isn’t Universal only the international partner?

Would this really matter for NTTD anyway? Isn’t Universal only the international partner

That’s what I was saying 2 posts above. As it stands today this does not effect NTTD.

AMC Theatres and Universal Pictures’ deal to dramatically shorten the amount of time that movies play exclusively on the big screen is resounding like a thunderclap across the film business. …

While Universal confirmed the deal won’t apply to tentpoles such as “No Time to Die,” where the studio is only handling international distribution (MGM will roll out the film in North America) it’s unknown exactly how many films will fall into the agreement.

AMC held no cards and tried to bluff Universal. Universal got what they wanted. Now, with AMC in their pocket, Universal once again holds all the cards. Cineworld has nothing.

Imagine if I got to see the film in Australia this year - with American and UK fans in limbo until 2021/22. How cruel would that be? But then again, other countries always get Bond films before us, so…

I already know that I won’t either. The Coronavirus will have gotten me long before this thing gets released in whatever form they decide to release it in.

At least I got to play The Last of Us Part II before succumbing to coronavirus.

Remember that Cineworld isn’t quite bluffing the way AMC had yet. AMC is the only one that blanket banned Universal’s films - arguably overreacting in the wake of the Trolls release. And that overreaction is what allowed Universal to work this out.

While the US is still having the ‘mask debate’ (that sounds great when the kids edit a load of newscasters saying it in quick succession), it will be one, less of prepping, and more of deferring - to at least 2021.

But the only thing Cineworld can fall back on is a ban of Universal’s movies. Cineworld needs Universal. Universal can survive without Cineworld.

(Keep in mind I can survive without Cineworld too since I’ve never even heard of them.)