On a related note, I really don’t get why the SIS doesn’t open a merchandise and fan shop on its premises. You could make millions with mugs and T-shirts and hats with the SIS crest and the motto: Make Intelligence Secret Again! Just wait till the final COVID-19 bill arrives, then they’ll need every penny…

Of course, the gift bag is stuffed with disinfectants and the cool new facemask with 007 logo. Collector´s item: masks with NO TIME TO DIE engraved in gold!

Might be worth it to get the disinfectant. Can’t find that stuff anywhere, but then that’s probably because I’m not a millionaire who is deserving of such a truly essential product.

They really should do the No Time To Die facemask. Both a perfectly apt and yet at the same time completely tone deaf statement to put on a piece of PPE. 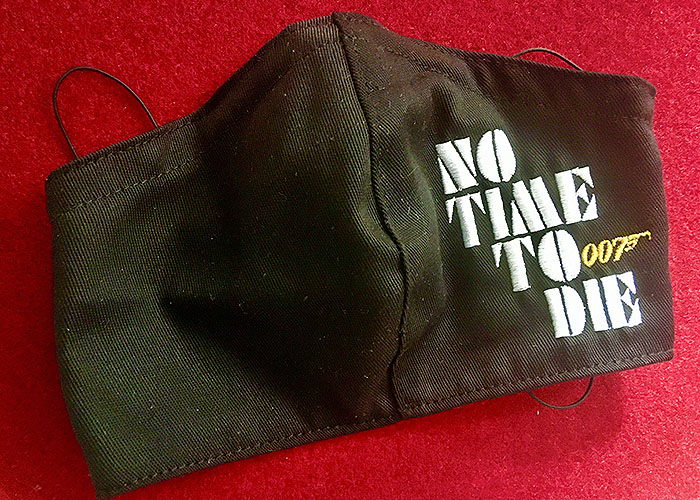 No idea if these are official, but we had five of them in a raffle of the German Fan Club (didn’t win one, though).

As for desinfectant: a bit overrated. In daily life, washing your hands thoroughly with soap (at least 20 seconds, hum “Happy Birthday” twice while your doing it) is sufficient in most cases. Soap destroys the grease film around the virus that it needs to survive. And keep your hands away from your face.

Satire these days is always too late.

And yes, washing hands with soap is the biggest and most effective weapon against this virus we know of so far. (If one gets tired of singing “Happy Birthday”, by the way, and is a “Star Trek” fan one can also recite “Space… the final frontier. These are the voyages of the starship Enterprise. Its ongoing mission to explore strange new worlds . To seek out new life and new civilizations. To boldly go where no man has gone before!”)

Okay, this may be the subject of its own thread, but if NTTD goes streaming which service would carry it? Watching the extended cut on HBO Max makes me thing they would carry it. Thoughts?

Amazon Prime - MGM already have a relationship with them.

Ah, rgr!!! Was not aware of that relationship. That would be great for me, already a Prime member!

It would definitely boost the Prime program.

It’s so obvious that a VOD release needs to happen that Eon and MGM are looking increasingly deluded in expecting anything else.

Unfortunately, such corporations are predicated hugely on shares, which is basically another word for confidence. They could do it, but they would have to sound really confident themselves in order to inspire it in others.

Agreed. If they’re holding out for full theatres and a worldwide release, they’re dreaming. Which is probably not a bad bet, because if NTTD’s development is any indication, they spend most of their time fast asleep.

There is a grim irony that all the right wing Bond fans have awful right wing leadership to thank for their precious movie being delayed indefinitely. Whoops! Instead of getting all pent up about a black woman in the lead, maybe should have dedicated some energy to not electing leaders with worms in their brains!

It´s really irritating, to me at least, that nobody just wants to speak the truth: no premiere, no cinema release

You mean like the states which are still not closing restaurants and bars even as they experience record numbers of cases?

Broadway will not open until next spring. The first opening is scheduled for March 15th.

BUT WHAT ABOUT OUR SHAREHOLDERS!!!

And that sums it up: the idea that companies exist solely to maximize benefit for their shareholders and not their workforce or their communities. Neo-liberalism and its economics are not looking too good right about now (think Hugo Drax expelled sans spacesuit).

I would also think that Comcast’s VOD service on their cable packages would carry it as well, seeing as how they own Universal.

Okay, this may be the subject of its own thread, but if NTTD goes streaming which service would carry it? Watching the extended cut on HBO Max makes me thing they would carry it. Thoughts?

It’s not my field of expertise, but I would reckon HBO Max would be out of the question in the initial phase as it’s not yet available worldwide.

I wouldn’t think that it would be available on the individual platforms like HBO Max or Disney+ or other such streaming platforms, as those are set up where you can watch whatever you want on the platform just by paying the monthly fee. This wouldn’t make much financial sense for MGM, EON, or Universal. Platforms like Amazon, where you would have to pay a fee to view the movie on top of the standard membership fee, are the direction that they would go. Apple would probably get in on it as well.

Comcast would also almost certainly carry it on their VOD platform that is available to their cable subscribers, as they own Universal. There are a lot of avenues that they could use to get the film out, but the subscription-based services like HBO Max and Disney+ and the like almost certainly won’t be the method of delivery.

Only if HBO Max, Disney+ would be willing to pay a mad amount of money for the rights to have it…given these two services studio affiliations it’s not gonna happen however I could see Apple being willing to pay a good sum for this for Apple TV+. Netflix and Amazon? They’re using that cash (debt) to finance their own movies…unlike Apple which isn’t really in that game just yet - to the same extent as those established SVOD film market leaders. A move to SVOD for this film wouldn’t be about relationships but who’s gonna be the highest bidder, to recoup that $200m budget for MGM/EON and any potential profit from box office that would have been gained from a traditional theatrical release. The most expensive acquisitions for a completed film remain only in the $70-75m range - Greyhound starring Tom Hanks (was meant to be out last month from Sony in cinemas, Apple TV+ picked it up and is releasing it later this month) and the live recording of the Hamilton musical (picked up by Disney for theatrical release next year, now dropping on Disney+ this weekend).

But what Universal’s really been pioneering here during this pandemic is the premium VOD thing with the $20 for 48-hour rental. If No Time To Die opts for a day-and-date theatrical/home release or a straight-to-home drop, that’s the way they’ll do it. You guys have mentioned Amazon having these premium rentals - Apple has them too with iTunes, and so do all the major digital platforms.

Apple is already in the game, producing and needing content for Apple tv +

And they were rumored to negotiate rights to the Bond films.

Yeah but as I said not to the same extent as the others with films specifically, the new Scorsese is the first film they’re actually producing and - along with that Tom Hanks Greyhound film they acquired completed from Sony - the highest profile title they currently have incoming.

Not to be nerdy here - but Apple has a huge production slate, with their own content already on their platform. They want to be in the game, they need to be and they are.

Landing NTTD would be exactly what they are striving for.

I know but as I said, not for films specifically. Apple’s got a very packed and varied slate of shows.

And yeah I agree they definitely do want to be in the game, that’s why they went for the Scorsese, that’s why they jumped on the Hanks Sony film. If it comes to it with EON and MGM taking NTTD to streaming if imagine they’ll be front of the queue.