Moneypenny goes undercover as Jacob Rees-Mogg’s assistant–think Holly Goodhead in MOONRAKER. She is found out when Rees-Mogg discovers an old photo of her driving an electric car. He decides that he will cover her body in crude oil

For a moment there I thought this was going to end with some fracking.

How about a bi polar Bond: Glum as Daniel one minute, giddy as Back Seat Driver Brosnan the next.

How about a bi polar Bond: Glum as Daniel one minute, giddy as Back Seat Driver Brosnan the next

So, they’re searching for a new Bond who will commit to the role for a decade. So, he’s going to be doing what… 1, 2 films?

No Doctors
From Trussia with Despair
Diamonds are Worthless
Live and Why Bother
The Man with the Gold… that’s it. One man. All the gold. Bastard.
Moneyraker
For Rich Guys Only
Sharefall

We all have lived or lived with that. No spine apparently makes one more elastic, though.

EON probably knows they screwed up in how they handled their main actor in 2002 and therefore went all out or in with DC.

But Brosnan has not forgotten: 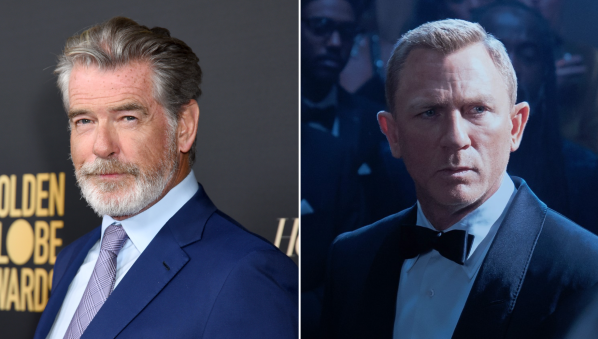 Pierce Brosnan Shades ‘No Time to Die’ and Shuts Down Next 007 Question: ‘Who...

Pierce Brosnan kicked off his “Black Adam” press tour with a new profile in GQ UK, and it appears the actor is already bracing for an onslaught of James Bond questions this press cycle.…

I cannot blame him if he’s a tad resentful or bitter. He was popular, was heralded for rejuvenating Bond for the post Child War world, had great box offices, but was then unceremoniously dropped over the phone and had to spend the next 15+ years hearing Eon (particularly Barbara) talking like Craig saved the franchise (after Pierce put it in jeopardy? There’s an odd revisionist history of Pierce’s tenure by much of the public and Eon) and then doing anything and everything to keep Craig happy, after doing barely anything for him.

He probably feels even more burned because two of the people who arguably brought down his movie’s qualities have been on Bond longer than he was Bond: Purvis and Wade.

A more planned out version of Blofeld and Spectre perhaps? We probably should expect them back in the near future.

Interested to hear more about what their plan will be. If they’re looking for someone to take the job for 10-12 years, that puts, thankfully, people in their early 40s back in the running. Hopefully their aim for that 10-12 years is to make at least four films, although I wouldn’t be surprised if that, after all of the criticism for the revisionist plots of SP and NTTD, that they are currently looking to craft a trilogy that is at least, to some degree, planned out in advance.

As far as who it should be, all I’ll say (again) is that they just need to go ahead and get Rupert Friend.

Make Bond a human spy. Also, give us villains who we love to hate, in a good way. Remember, movies are a group effort. Both sides, (EON and us), need to remember that. I think that for other writers, besides Purvis and Wade, EON should look at people who have written Bond before. Not just Anthony Horowitz and Kim Sherwood, but do what IFP did with Kingsley Amis and Raymond Benson. Just a suggestion that both sides to consider. Not just Oscar nominated people and whoever is hot at the moment.

Writers who only write novels rarely know how to write an effective screenplay.

A fact too well known among Bond fans. Brought us Kevin McClory.

But Brosnan has not forgotten:

I don’t think they handled Bosnan’s exit well at all. However, I think he should let it go and happily reconnect to the series for anniversaries and the occasional premier. At the end of the day, he benefitted an awful lot from being Bond.

But I also think he has every right to like or dislike the films. Or to express that he does not care who will take over. Why should he?

He definitely has the right. But I think he should ask himself if wants to come across as a bitter old man. Maybe he does or just doesn’t care how he comes across.

I was sitting with two double bourbons inside me thinking about life and death when the Bond #7 casting came into my mind. What an enormous weight of history and expectation for a young actor to take on. It’s not just following Craig, but inheriting the legacy of Connery, Moore and everybody else. Actors tenures develop as the films progress, but more or less, the next man will need to be Bond straight away. To have the required X factor that makes the role special, and to have the audience invested enough in them to continue the journey.

It is a massive weight. No one wants to be called the next Lazenby or even Dalton (great but at the time considered a failure).

But for a young actor Bond also is a potential ticket to a huge career, and every casting sets you up for failure. Don’t think about the past, just do the best you can.

The most difficult thing about Bond No. 7 is the conception of this new phase.

Nobody wants a Craig copy, but nobody will want to be able to get less character development. Or less script approval.

This will be the real challenge. What kind of Bond will the next one be?

The new guy will be fine. With the exception of Moore, the actor’s first film is always their best. It’s only once they begin actually trying to tailor the films towards the perceived strengths of the actor in question that the films begin to fall off the rails. The new guy just has to show up, be “generic” James Bond, and it will most likely be fine.