Who Plays "I'm looking for Mr. James Bond, Just Give Him My Card" in Dr. No

Near the beginning of Dr. No, a man from MI6 goes to Le Cercle looking for Bond. All he says is “No, I’m looking for Mr. James Bond. Just give him my card will you?” 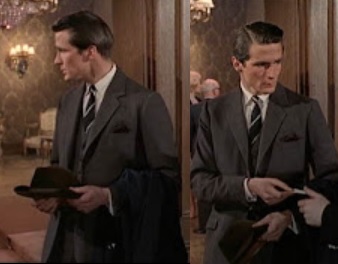 Who is this actor and what is his character called?

Need to know for a project. Thanks a lot!

I’ve been through IMDb, script transcripts and other pages with no luck. One interesting theory someone had is that he is bill tanner (which is a theory I love and am willing to accept as my personal head cannon)

I checked the James Bond Encyclopedia and no luck. Now I’m very curious as well.

I’m sure I’ve read about the guy in some thread, must have been years ago. Not so sure whether his name was mentioned.

The gist of that discussion was about whether he would have made a passable Bond himself if memory serves.

It’s Gareth Mallory. He’s looking to recruit the new James Bond 007 following the death of the previous one.

If any human being on the planet knows, it’s Bill Koenig at The Spy Command. I don’t want to post his personal e-mail here, but he does have it on his blog if you go there.

I thought it might be in Cinema Retro’s magazine tribute to DN from a few years back – Lord knows it’s full of more details than any other reference I’ve seen – but no dice.

Curious, considering his prominent placement at the start of such a historically important film. Someone has to know.