It’s well known that Sean Connery’s favorite James Bond film that he did is From Russia With Love and Roger Moore’s favorite 007 film that he did is The Spy Who Loved Me. But what of Timothy Dalton and Pierce Brosnan? I’ve never heard either of their preferences. Does anyone KNOW if they’ve ever stated which of their Bond films is their favorite and if so what those are? (It’s too early for Daniel Craig and George Lazenby’s is obvious.) Just curious. Thanks.

It’s why he chose to do it as for that watch along he did a few months ago.

I believe Craig’s might be Skyfall, but don’t quote me on that. I believe I’ve heard Brosnan refer to Goldeneye as his favorite.

I’m not surprised about Brosnan–it’s what I would have guessed–but I’d never heard officially. But I have no idea about Dalton. His favorite easily could be either one. I don’t think we can really learn about Craig’s favorite until about 3-5 years after No Time To Die is released (whenever that turns out to be). 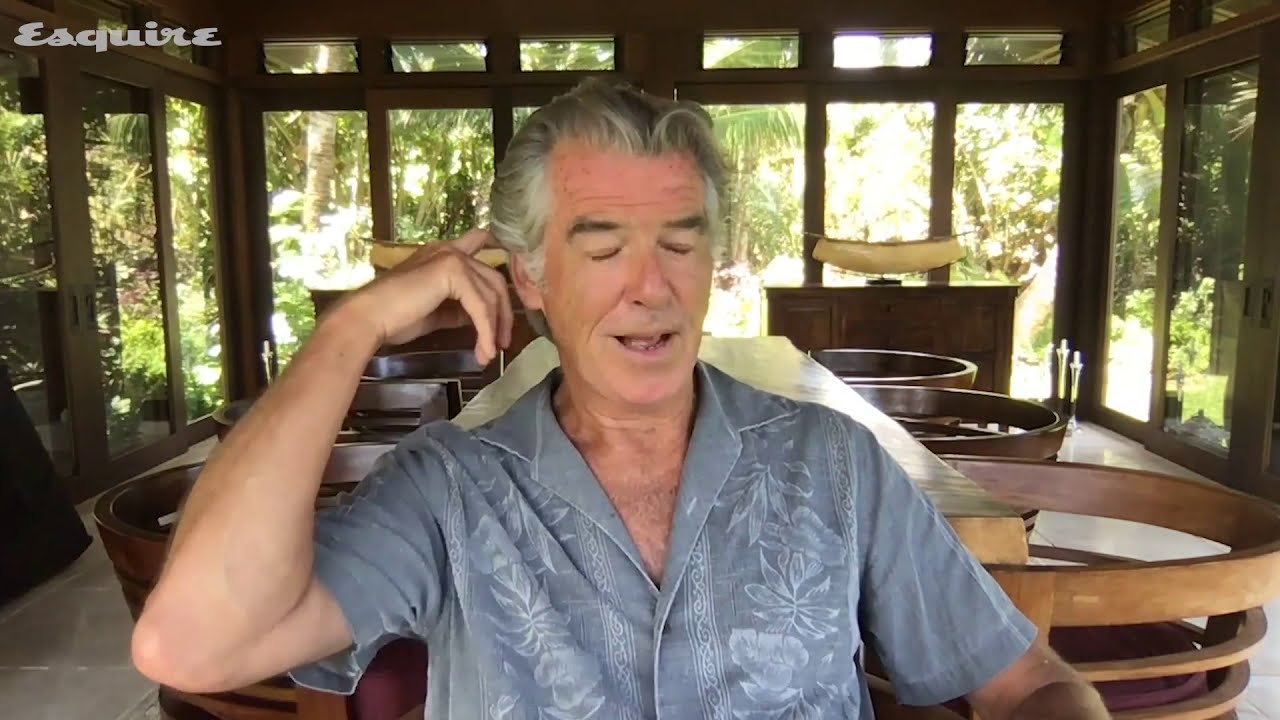 He mentions it at one point during this.

If I had to guess for Dalton I’d say Licence to Kill as it’s the darker and more personal story he was looking for.

Then again it’s hard to predict which an actor’s favourite was as the experience of shooting is likely to affect their opinion more than the finished film.

Looking back at Dalton’s two films it’s not easy to guess which one is his favourite. LICENCE TO KILL may be more what he had in mind for Bond - but the production was really close to shoestring level in parts and if you look at it today it really shows, especially when compared to THE LIVING DAYLIGHTS.

Also, his first Bond film wasn’t riddled with too many silly gags and definitely had a ‘cold war’ vibe to it - whereas the revenge story of LICENCE is rather simple and not showing his Bond as anything else than out for Sanchez’ blood, regardless of the consequences. Would Dalton prefer this from today’s perspective, where the personal angle has been done to death in Bond films since? I’m undecided.

I once read in an interview with Dalton that he was not realy contend with LtK, because he thought it was a movie with just one main topic, revenge.

Thanks. I’d been meaning to get around to this. So that gave me a good excuse to watch it.

For Dalton it may be more personal than an objective analysis of the films’ strengths. I’ve always heard he had friction with John Glen and didn’t want him to direct his third Bond, should it happen. Also he bailed out of that Christopher Columbus movie as soon as Glen replaced the original director. If – as this seems to suggest – they didn’t get along, it may be that LTK was more of a trial for him than TLD.

I should clarify that Dalton has never publicly put down Glen that I know of, and Glen was complimentary to Dalton in his book, “For My Eyes Only.” Also, maybe Dalton 's defection from the Columbus film was a sudden premonition of what a steaming turd it would turn out to be. Seeing the Salkinds listed as producers should have been his first clue.

With Dalton still in the lead it would have been a much better movie, I’m sure of it.

Looking back at Dalton’s two films it’s not easy to guess which one is his favourite.

The Wikipedia listing for The Living Daylights cites a book called ‘James Bond Unmasked’ which claims Dalton prefers TLD over LTK. If that is the case, I think the thrill of it being his first, and the Cold War feel, would probably factor in to his thinking.

I suppose the budget of LICENCE TO KILL was truly a kicker to the overall atmosphere on that film. Productions are notoriously short for money, the trick is to make every department feel like they are the ones making it all happen. But when you effectively only get enough funds to fail in style it’s difficult to keep morale up. Dalton as the ‘new kid’ would probably have felt it sooner, and perhaps more, than the seasoned hands on deck.

Had he already done four films with the team they’d have been through a lot together and perhaps still had fun while choked by the budget. As is the production was probably lucky to even turn out the way it did. Can’t fault Dalton for preferring THE LIVING DAYLIGHTS.

I have that book and forgot reading about that part. It does say that Timothy Dalton prefers The Living Daylights but it has no direct quotes of him saying so. However, it does quote him saying about Licence To Kill:

“I thought it had a good story but it was too dour,” confided Dalton, who prefers The Living Daylights. “Of course, it was first called Licence Revoked, but MGM didn’t think anyone would understand it…It had that one theme of revenge. And it had a go at establishing a different kind of Bond. But it dragged it away completely. Why can’t you have both–seriousness and droll, cynical wit?”

So if this quote is accurate–and there’s no reason to think it isn’t (it certainly sounds like Dalton)–then it does seem to imply that he preferred The Living Daylights. Although, I would feel better if we actually had a quote of him saying so. Still, good find Sharpshooter. Thanks.

That quote would reinforce my own intuition on the matter.

I’ve always felt the filmmakers saw TLD moments like the confrontation with Pushkin and the reaction to Saunder’s death and thought, “Whoa! That’s new! He’s great at rage! We need more rage!”

But LTK, as that Dalton quote would imply, is a one-note film. It’s all rage all the time. Dalton is capable of more than that; he has range. He is capable of charm, and humor, and all the other things the Bond image called for. Some of the one-liners in TLD may have fallen flat, but they weren’t written that well, either, were they? When he tells Kara he’s “absolutely not” going to retrieve the cello but then we see them back at her flat anyway, that’s funny to me. Little moments like that that arise from the relationships between characters and not someone saying, “let’s toss in a cavalier bon mot here” work for Dalton.

I don’t know, LTK may be a “bold” foray into new territory, but to me it seemed equally like a surrender, as if they were saying, “we admit he can’t do the Bond role as it’s become known, so we’re going to redefine it to compensate” . It’s not the job he originally signed on to do.

It’s not the job he originally signed on to do.

And had he been hired to do this he might have wanted to do it in another manner and with different material.

In talking about The Living Daylights here is a couple of quotes the James Bond Unmasked book uses:

“There was little preparation for the first film,” Dalton recounted. “I was just flung into it. I remember the press conference was the biggest I’d ever done. It was hell with 600 people all shouting at me and masses of cameras from all over the world. I just started doing it. You can’t think of it as being different from any other job. You do it scene by scene.”

“I simply said don’t write for me,” Dalton revealed. “Write a wonderful Bond story where there’s danger, where there’s humor. And my job was to play it, to fill it out.”

Here’s a couple more quotes about his thoughts on Bond and the series:

“I read the novels and saw the first three movies,” Dalton recalled. “You realize immediately that the films aren’t really like the books. Or they had become completely unlike the books. By the time I came in to do the first one, Bond was sort of jokey, flippant. But people liked that. The books were tough. In [The Living Daylights] short story, he’s popping pills–he’s doing uppers–so he has to stay awake for like three days on the job. And, of course, he drinks and does all the kinds of things that they did try to capture in the beginning.”

“Whatever one says or whatever one would like to do, you have to deal with the concrete,” Dalton revealed. “Every single person who works on a Bond movie, be they sitting in a production office in London or in Los Angeles with hands on responsibility, has their version of what a Bond movie should be: either because they love it or because they think it will be commercial. So they’re always applying a historical preconception onto something that you’re doing now–me too. And that sort of hinders almost everybody in the process. For example, you know what a James Bond poster looks like, don’t you? How many times has the poster changed? Why has it changed? Because ultimately there are a lot of commercial decisions made and there is a lot of molding.”

And lastly, a quote about working as Bond:

“It’s hard,” Dalton reminisced. “Twenty weeks, 15-hour days. It was very tiring. You’ve got to meditate, you’ve got to concentrate. It’s interesting these long shoots. You see wonderful freshness for about six weeks, then there’s an ease, and then you go on automatic pilot. There it is–for better or worse. But I do not regret for a single second doing the Bond films.”

Yes, that’s the one I remembered and said that he prefered TLD over LtK, but I couldn’t remember which book it was I read it in. Thanks.

Thanks, but credit goes to Sharpshooter for finding the reference to the book. I just owned the book and supplied the quotes. I’d read it years ago, but had actually forgotten it had those pertinent quote(s).

Thanks to both of you!

What I remember of this book is that there were a lot of quotes of the Bond actors, but in the last part of the book there were the complete interviews including the same quotes, so you got a lot to read twice, which I didn’t find very interesting to read.