I casted new Bonds completely and this just a teaser Another copy I also casted the Bond girls, M, Q, the main baddie etc with no actors from the franchise included

NB: Solange is 007 in New York
Hildebrands are Rare is self- explanatory
Tomorrow Always Comes is John Gardner’s idea for No Deals
And ColdFall the US name for Cold is so much better imo 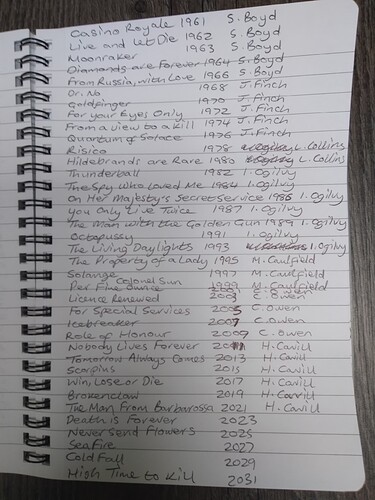 Oh my god, can you imagine if 2021’s Bond film was The Man From Barbarossa?

No Gardner novelisations of Licence to Kill or GoldenEye? Or Benson’s TND, TWINE and DAD novelisations, the last two of which are improvements over the films?

And would Win, Lose or Die still feature George H. Bush and Gorbachev in 2017 as a 1988 period piece, or be updated?

Great points about the films that became novelisations

However, in my defence they were not films in this timeline but could be going forward

As for the other books, well I literally ran out of time.
I made it to 2021, though now you have me considering a Never Say Never Again scenario in which a rival film company made Licence to Kill onwards…

As for Win,lose or Die I guess we have you go with Obama, Putin etc