And I thought my own collection was quite impressive 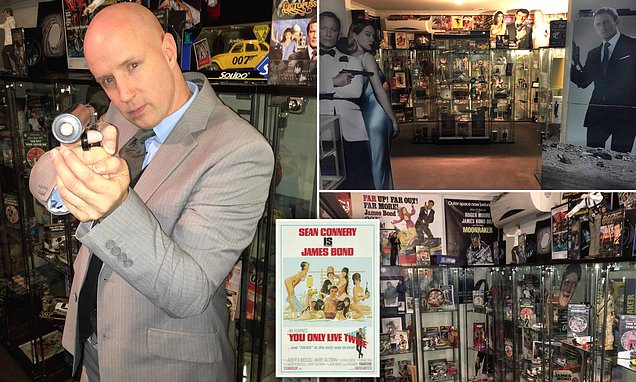 Stephen Sherrard-Griffith, 44, has spent 21 years building his vast 4,000 item treasure trove from the Bond films and novels and says he's determined to keep growing his collection.

Impressive, yet… sad and cause for worrying.

Great collection, but yes, dumping a girlfriend over a poster is extreme.

Well, he can’t place too much import on his posters. He bent/folded that wonderful Gouzee Moonraker advance from 1978 to fit in the corner of the room (!!!) when a little planning and measuring ahead of time would have made it unnecessary.

I’ll never be this guy because if I’m totally honest, 90% of Bond merchandise is pretty lame anyway. Eon’s never done a good job of marketing the property AFAIC. I’ve passed up a lot of purchases in the last four decades and so far I’ve regretted extremely few of those decisions.

Also, there is this thing called life.

Most of it is not realy special. It looks more than it is, it is the regular stuff which a lot of people have in their collections. Only the big DB5 I’m not sure what it is, anyone?
For the rest it’s a lot of sideshow, AutoArt, Big Chief Studios, corgi etc.

But getting the figures and modelcars out of the original boxes is for a real collector a huge crime, you can’t do that!!

I’ll never be this guy because if I’m totally honest, 90% of Bond merchandise is pretty lame anyway. Eon’s never done a good job of marketing the property AFAIC.

Yep. The majority of my collection consists of books and the movies on Blu-Ray. The only other pieces of my merchandise consist of vehicle diecasts, a trivial pursuit game and little things like that.

I have the blu-ray set, the Fleming novels, and a few movie posters that are currently collecting dust in storage. That’s as far it will go for me until the day I can afford an actual DB5.

I actually like that there are collectors preserving some of the older stuff like the '60s toys and merchandise. Keeps it all from getting completely lost to time.

I used to have the Corgi Moonraker shuttle and helicopter.

He looks a little like Blofeld, maybe he can do some surgery and get a realy nasty scare to get the perfect look?

In his defense about the girlfriend, that is a really rare You Only Live Twice poster (the only official design I haven’t procured yet!) And pretty much all of my girlfriends were fine with posters I had on the walls.

But getting the figures and modelcars out of the original boxes is for a real collector a huge crime, you can’t do that!!

Most Bond collectors have two Aston Martin DBV’s–one in the box, and one to play with!

Other than the rare Thunderball board game, most of my collection is books, posters, CDs, video games, and video formats (VHS, DVD, Bluray, Laserdisc!) But I try to limit it to a bookcase. Posters were probably the most ridiculous because you run out of wall space fast.

If you look closer he has almost every figure and car out of the boxes, that’s not done and most collector’s have not two of just one version of a DB5, but have DB5’s in all kind of versions and brands.