I always found Vlad in “Die Another Day” amusing.

Paula in Thunderball, if only for the fact that she was in one of my favourite Hammer Horror films.

“Hey boss, he beat your time,” to which Graves gives an angry glare. Classic.

Machine Gun Granny from GF
Klaus Hergesheimer from DAF
Mrs. Bell and the guy who drove the chicken truck in LALD
The room service guy with the champagne from TMWTGG “Oh, a Surprise! Hee hee hee!”
Ironically all from Guy Hamilton films. He had a real knack for sprinkling interesting little characters in his Bond films.

And of course, Victor Torjansky.

How could I forget Klaus? Shame on me, and thank you!

How could I forget Klaus? Shame on me, and thank you!

And, of course, Morton Slumber

I demand a Shady Tree series on Amazon Prime. Similar in spirit to Joaquin Phoenix’s JOKER. A struggling stand up comedian loses his mind in the fabulous Las Vegas.

I’m wondering if Corrine Dufuor from MR counts. It’s one of those instances where the supporting, or billed second Bond woman was better than the leading lady (Holly Good head). She had better chemistry with Moore, even though Bond was using her as bait (a running theme throughout Moore’s tenure). Wish she could stayed around longer but the audience would have missed out on one of the best death sequences of a minor character in a Bond film.

Wish she could stayed around longer but the audience would have missed out on one of the best death sequences of a minor character in a Bond film.

Interesting that it’s in 2 Lewis Gilbert films that the “sacrificial lamb” is shown and is quite chilling (Aki in YOLT along with Defour). Most of the time, we’re shown the outcome rather than the demise (from Kerim Bey, Paula, Anders, the italian bloke in FYEO). It’s left to our imagination to fill in the blanks.

Trying to recall how graphic Saunders is in TLD (in OP and Vijay, it doesn’t take much to figure out what happens next). While we know how he’s getting it, it’s TD’s reaction that is priceless (I think SAF had that meme up somewhere!)

I liked Aki way more than Kissy in YOLT. IN fact she’s one of my favorite Bond Girls of all time. I thought her character was much better written and developed than that of Kissy.

Yes, Aki is one of the best Bond girls from the Connery years.

I also liked Raoul, Bond’s contact in Cuba from Die Another Day, he could have been one of the great Bond allies, unfortunately he’s only a couple of minutes in the middle of the movie.

One of the rare highlights of that movie. Clearly a nod to Kerim Bey, but not too overdone.

How did this thread get this far without anyone mentioning the classic character with to little screen time: FYEO’s Luigi Ferrara

Roger Moore as James Bond in A View to a Kill. For large chunks of the film he is St.John Smythe, James Stock, Remy Julienne and various strawberry blonde stuntpersons. I think he’s James Bond for about 25 minutes, all told.

I liked St. John Smyth! Moore seemed very comfortable as a trust fund baby who still hasn’t grown up in his fifties.

The coloured bloke with the flute, sitting in the graveyard in LALD who says " a beeeeeautifullll day" 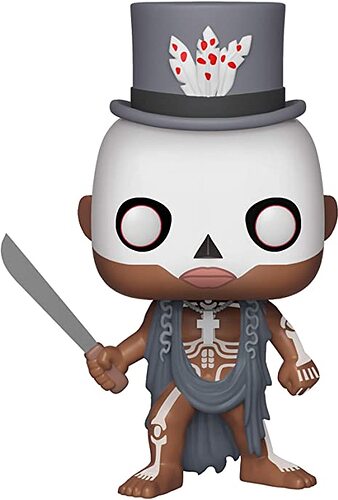 You mean Baron Samedi? Kananga’s right hand man? He got lots of screen time, unlike Mrs. Bell and the guy who drives the chicken truck (honk honk).

The old guy with the broom, who’s whisteling Goldfinger in O.H.M.S.S. Who is he? Why is he there? How does he know the Goldfinger theme?

Could be ‘Moon River’.