Bond and Sexual Ethics - Are there any?

In Bond 26, what is the appropriate sexual ethic between Bond and the Bond girl (and maybe there needs to a new name for female leads in Bond movies, as Bond girl makes it sound as if she is a masculine possession/prerogative):

Mod note: This was split from the This or That game.

This would entirely depend on the story, its characters and requirements. I can imagine a storyline where Bond needs to actually get close to a character - even without a classic seduction or sexual encounter - or one where he’s both seducing and being seduced at times, ideally when he’s still trying to work out a mystery element. The Silva/Severine element of SKYFALL would lend itself to turning the tables with Severine seducing Bond and work out with the same result.

The basic question about the appropriate sexual ethic between Bond and heroine is flawed though in my view. Appropriate would be whatever the story calls for. And we’ve seen them used in various iterations before. So the conclusion would be - as far as the sexual ethics of the hero may differ from his general ethics - that it depends.

Is what BB has run with since she took a major role in production, so, I’d imagine, that will be the starting point with the script before the director and his/her “script polisher” come in with their unique idea of (say it with me) “A Bond girl who is unlike any you’ve seen before…she’s really Bond’s equal”

My preference would be that a woman will not immediately fall for Bond. Too many films have him enter a room and the woman just fawns over him.

I want him to actually have to endear himself to her.

And I don´t mean the usual trope of the Brosnan/Craig eras which had the woman sneer at him first but then inexplicably fall for him anyway (the dreaded “she’s mean to him but inside she really likes him” trope).

I like the Bond/Kara-relationship in TLD. Although Kara was more of a naive, submissive character, Bond did not force himself on her but tried to get to know her. More of that, please!

The one thing the original series (meaning the films until LICENCE TO KILL/with some reservation perhaps until DIE ANOTHER DAY) had going for it was the presence of Moneypenny as a woman who flirted with Bond but was not approachable in a sexual way. A colleague and fellow SIS member*. This at least hinted at the possibility of ‘ordinary’ human relationships between the genders in the Bond world.

Breaking that rule with the satirical scene in DIE ANOTHER DAY was perhaps not adding to that film’s appeal. Doing it once more in SKYFALL straight-faced - even if it’s only alluded - didn’t make it a better idea.

I would welcome a glimpse of a Bond interaction with the opposite sex that didn’t involve sexual elements. A reason Della Leiter came across creepy in LICENCE TO KILL - and the countless fawning bit player actresses from the Moore years don’t make that trope more endearing. It’s on par with the same idea in TINKER TAILOR SOLDIER SPY where (hopelessly) yearning secretaries lust after an unmoved Cumberbatch because his role has been changed for no relatable reason - a satirical element that falls flat.

*Amis called Moneypenny the sister role in the Bondverse.

First, thanks for setting this thread up Dustin.

Appropriate would be whatever the story calls for. And we’ve seen them used in various iterations before.

I want to expand on this notion. A story-in the sense of narrative/plot–does not call for an ethics–or rather, it calls for it secondarily. The creator first provides her story world with an ethics, which his story then follows.

Where I disagree with you is here:

Why would a character’s (or a person’s for that matter) ethics vary from category to category? Admittedly, I come to this question as a Buddhist: I follow the Noble Eightfold Path, and, e.g., right attention is required in all situations–whether general or sexual. Individual manifestations of right attention may differ, but the ethic is constant. In my own life, this is why I tell people that as the pandemic recedes (we hope), I am not experiencing a new normal, since for almost four decades my normal has been the Eightfold Path–situations and circumstances change, but the ethic I bring to them is constant.

This was not how I was raised. I was taught that in business (for example) rules might be bent/changed, and actions permitted that in other areas would not be allowed. That was a world of “Thou Shall” and “Thou Shall Not,” with the caveat that in some cases a “Shall Not” can become a “Shall” (just war theory for example). This was a world where intrinsic natures and instincts were allowed to take over, e.g., “Well, that’s just how men are” or “That’s just the way things are.” [A much longer conversation is how such thinking emerged when Aristotle’s notion of telos was incorporated into Christian thought]

It was a world where a person possessed a general ethic, which could be modified situationally, sometimes to the point where it was contravened (though it seemed that while the general ethic was binding on all, the situational ethic was sui generis to the moment and–especially–the person).

Does this sound like something MrKiddWInt has thought and read about a lot? LOL. Aesthetics and ethics have been the two main occupations of my career as a writer and essayist.

A vulgar way to present the difference as I currently understand it would be to say that in Buddhism, the ethical imperative is to act always with compassion, i.e., manifesting compassion is the guiding ethic. In Western Abrahamic ethics–a rules-based system (with the rules set/propounded by a higher authority, sometimes of supernatural/transcendent origin)–the rules can be modified/suspended depending on circumstances. Societal rifts/friction occur when the modifications are not universally agreed upon:

Rule: marriage is between one man and one woman.

Historically, both of these rules were justified by appeals to human nature: a human being’s telos is to reproduce, so same-sex desires and behaviors are intrinsically disordered, and should be prohibited. Does that cause suffering for queers? Sure, but ethics are ethics. Rules need to be obeyed in order for there not to be chaos.

Back to Bond: what are proper sexual ethics between men and women? Are women created/designed to be submissive to men’s desires? Is sexual aggression a natural/innate characteristic of men’s natures? If yes, then women submitting/acquiescing to Bond in a film is merely a correct narrative representation of human nature–in other words–authentic.

They inevitably fall because it is women’s nature to do so vis-à-vis a man. The inevitability is in-built.

Sorry for the raggedness of this post. But so glad to have the conversation, since I truly believe that we are witnessing in the world today (and, of course, in its art) a battle between two different conceptions of human anthropology.

Systems of belief, systems of philosophy offer us a way to view the world and find our place in it. Human nature needs these to observe, comprehend and lead our own lives. Thus, we find such in every human civilisation. And where they are absent or lacking because they no longer serve their purpose the human mind seeks to alter its system of values and coordinates as required.

Away from the general orientation we seek, usually along the lines of good/bad, there is the fact that real live comes in heavily compartmentalised doses. Life happens in concrete situations, indeed constantly changing as you pointed out. Our roles, our moods change. Ethics as an absolute set of ideals seems to offer stability. Life in the concrete moment though is often anything but stable.

Sexuality is a field where a lot of it happens in the mind, the one place where the mind can and does free itself from its own inhibition. Where ethics isn’t the first and last and far from an absolute quality. To the contrary, the motif of ‘slipping from god’s (society’s) observant eye’ and behave ‘bad’ is a powerful fetish for many and resonates throughout pop culture in countless forms and disguises.

That’s why I think for the requirements of a work of fiction it’s possible - necessary? - to differentiate the ethics along categories and situations. It’s where conflict is rooted, where characters are questioned. Bond killing for the purpose of a greater picture is already a good example. Bond as the holy Saint George dragonslayer, but behaving ordinarily, questionably even, that’s the source of his appeal. He’s allowed to do what we’re not.

To clear up my point: just as Bond should really have to work to conquer his nemesis he should have to be challenged by the female protagonist he romances. Anything else would make it too easy and therefore uninvolving.

But his ethics are always pragmatic: to achieve his goals he will use his wits, his weapons and his physical prowess, always (we assume) for the greater good.

As for his sexual ethics: he is not a nice guy who questions bedding traumatized women in order to turn them against their villainous captors. He is ready to even sacrifice them. Should that behavior change now?

I don’t think so since it would change Bond‘s character. Yes, he can be the knight in shining armour, and he probably sees himself as one if it’s possible. But he has an objective which obligates him to be ruthless with everyone. Still, we see him suffer for this, and that’s what separates him from the dumb brutes.

Not necessarily in the right thread - but maybe it is: 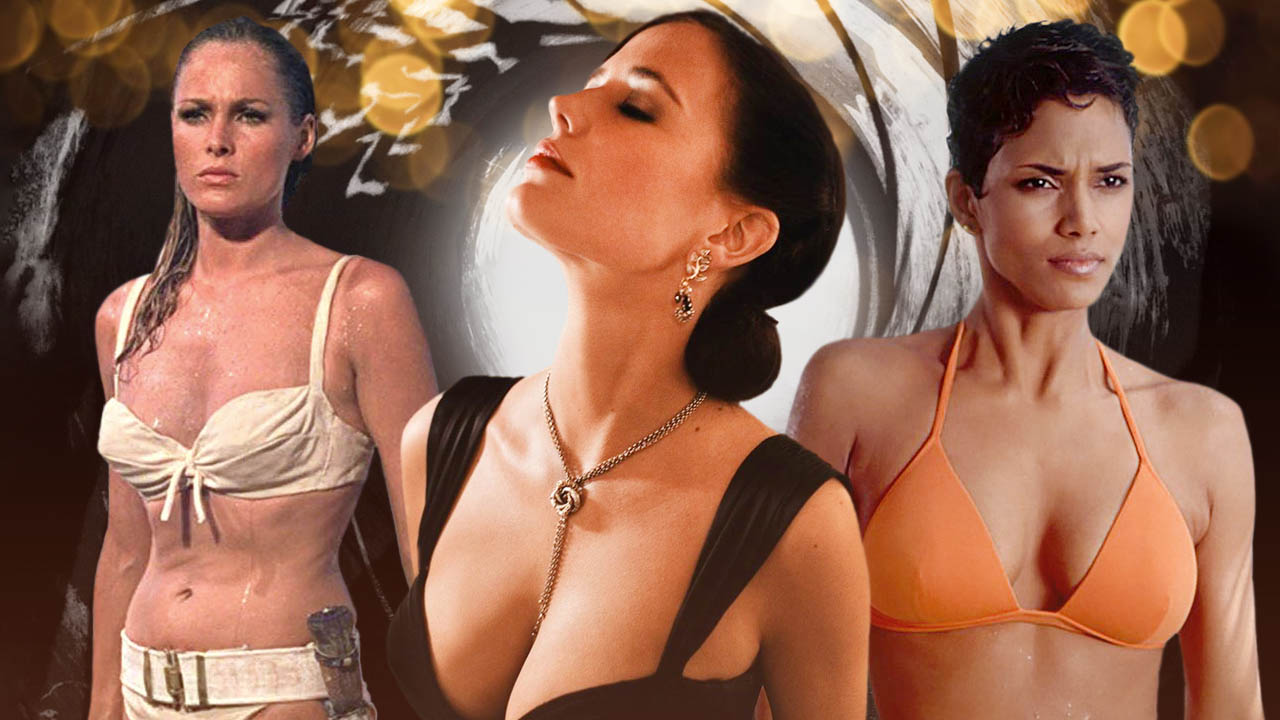 We countdown the best Bond girls in the latest James Bond revisited - Bond Girls Ranked - everyone from Eva Green to Ursula Andress!

Not so much a touch on the ‘sexual ethics’ part of this topic, but more feminist film theory - which I guess goes hand in hand.

Generally speaking often a female character has no real importance herself, it is how she makes the male feel or act that is important. The female only exists in relation to the male, and this could not be more true of the Bond franchise.

Despite our female characters gradually becoming more dominant and a match for Bond we still cannot escape that the female character, more often than not, has been ‘coded’ by our beloved franchise. An example, Jinx in Die Another Day. Ultimately she held the same position as Bond, she was strong, worked in a male dominated environment, could look after herself etc. But our first introduction of her was from a masculine voyeuristic position - bikini and binoculars

I don’t think much will ever change between Bond and his female counterparts because the essence of the films are built around a male gaze. Which, in turn, will always place the female in a subservient role.

If it wasn’t this way, I don’t think I would enjoy it as much - ha!

I do think that is really at forefront of
BB’s mind - no doubt why Craig is often shirtless. Lea Seydoux and PWB were talking about this very topic during (I think) the first PR push for No Time To Die.