The World is not Enough is not a favourite Bond film. I am sure it commenced its life from inception to finished product with the very best of artistic intentions. After all, we heard during production that, unlike its predecessor, Tomorrow Never Dies, this production was calm and untroubled. We heard that there was a script in complete and locked down readiness. We heard that a director had been chosen for his ability to direct Women(!?). Pierce Brosnan seemed genuine with his PR rhetoric as he wrapped his faux enthusiasm around the words, ‘This is all about one man and his gun.’

In reality, I think the ‘calm set’ inspired sleepiness and if Michael Apted Could direct women, of which one subject was after all Denise Richards, an actress of renowned dramatic integrity, requiring only the very best of artistic guidance and inspiration, his direction of the rest of the action film’s requirements fell thudishly. It was a boring film, a sin for any film but cardinal for an action film.

In other conversation I have laid the blame for this thinking and hiring directly at the Producers’ feet, who themselves at this time were finding theirs in their ongoing self-education in a role to which they had been promoted after Cubby Broccoli had passed on.

In commencing the process, it is as if the Producers asked the Marketers to produce a complete list of every demographic known to marketing. And thence to craft a script that would in parts, have an opportunity to appeal to every single one; Drama, Action, Buffoonery, Romance, Comedy, but that which in the end and to my mind, appealed to no one in entirety.

Time has demonstrated that the Producers have veritably found their way but The World is not Enough is still out there as a testament to others when experiencing and correcting over time, one’s own errors of judgement.

An annual holiday with some friends that in times past had led us to Madrid, Valencia and Nice, this time took us to Bilbao. And it was perhaps with an errant sense of completism, or misguided dedication that I thought to document and write. After all, the above introduction does likely not fill you with anticipation as to a writer’s enjoyment, and to be sure, what follows will follow this theme.

Bilbao’s Port and mining endeavours notwithstanding, it was in the late 1980’s that Bilbao became a big noise in banking but it was in 1997 when the Frank Gehry designed Guggenheim Museum was built and opened that Bilbao was deemed worthy of touristic attention. Sitting adjacent to the winding Nervion River, it cuts a dashing figure and if Bilbao had been known to the Producers and Director as a banking community of note, and should thus be a banking location to consider for Brosnan’s third film, the Guggenheim museum must surely have tipped the balance in Bilbao’s favour.

So, how was it used and how did it feature in the film? In a word, Badly.

The film opens with a glossy gun barrel and cuts to a bespectacled Bond running across Henao Kalea, evidently in a hurry as his anxious face informs us after which, and for no apparent reason, there follows a whip pan away from Bond to show us the Guggenheim and Puppy, the flower dog, sitting hemmed in at the end of a rather drab looking street called Iparraguirre Kalea. Why? I asked myself Why in the cinema for my first viewing and every time I see this shot in later viewings, I ask again. Why? 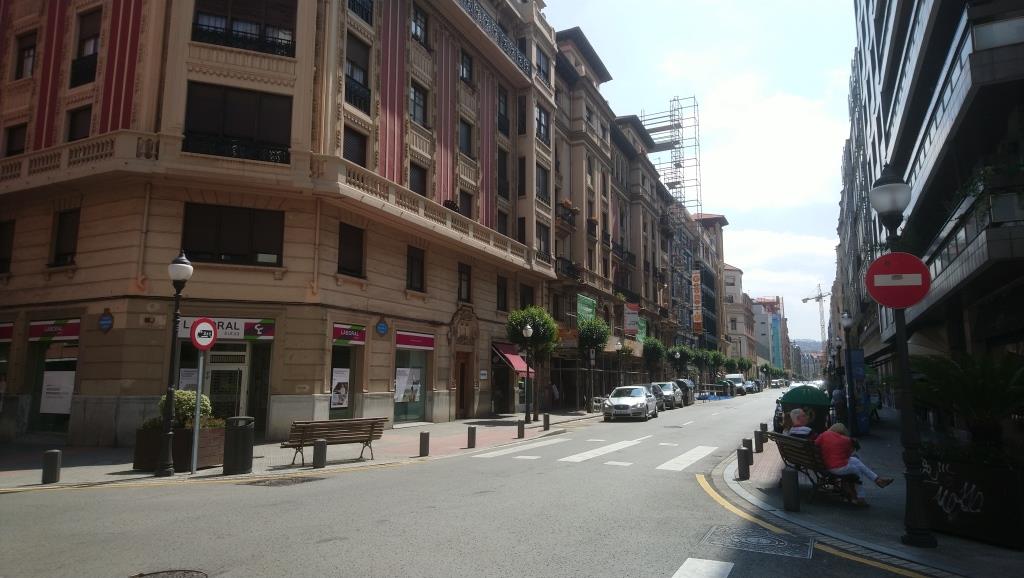 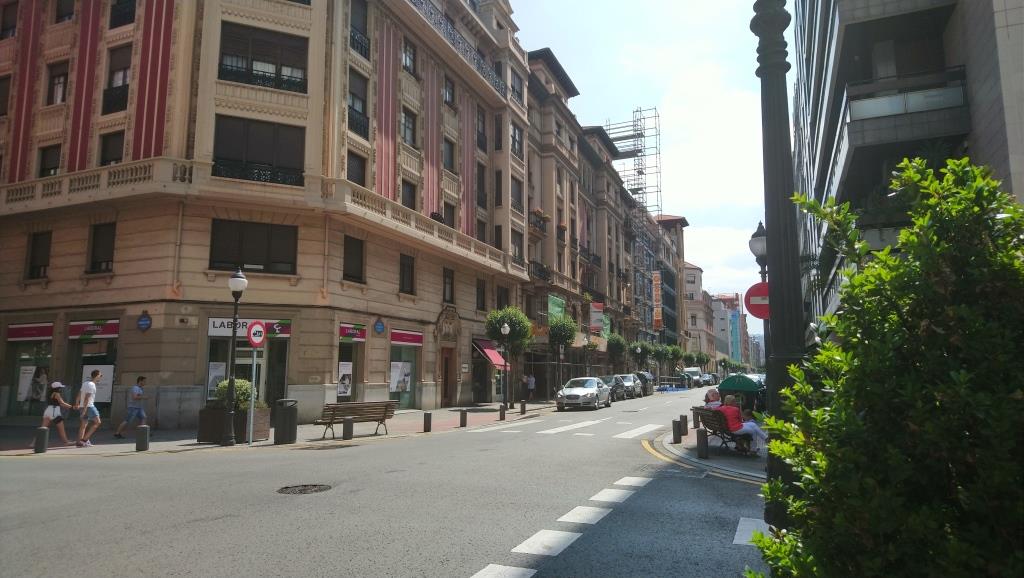 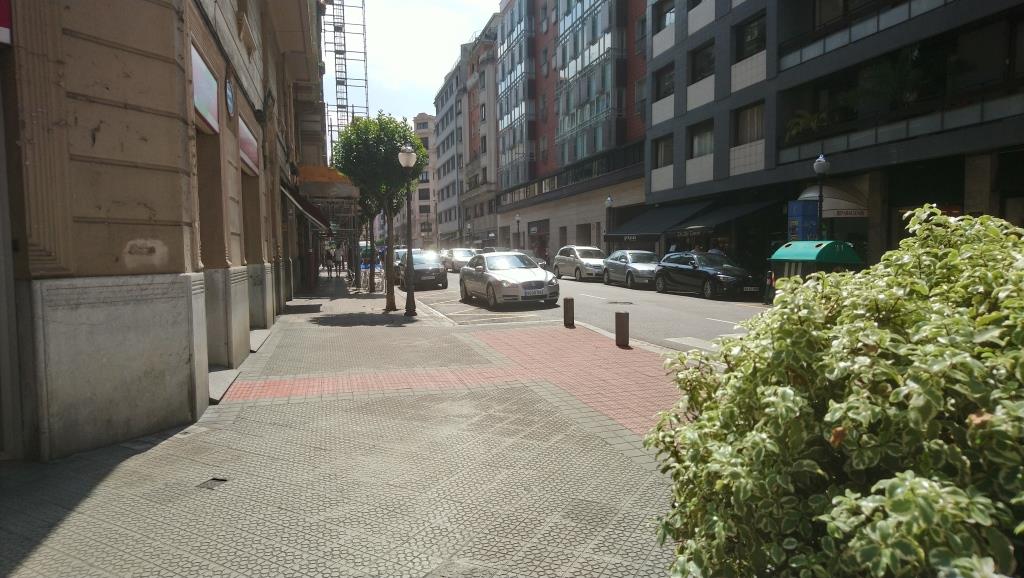 Was this really the most exciting introduction to a Bond film or for that matter, the glossy magnitude of the Guggenheim? Such was the urgency of the whip pan, in my mind it was suggesting the building’s later and heightened involvement in the film. Even with but four days to consider Bilbao, I mused that, from the gun barrel introduction, a nice tracking shot from a helicopter, banking along the curves of the Nervion River to hone in on the splendour of the curves of the Guggenheim and thence, to alight on a hurried Bond would have allowed context and beauty and cinematic verve. 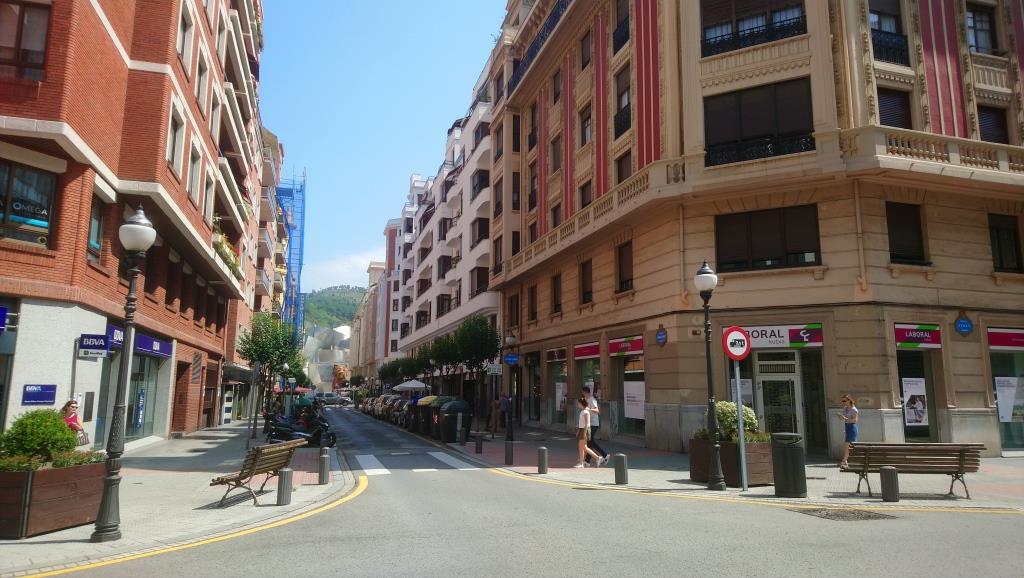 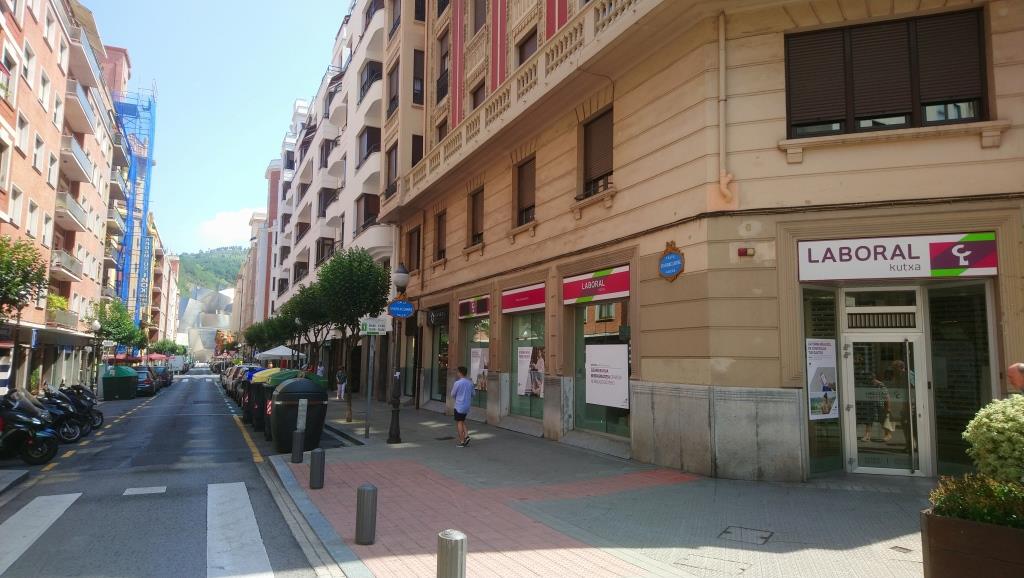 The film then finds itself in the offices of some Swiss bankers to afford some verbiage, by play, and some of Brosnan’s famed gurning when faced with discomfort. The offices sit in a building between Lersundi Kalea and Mazareddo Zumarkalea. A triangular building when viewed from above, and designed by Aj3 Architects, the narrowest point to the west holds the tower with the balconied windows.

I managed to slip in the building when someone else was slipping out, but having reviewed all the floors, I could not see how one traversed from the entrance at 63 Mazareddo Zumarkalea to the far west, towered part of the construction. The occupancy also seemed to be randomly part residential and part business judging from person’s names and business names outside the doors. Having eventually introduced myself to a helpful looking lady as she was leaving her apartment, and who seemed not at all put out by a stranger in her building, she indicated that the apartment in question was either empty or vacated. Either way, I did not gain access to the room in question. 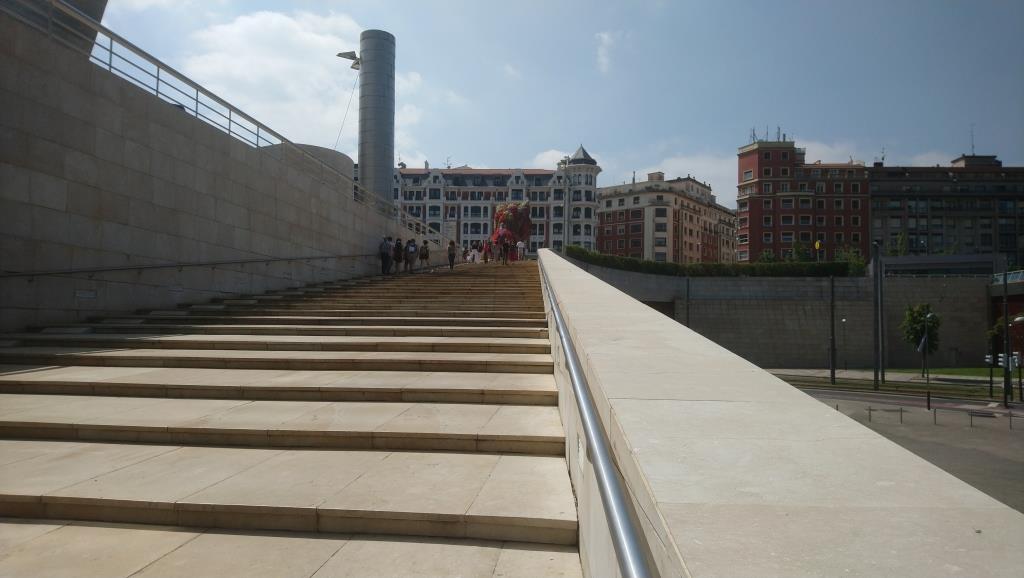 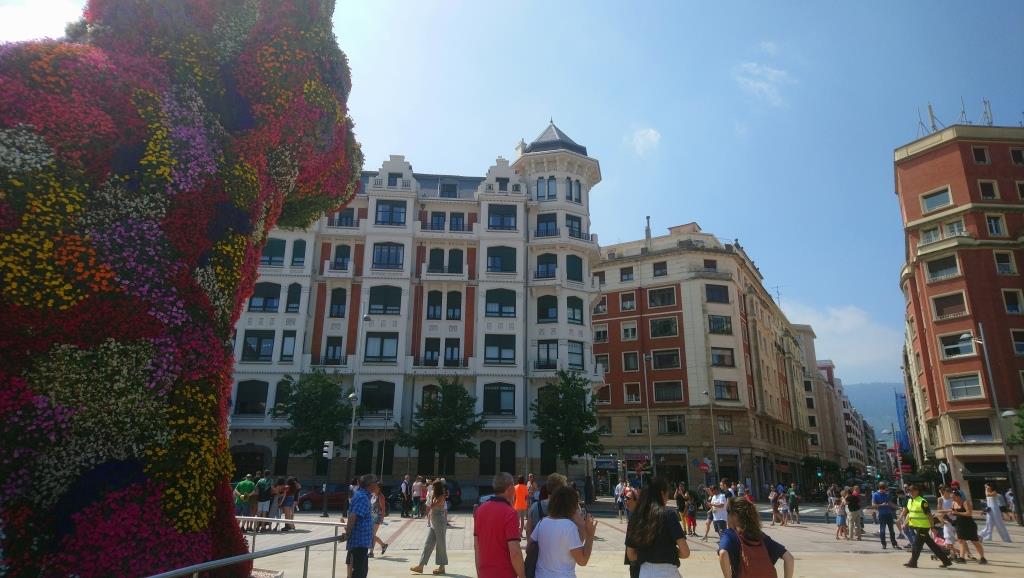 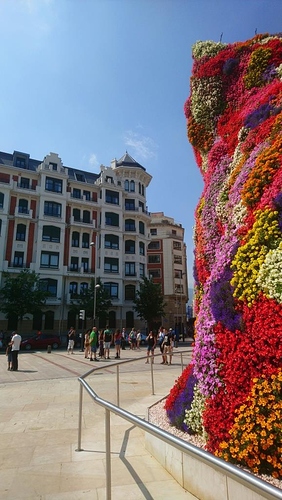 Bond chucks himself out of the window and, having fallen short of the pavement, a couple of spirited yanks makes the leg of an aged antique oaken table fall apart and he lands safely at the foot of Jeff Koons’ Puppy to the admiring glances of a couple of shoppers. A second bout of uncomfortable gurning ensues for the benefits of both shoppers and audience after which, he makes his way across the Salbeko Zubia bridge while looking inappropriately shifty, nervous and, to be quite frank, not anything like a Bond in absolute and smooth control. 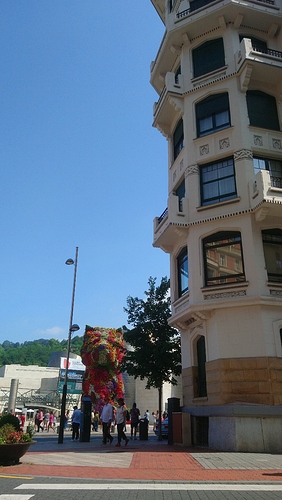 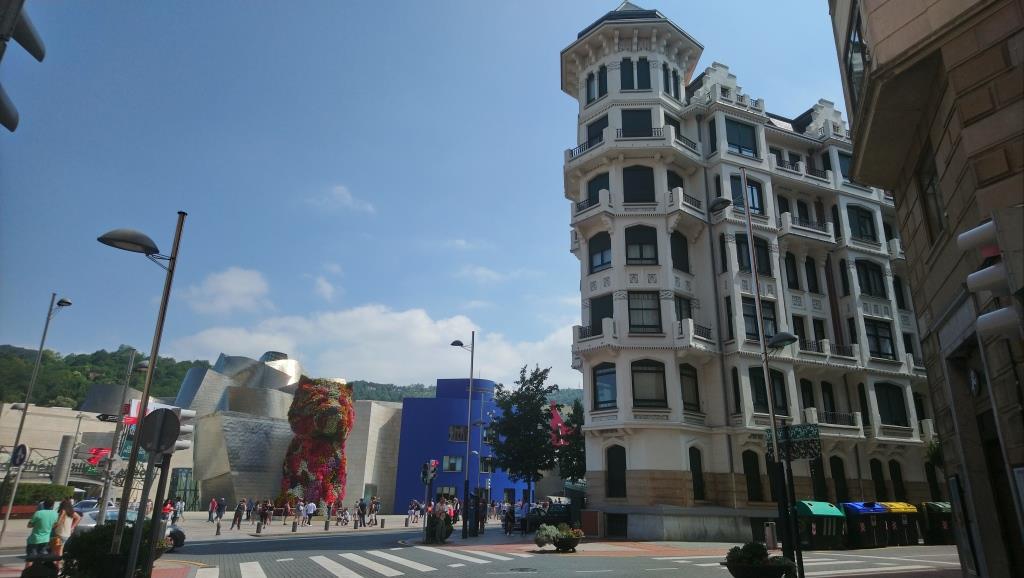 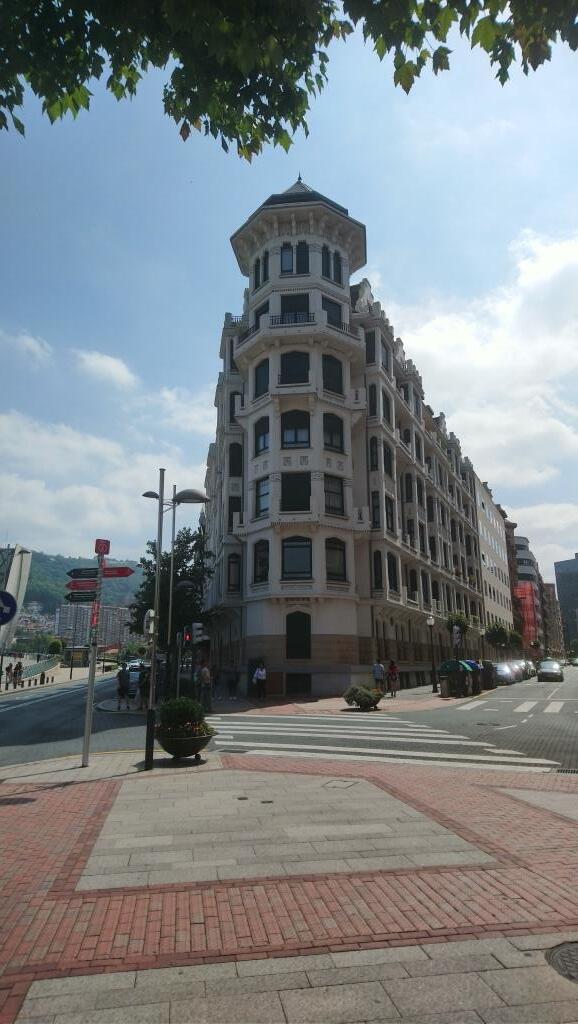 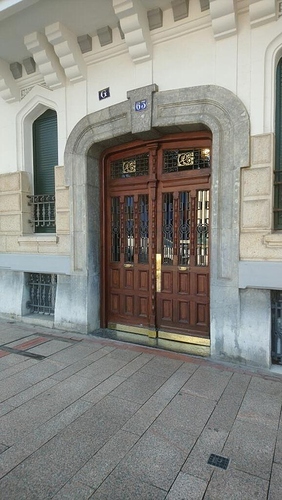 It was no wonder after seeing the film in an unfinished state, that test audiences felt short changed with this as a pre credits sequence. In vain attempts to liven things up before the title song and the credits, it was suggested to hitch the overly long London based boat chase to the Bilbao sequence. To my mind, this just compounded the lack of vision but it did successfully foreshadow the entire film’s shortcomings. 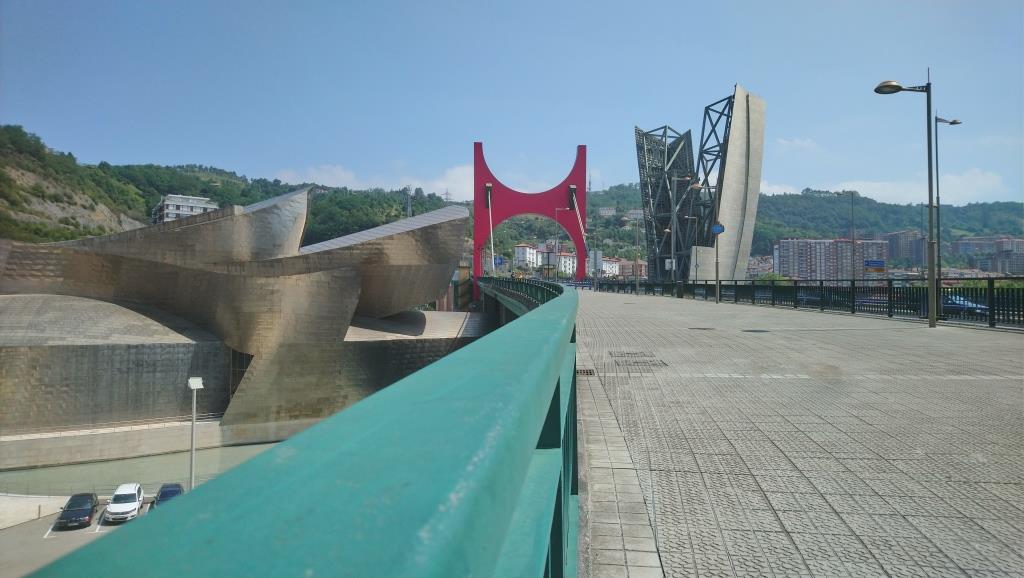 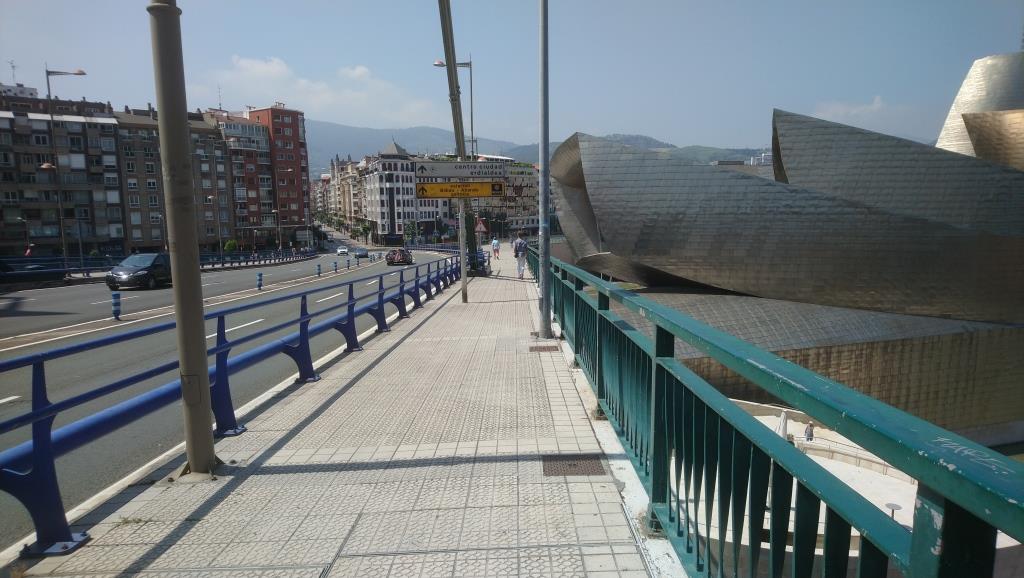 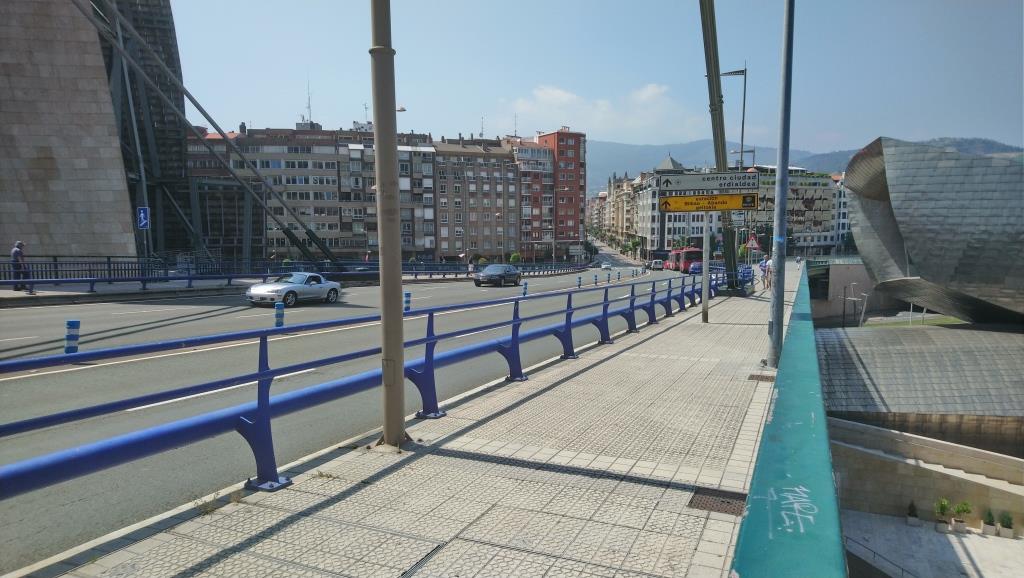 All of which is to say, if one can forget the film, Bilbao does make for a splendid four-day stop. Also taking in a day trip to San Sebastien, the Basque pintxos, or tapas, are quite something. Every café bar has its bar overloaded with an array of brightly coloured, individually made, succulent bite sized morsels to accompany your wine. Labour intensive to the nth degree, never has food looked so appetising as in Bilbao’s old and new districts. As a modus operandi, I would favour eschewing restaurant fare to concentrate on light snacking and drinking through your Bilbao days.

The streets are wide and empty of the excitable traffic to be found in Madrid. The public transport works a charm; one is even treated to Metro entrances designed by Norman Foster to curiously shrimp shell effect.

I would also recommend heading west to the estuary mouth to take in the beaches and the Vizcaya Bridge, a transporter bridge of late 19 century origins.

But I would not recommend further ‘for pleasure’ viewings of The World is not Enough unless it is purely for research purposes. A film full of jarringly opposing themes as John Cleese traps the base of his coat in the car and looks skywards for inspiration as to what could have trapped it, versus a scene where Brosnan touches a computer screen over a tear shed by Marceau, versus a drab ski chase scene where in their wisdom to assure themselves of speedy transport, the baddies chose something with a knife blade, drag-efficient parachute, versus, versus, versus…

I love Bilbao. I went several times whilst I was living in Spain. It is a beautiful and vibrant city that was totally wasted in TWINE. Imagine having a scene in Tokyo and spending the entire time inside a building…like in Spectre.

Imagine having a scene in Tokyo and spending the entire time inside a building…like in Spectre.

Just for the sake of the gif…

One of the Nine Eyes conferences is in Tokyo.

One of the Nine Eyes conferences is in Tokyo.

You know, I’m not sure I even realised that!

Ooh! I just quoted a whole post! Take that, System!

A fellow member from the German Fan Club managed to get inside the office and on the balcony in 2016. At that time, there was some tourism office located there. Required lots of emailing, phone calls and even writing letters in advance. It’s on the 6th floor (which for some reason is labelled as 4th floor). We had a detailed report on the visit in issue #003 (Jan. 2017) of ‘gunbarrel’, the German Fan Club magazine. The office shown in the movie actually was rebuilt in Pinewood, as the original one is much smaller.

Clearly I didn’t do an ‘up to snuff’ job. Would love to see.

Some shots of the office itself: 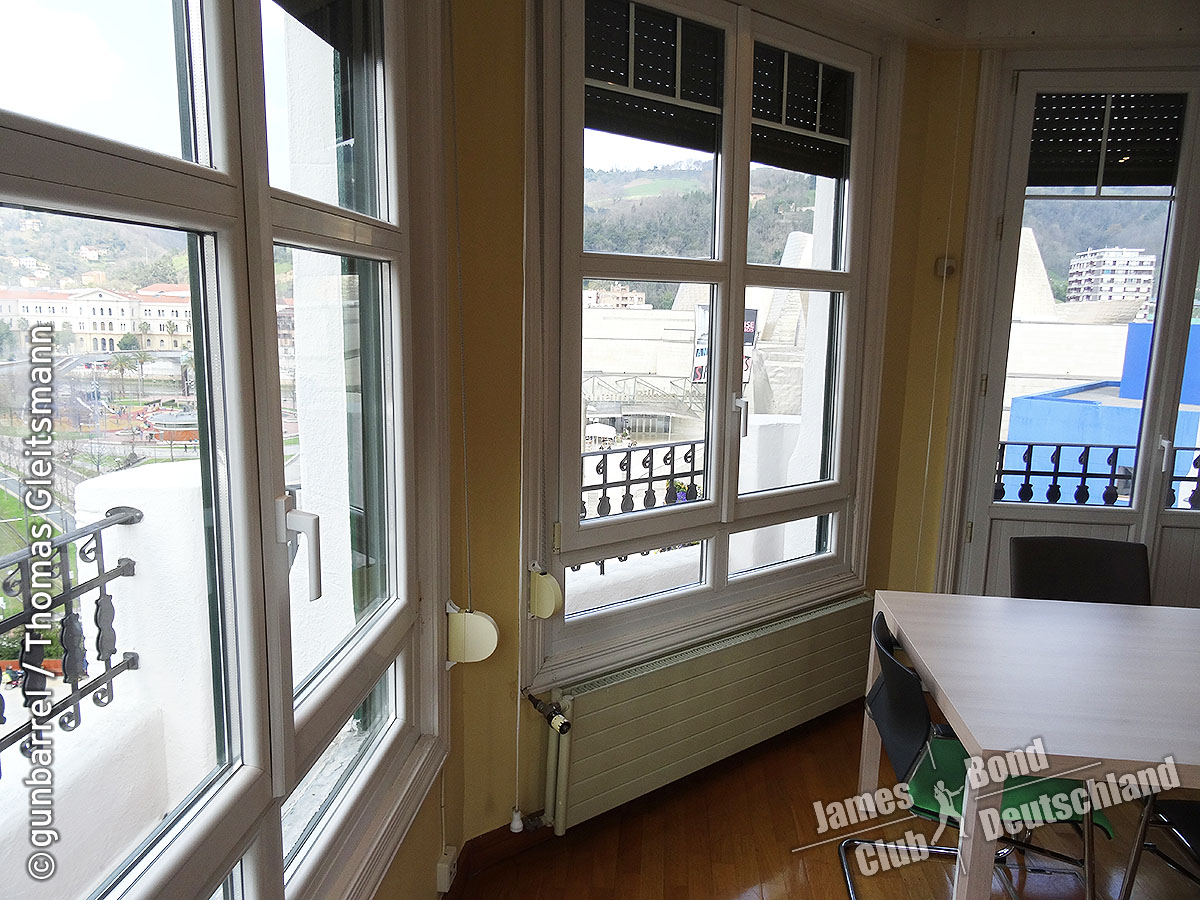 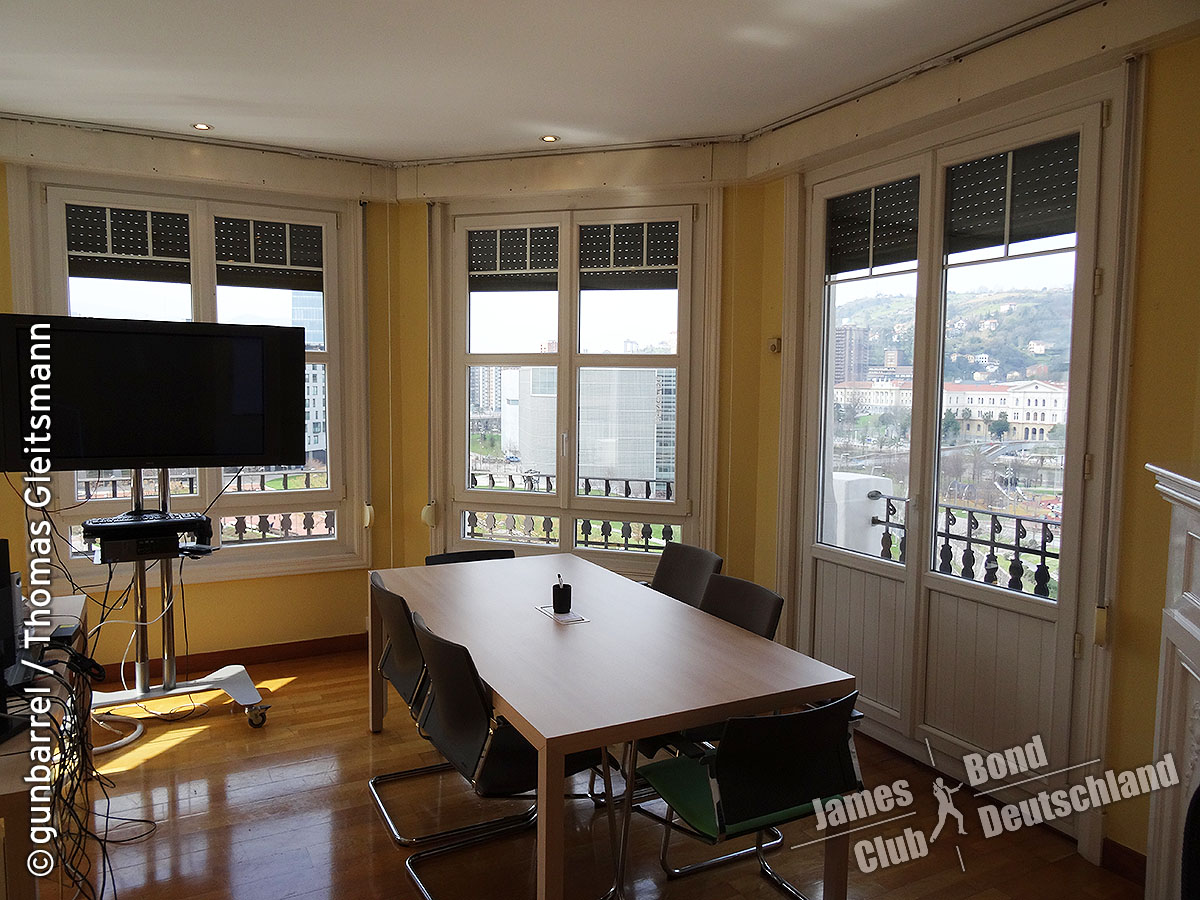 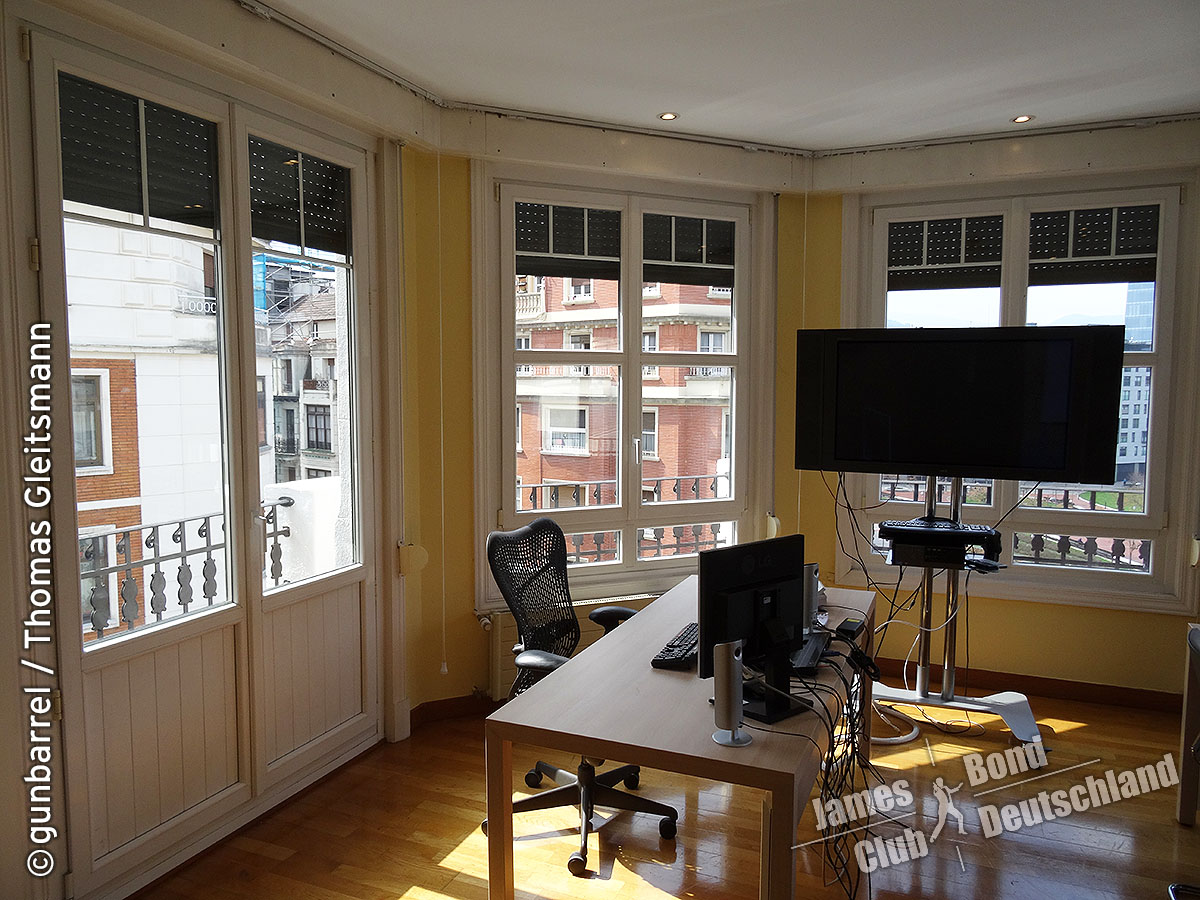 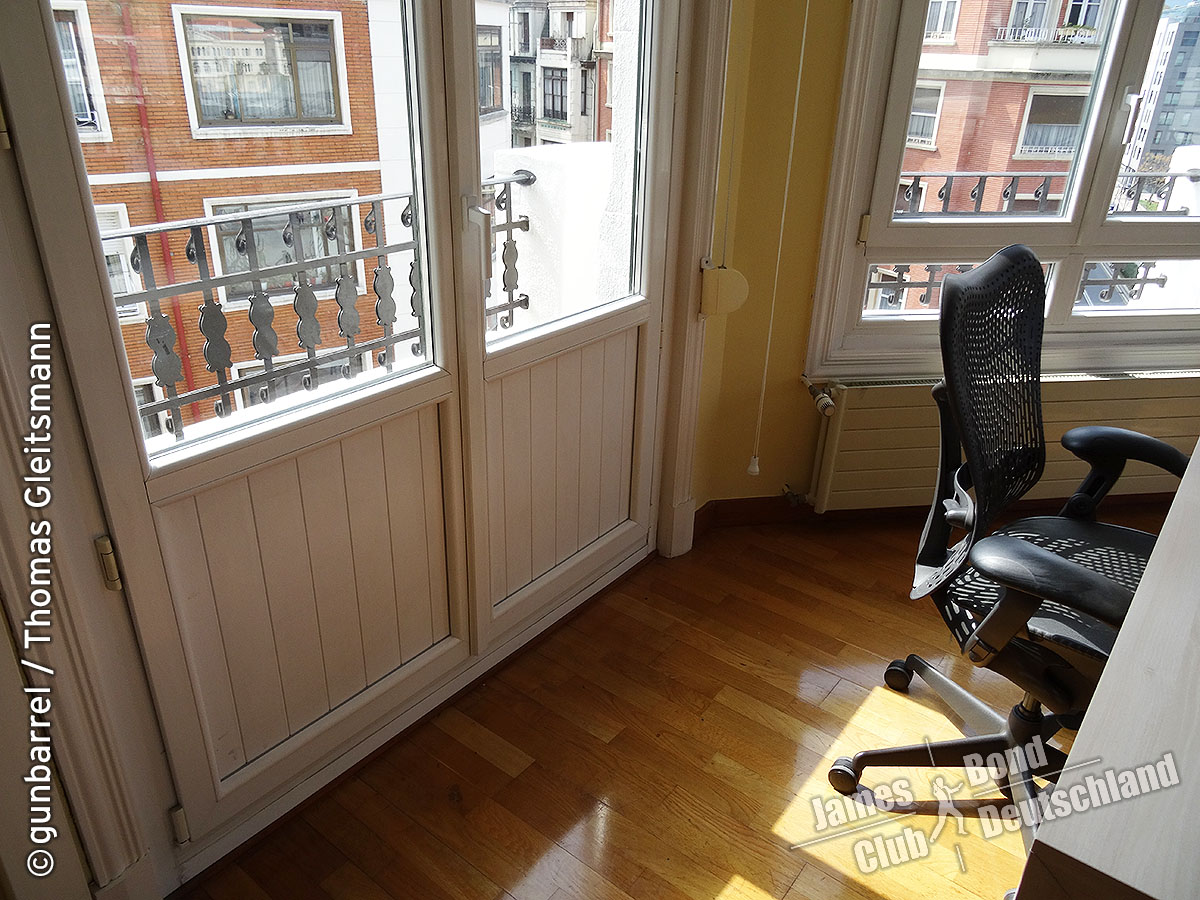 Views from the balcony: 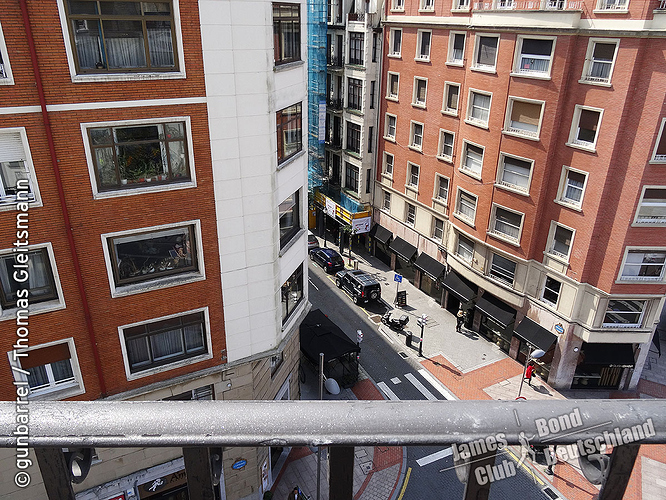 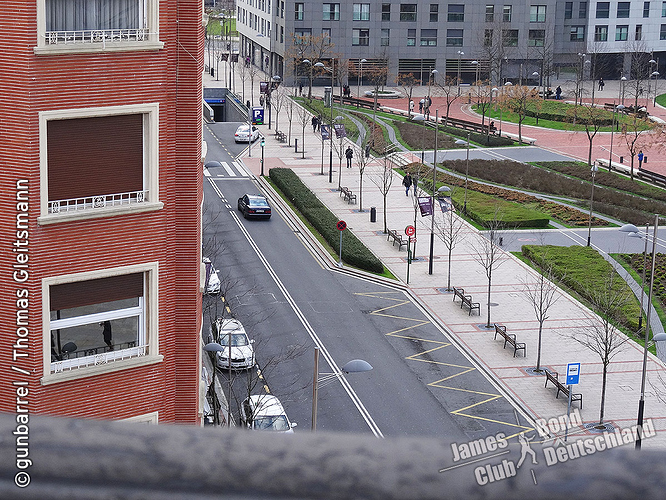 This staircase window can also be spotted when Brosnan lokks out of the office door: 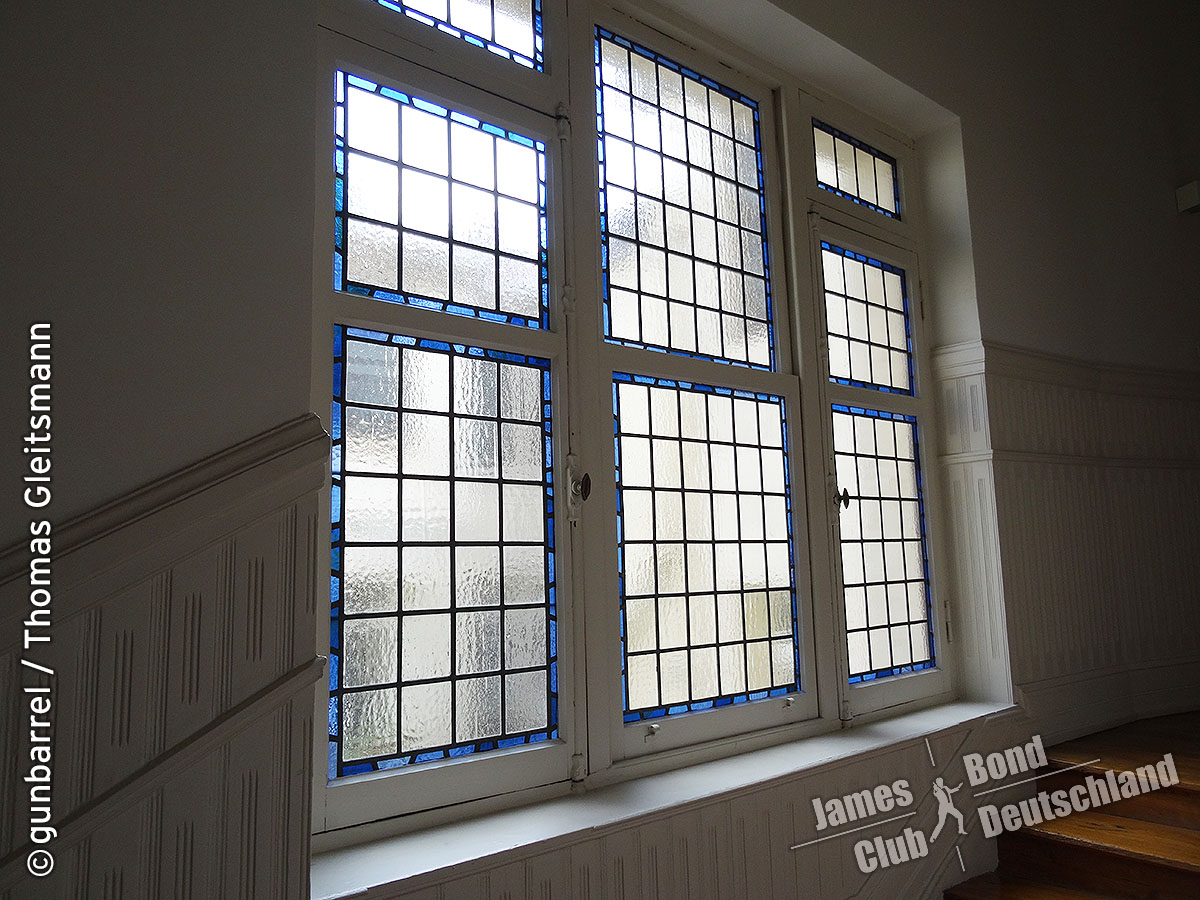 With special thanks to Thomas Gleitsmann. He’s the club’s location tracking expert. A meticulous researcher who’s always willing to go the extra mile where other’s think they already did so

Ah yes. I saw the staircase and hallway window…

The other images are incredible.

Thanks for adding sir.