Don’t know if anyone here is familiar with the “Secret Agent Man” print from MAD caricaturist Tom Richmond. He offered it in a limited run about 10 years ago.

Anyway, he’s updated it now, renamed it “Shaken, Not Stirred” and tossed in Barry Nelson and David Niven so it now features all 8 actors who’ve played Bond on screen to date (and all 3 who were some version of “Casino Royale”). Thought I’m mention it in case anyone’s interested. You can find it here: https://www.tomrichmond.com/product/shaken-not-stirred-limited-edition-print/ 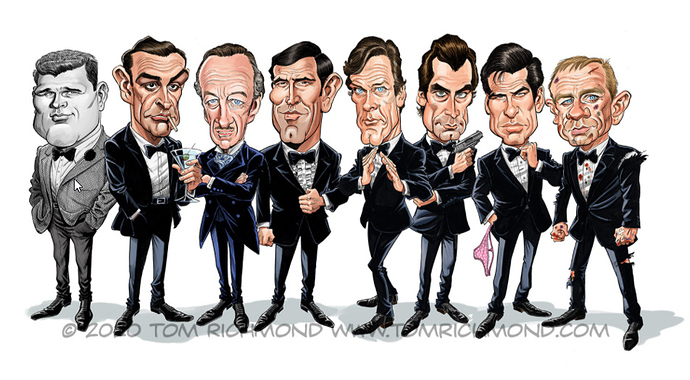 His Niven is perfect!

Was Moore’s Bond such a chop socky fella?

Never would have thought that to be the pose to be caricatured.

Roger perfected the “judo chop,” that magical, Kirk-Fu-like move that could render a foe unconcious whether delivered to the neck, the upper back, the stenum, I don’t know maybe even the kneecap. I think that’s what Tom’s going for as opposed to any “Bruce Lee” vibe. In fact, I always assumed Austin Power’s habit of using this magical move – while actually yelling “Judo CHOP!” – was intended as a nod to Roger’s “fighting” style. The equally lethal “loafer kick” was probably too hard to juggle. LOL

Bear in mind I say all that as a guy whose favorite Bond is Moore. And when you’ve already got one guy with the martini and another with the gun, you need to start getting more creative. If anyone was going to get a weapon, it needed to be Tim. I don’t know that I see Pierce as a bigger “womanizer” than Roger, but hey. I definitely love the fact that Craig looks like he’s been through a blender.

In the earlier print, Tom had Roger reversed, with his hair part and cheek mole on the wrong side, as he later realized. This one corrects that and features a much better image of Laz in particular. Tim, Pierce and Daniel seem unchanged from the first go-round.

It was Lazenby’s only flaw! He was being told to be Connery. The other successors knew, and had directors and producers who knew, mimicking was not the way to go.

I am very proud to have this piece personally signed to me by the artist. Need to get it properly framed. There’s also the Post It note that reads: “Bryce, from what I’ve been told of you, you’re doing it right.”