Inspired by the recent screening of “Casino Royale”, on an impulse, I visited Karlovy Vary last weekend.
The very possibility of being in places so well known from the movie is already fascinating in its own way. In this particular case, however, satisfaction is all the more so because, first of all: despite the thirteen years since its premiere, the places that have served the creators of “Casino Royale” look almost exactly the same as during the screening. And secondly: the interiors of the buildings were also used - which, despite everything, was a surprise to me.
And so the title casino is actually the Emperor’s Spa “Lazne I”. In the film we can see not only the magnificent facade of the building, but also partly its interesting interior. “Splendide Hotel”, where Bond and Vesper stays, is actually the neo-Gothic Grandhotel Pupp (lobby looks familiar anyway), while the dinner they both enjoy after the winning tournament was filmed at the hotel restaurant, the extremely stylish Grandrestaurant Pupp, which today also is decorated almost identically. The characteristic guard booth at the parking lot in front of the hotel will not escape the attention of film fans.
And I definitely recommend Karlovy Vary as a great escape from everyday life; a place with an unusual, undeniable charm. 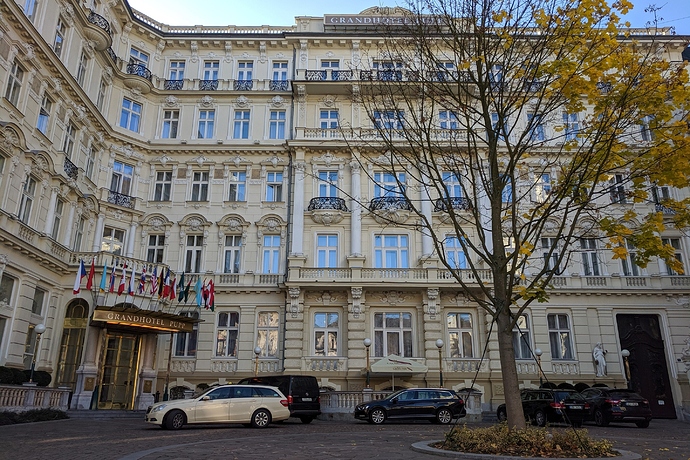 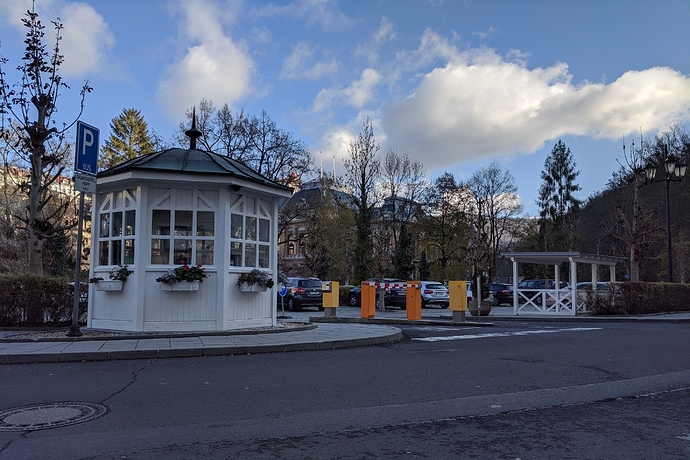 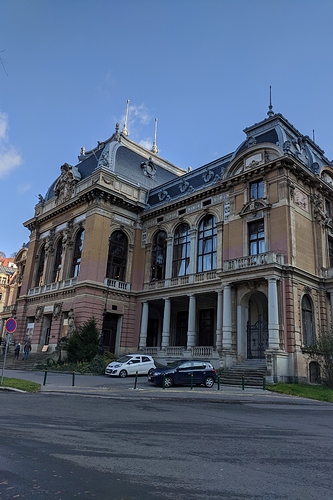 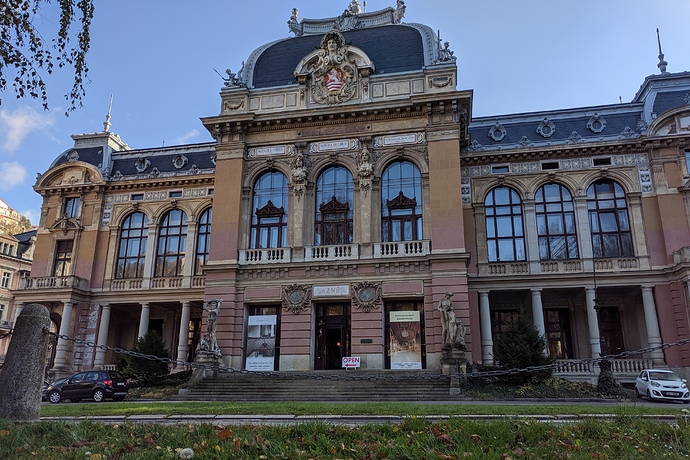 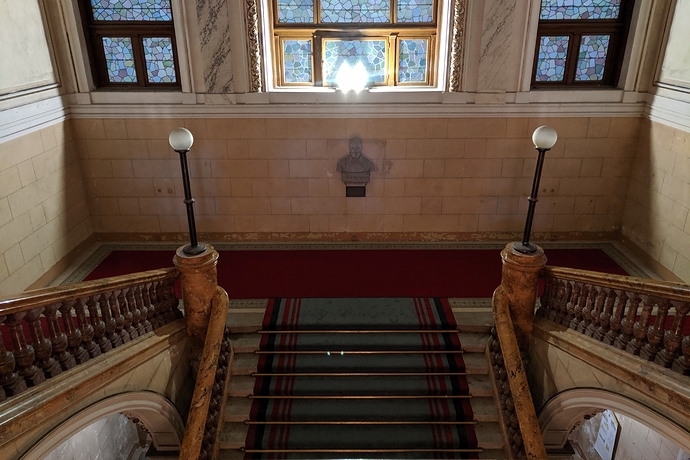 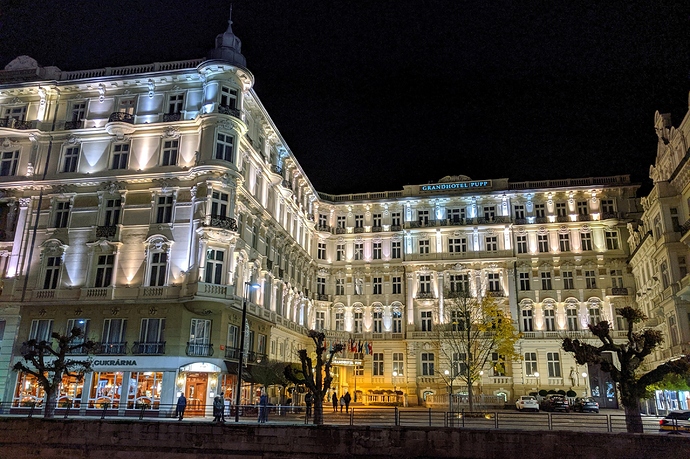 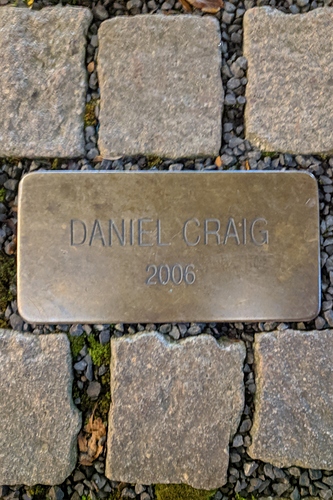 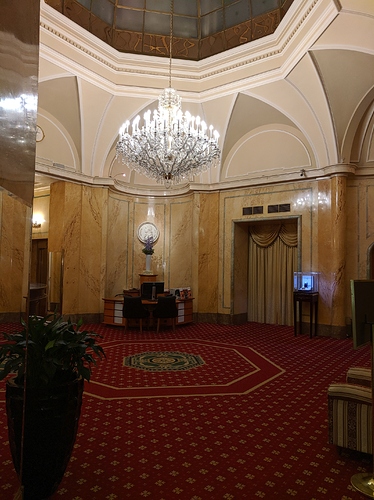 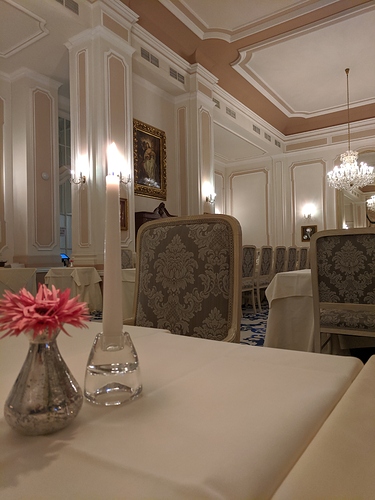 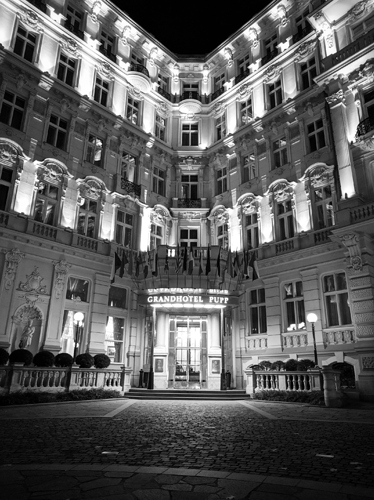 Very nice! I just got back from my own visit in mid-September. It’s quite a nice little town! It is pretty wild standing in front of these places in real life, and then rewatching the film when you get home with a very real geographical baring on it all. Glad you had a good trip!

Great pictures. It’s a really beautiful city. I was there at the time of shooting, but only for half a day (took a detour when visiting friends in eastern Germany), so I didn’t see any shooting action. The area around the casino and the hotel had a complete set decoration, even places you never saw in the movie. The funniest thing was that they even had advertising posters for the casino. 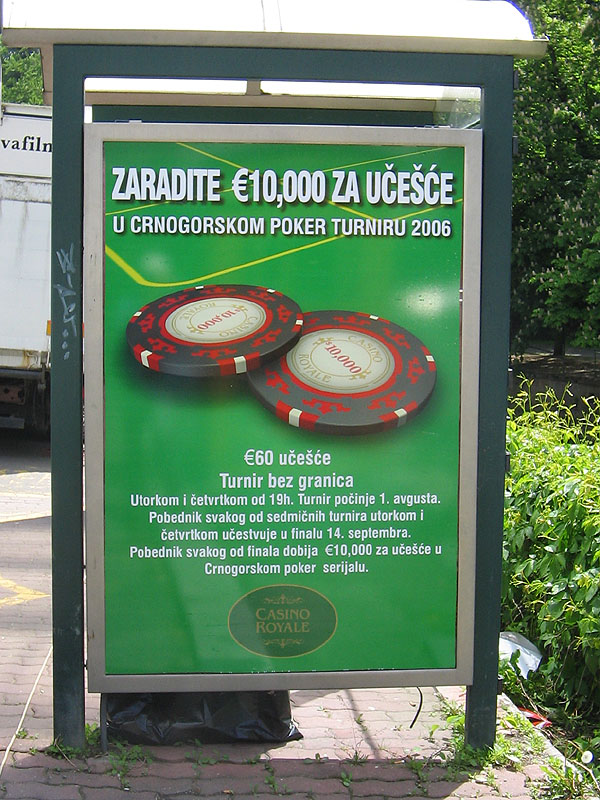 Despite being decorated, the hotel cafe was open to the public and I remember sitting outside with a cup of tea, writing postcards (people still did that at the time) to the entire CBn team. 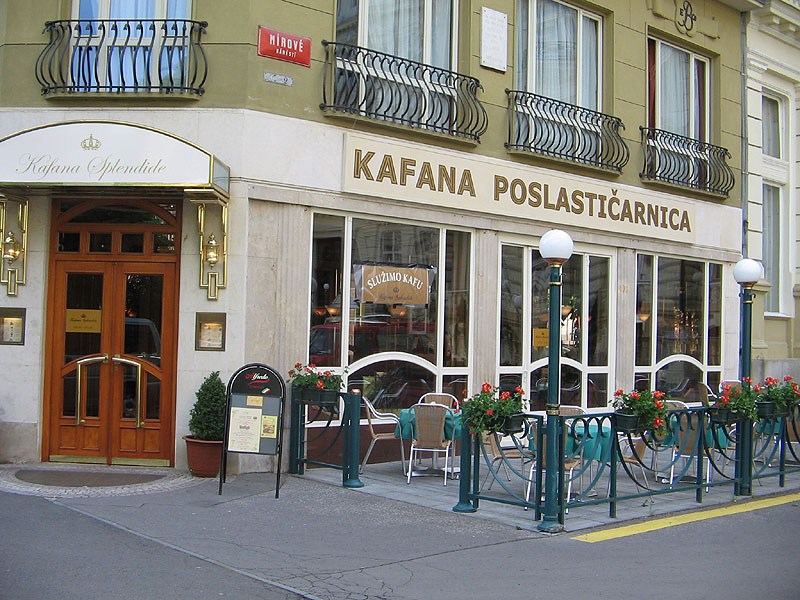 But the most fascinating thing was standing in front of a building that was decorated as “Casino Royale”, knowing that this was really going to be the place. 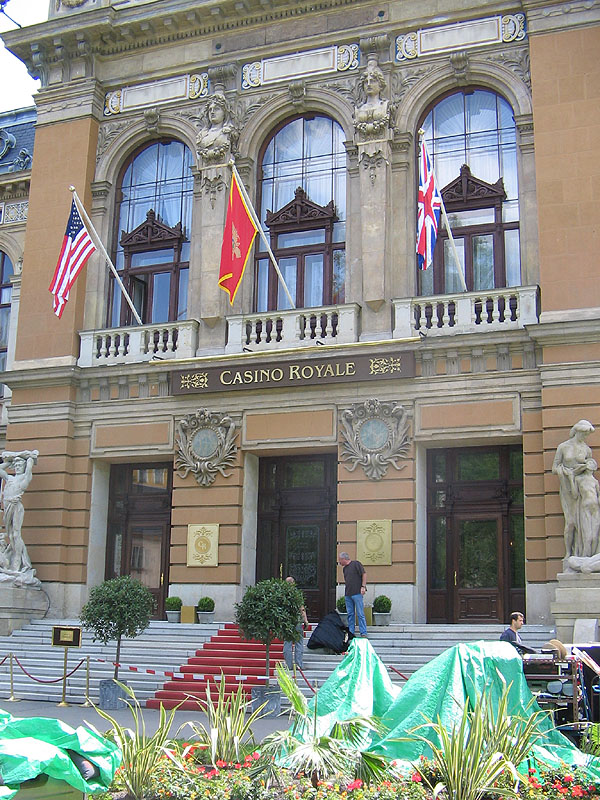 Thank you. Great pictures as well, @stromberg! It must’ve been fascinating knowing that the cast and crew are there. I wonder if the poster is visible in the movie

) sometime soon. I suppose it’s gonna be quite a different experience from now on.
Anyway, from my little experience, following Bond tracks really makes traveling easier. Siena and Lake Garda are marked. Time to think of next adventure

Brill photos and glad you had a good time. I’ve been wanting to do this myself and have looked into it more than once. Did you go alone? That’s my issue, as much as I want to go there are only certain trips I can do alone, given the money involved, that I know I’ll enjoy regardless of being alone. I saw some of the marble quarry used for the car chase in QoS and the car chase lake in DAD and, having been once in 2016, I’m booked to revisit the Spectre mountaintop location in February. Going to the 007 Elements exhibition before it changes to reflect NTTD.

It must’ve been fascinating knowing that the cast and crew are there. I wonder if the poster is visible in the movie

Would have been even better if’d seen some live action there. But shooting was almost over at the time. A friend of mine was there a few days before that and watched the shooting of what turned out to be the scenes after the poisoning (he wondered why Craig’s face was all wet). The set had been cleared, but as he wore a North Face jacket like most of the crew, no one asked him to leave. When the scene was done, Daniel Craig walked by close to him, and he dared to ask him for a picture. Without hesitating for a second, DC grabbed the guy’s camera and took what years later became known as “a selfie”. Greatest fan picture I’ve ever seen. Unfortunately, I can’t post it here.

Never spotted the poster in the movie. The first one was on the right of the casino, at the end of the bridge, next to a phone booth. The verso was a poster for tourism in Montenegro. 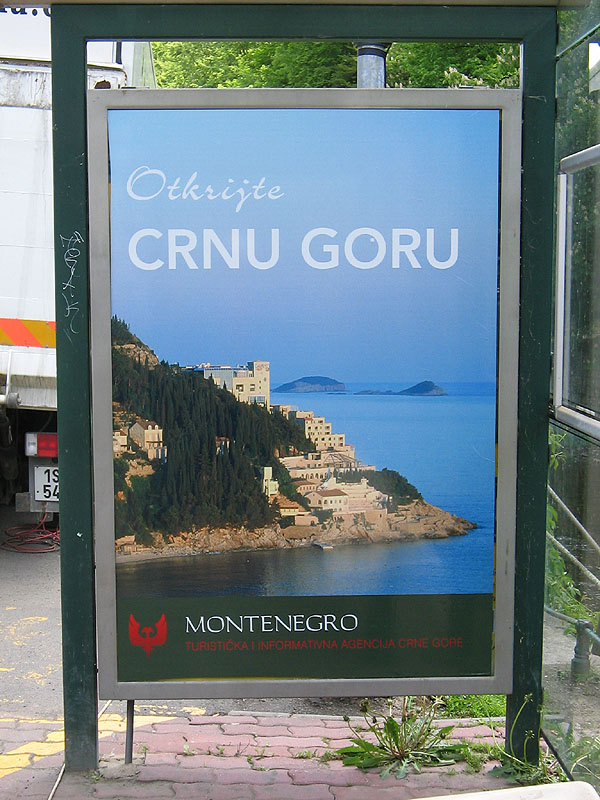 The other one was on a column next to the hotel, outside the window of the dining room. Before you ask, yes I was very much tempted to simply rip it off, but I didn’t dare. 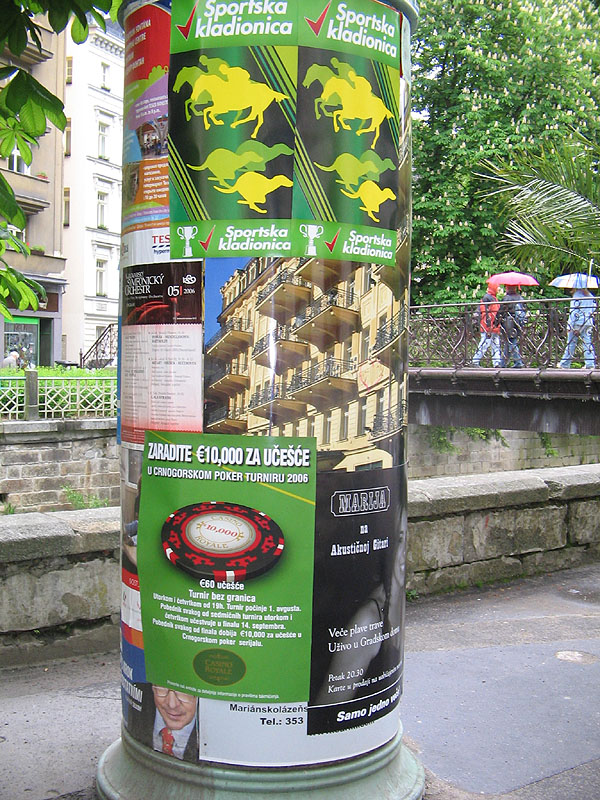 Notice the poster on the right. It’s for a female guitarist “Marija”. When I saw it (not that much was known about the movie at the time), I thought there might be incidental music in the dining scene, with her playing “La Vie en Rose” on the guitar. As we know now, it didn’t happen 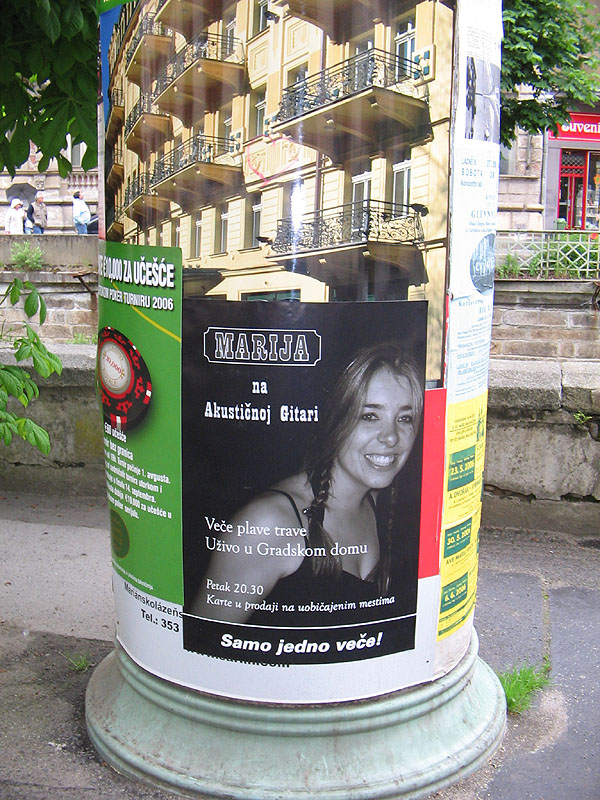 I was there too at the time of shooting - and I was furious that I had just bought a dark blue wind cheater and not the black North Face one of the crew. I had that very jacket almost at the counter before I changed my mind…

However, weather that time was unseasonably chilly for May, with plenty of rain thrown into the mix. I remember it was so cold some nights that you definitely saw your own breath as a cloud. Each time I see CASINO ROYALE I wonder how they avoided Craig and all the others looking like freezing.

It sounds crazy, I went to Karoly Vary especially for the Bond shooting, but I just wasn’t able to stand waiting for hours in the cold night air since I had brought nothing but polo shirts and my new thin jacket. So I usually gave up by ten or half past; often the crew had barely started shooting by then.

But I absolutely recommend Karoly Vary, a fabulous town with a very special flair you don’t find often in the usually overcrowded hotspots of the Instagram set any more.

I remember that picture, wasn’t there an article on the main page back then on the whole thing? I remember another member who was an extra in the casino scenes who made the final cut (he can be seen at one of the tables as Bond is heading to the bar after losing). He kept up a really excellent journal that was frequently published on the main page as well. Good times back then.

I remember him, and I always try and spot him when watching the movie.

Indeed I believe he was. Time flies!

Yes, I did an article on the CBn mainpage about my trip back then. Like many of the old articles, it got mixed up a bit when we had somme tech problems with some backups. Links are broken, images gone. Maybe going to restore it for the 15th anniversary next year…

I remember him, and I always try and spot him when watching the movie.

Had to look it up, you’re right, that was the name (great memory - funnily, I only remembered his real name).
Like the above article, the story’s down in the CBn vault, waiting for a restoration. But I discovered that he also published his story on kindle: 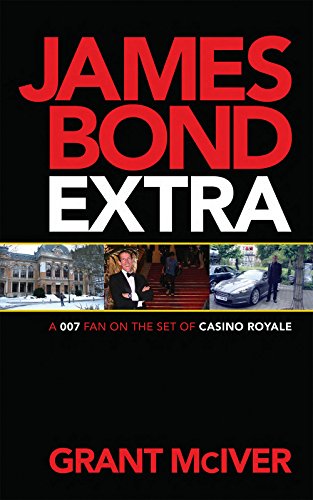 James Bond Extra: A 007 Fan On The Set Of Casino Royale

He can be spotted sitting on a table and laughing after Bond grabbed the knife, shortly before he orders Felix to “get the girl out” (blink and you’ll miss him).

Brill photos and glad you had a good time. I’ve been wanting to do this myself and have looked into it more than once. Did you go alone?

No, I went there with my wife. Fortunately she likes Bond (well, not all of them, but still…), “Casino Royale” especially, so she loved the idea (although in this particular case the trip was a surprise and she learned about where we were going on the road)

But I absolutely recommend Karoly Vary, a fabulous town with a very special flair you don’t find often in the usually overcrowded hotspots of the Instagram set any more.

Absolutely! Karlovy Vary is a very stylish, very elegant town. No wonder why it was picked by location scouting.