I don’t think we’ll see Indy running around much in the next film but we could see him on horseback, or a boat, or behind the wheel of a vehicle. Design the action where he doesn’t have to physically move as much. I think John Wayne in The Shootist is what they should be aiming for with Indy 5 but Ford is in far better shape then Wayne was at the time.

Hopefully he’ll actually shoot people this time. Might be a fun call back to the Cairo swordsman in “Raiders of the Lost Ark.” Indy shot him because he was tired now he shoots them because he’s old.

Funny how time changes how we feel about things. These days I think KOTCS is a fun, harmless movie and largely undeserving of all the hate. I can enjoy it in a 50s B movie kind of way, which was basically the intention anyway. I like how the film allows for the character to have a more complete character arc, seeing him at a different part of his life. Which of course will be expanded upon with Indy 5.

With “Raiders of the Lost Ark” Lucas and Spielberg took a B movie concept and made an A+ film. With “Kingdom of the Crystal Skull” they took a B movie idea and simply made another B movie. And that’s okay in my book.

I like the arc Indy has in “Skull.” The key line to the whole movie is when Charlie tells Indy “You’ve seemed to reach the age where life stops giving us things and starts taking them away.” And that’s what the film is about. Indy has already lost his dad Henry and Marcus Brody. Now because of the events of the opening of “Skull” he’s under suspicion by the FBI and has lost his job, and his country.

Through the course of the film he finds a long lost friend, a son, and the love of his life. Just as “Knowledge” was the treasure of the inter-dimensional beings. Finding a family was Indy’s.

I think Indy 5 will focus on Indy’s legacy and what one leave behinds for others.

I couldn’t agree with David m more. I can stomach everything in the movie except Marion. She doesn’t even appear to be trying to act. She makes me want to turn the tv off every moment of her screen time.

I’m absolutely fine with the aliens from another dimension, and I love a lot of the action sequences, the humor and the elegant staging Spielberg always excels at.

I just think that the story structure is lacking. The first sequence in which Indy and son are going to South America to find the first skull and get captured drags immensely. The film picks up again with the marvelous chase. But then the rest of the film, including the finale, again is neither particularly engaging, exciting nor funny - it goes through the motions, for my taste.

Also, there are too many characters in Indy´s posse this time. Just Marion and son would have been enough.

The opening sequence in the warehouse is my favorite one in the film. And I do like Indy picking up his hat from his son at the end - small details like this one are peppered throughout the film and they are delightful.

I’m curious how they will pull off the next one. The son will hardly be asked back, but in these days an old protagonist is unfortunately considered a no go unless a young second protagonist accompanies him. Rumors about a daughter will probably prove true. Hopefully, the narrative will be stronger this time.

I’m absolutely fine with the aliens from another dimension

Yeah. In Raiders we see the spirits flying around, melting everyone. In Temple we see glowing supernatural stones. And in Crusade we see an immortal Knight and holy water that completely heals Connery’s wound. So aliens aren’t that much of a stretch I guess, even though I still think the execution could’ve been better there, and in other areas. But 10 years after the original release…who cares? The film was made to be enjoyed and I enjoy it now for the most part.

I think they will introduce a young(er) protagonist as a Mutt replacement/sidekick. Mutt will be mentioned but he’s off somewhere else. As for Professor Jones since he was promoted to Associate Dean at the end of Crystal Skull I can see him as the current Dean nearing retirement. Might be a fun twist to have Indy himself be the one walking down a hall and entering the classroom like Marcus Brody or Charles Stanforth. You could use that scene to introduce the new younger character who’s either a fellow professor working at Marshall College or is a student in the classroom. 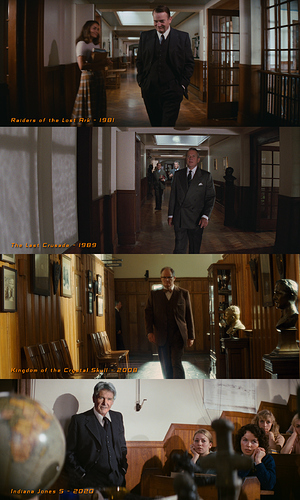 Regarding whether aliens can show up in Indy films, given that supernatural stuff occured earlier in the series:

On the whole, I think the audience can accept one thing that is different from our own world, but little more than that. In Back to the Future, for example, which exists in a world were time travel is possible, it would be quite jarring if ghosts suddenly turned up. Or, in Doctor Who, which explains everything away with science, if there was suddenly a God.

I think there would only be an exception if the film under discussion was a comedy. In which case, genre inconsistencies are dismissed.

in Doctor Who, which explains everything away with science, if there was suddenly a God.

I thought they explained everything “wibbly-wobbly, timey-wimey.”

But that’s an alien, isn’t it?

Also, Indy films are adventures with supernatural occurrences - and those are triggered by the MacGuffins.

If it had not been aliens from another dimension, would it have been more fitting if a kind of occult sect had produced the crystal skulls? Not for me.

Also, the 50´s setting screamed for an alien to show up since this was the decade of UFOs in B-movies. I actually would have been disappointed if a 50´s Indy film had not featured aliens.

We never know, the episode (The Satan Pit) purposely leaves it open ended as to who or what it was.

Point stands, then. It’s such an obviously correct idea, I can’t be the only one who’s noticed it.

Talking of Who and genre, I hope they go back to the “pure historicals” now Chibnall is taking over.

I do take your point, but as the series finest entry (Raiders) LITERALLY ends with a Deux Ex Machina, complaining about script being ridiculous seemed a bit churlish to me.

As I stated, I never had an issue with the aliens. You’re right, it completely fits with the 50s setting. I would have just rather it had been aliens period and not interdimensional beings. Personally, I find the aliens more believeable than the artifacts from the other films actually being supernatural.

Yeah, the blatant aliens who they claim arn’t aliens were the result of Spielberg and Lucas having different feelings on what the magical being should be…not convinced either knows what a compromise really is.

On the whole, I think the audience can accept one thing that is different from our own world, but little more than that.

Except that everything in the series is different from our world. In “Raiders” , the Ark was “one thing that’s different from our own world,” but then the stones in “Temple” make it two, then the Grail in “Crusade” makes it three. And along the way, we get priests who can magically remove your still-beating heart, 500-year-old knights, yadda yadda. Obviously, Indy doesn’t live in anything close to our world.

And I’m not sure that’s a good thing, really. “Raiders” works because for most of the film we think Indy does live in our own world, and that it’s a movie about a fists-and-bullets adventurer, not ghosts or angels. The notion of the Ark of the Covenant being a real thing – real in the sense that it actually provides a connection to the Almighty – starts out as a far-out, ridiculous concept to Indy, the government men and basically everyone except nutty old Adolph, but as Indy and Nazis race to find it and progressively stranger things happen (like the swastika spontaneously burning off the crate), real suspense grows, until when the lid comes off and all Hell breaks loose (literally), we’re left to go, “Holy Crap, it’s the real deal!” An old-time serial takes a left turn into supernatural horror, and it’s a clever idea.

The problem is there’s nowhere left to go after that. After a brush with God, you can’t follow up with adventures that are down-to-Earth. Indy can’t just fight standard, Earth-bound Nazi plots in the sequels. We thought he might have a more Earth-bound adventure with “Temple,” seeing as how it was a “prequel” set before his brush with Divine Wrath, but no, that one had those goofy power stones, or whatever. So now the Ark isn’t even Indy’s first brush with the supernatural; it’s just another day at the office.

Four films in, we have a character who lives in a world where it’s all real, every myth from every culture: avenging angels, immortal guardians, chalices that grant immortality, voodoo curses, flying saucers buried in jungles. Indy goes from an old-time serial hero having real-world adventures to Fox Mulder with a hat. Like an M Knight Shamalan movie, we can never be surprised again; from the first frame, we’re thinking, “okay, what’s the ‘impossible’ phenomenon this time?”

In other words, I don’t agree having supernatural elements in the first 3 Indys makes a Sci-Fi twist unworkable in “Skull,” because the brakes came off a long time ago. Basically, anything is possible in an Indiana Jones film, which makes them wonderful and pointless at the same time. If they want to end the next movie by transferring his consciousness into Chris Pratt through a magic spell, how can we cry foul? We’ve swallowed everything else.

The “one thing” I referred to is religion-based supernatural phenomena, whatever its manifestations.

Would you include inter-dimensional travelers under that umbrella, then?

Indy doesn’t face god-stuff and space-stuff in a single movie, so maybe you’re saying they only get one “rule break” per picture? But over the course of his career he faces everything, so in his reality the rules are more like suggestions. At this point, they could pull in super-heroes, time travel, vampires or pixies and it wouldn’t make much difference. If Mutt can lead a monkey army and Marion can turn trees into car elevators, anything’s possible.