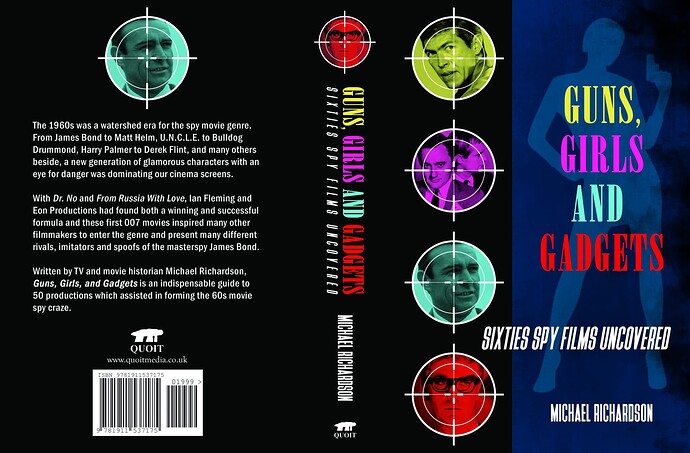 Each chapter begins with a teaser of the film’s storyline designed to interest the reader and make them continue reading, but not giving away the ending so readers can still watch and enjoy the movie, even using the book as a guide while watching. The chapter then continues, giving information on the original novel that the picture is based on, or if the production featured an original character and screenplay then how the concept came into being. All the chapters give an overview of chronological events, which continue with an explanation on how the senior production crew came together and how financial backing for the movie was obtained.

The story of how the picture was assembled continues with writing and rewriting the script and how the project was developed, before progressing into pre-production and casting. From here things continue with location filming (both in the UK and worldwide), behind the scenes and studio-bound interior filming. Going further, tailored effects are highlighted including the hero’s vehicles and firearms that are all name-checked. Attention is also given to censorship issues and in all instances the original UK cinema release dates are given.

There is also a listing of the credited cast and production crew, plus uncredited cast and crew. This section is then followed by the listing of merchandise associated with the film including spin-off paperback books, 7 inch vinyl singles, soundtracks on both LP record and CD, plus DVD and Blu-ray releases all complete with dates of issue.

11 WHERE THE SPIES ARE

12 THE SPY WHO CAME IN FROM THE COLD

17 A MAN COULD GET KILLED

28 THE SPY WITH A COLD NOSE

30 THE MILLION EYES OF SUMARU

15 points of interest. The answers can be found in Guns, Girls and Gadgets: Sixties Spy Films Uncovered.

01 What legal action in both the UK and USA prevented The Liquidator from receiving its planned cinema release in November 1965 and delayed proceedings until screenings began in August 1966?

02 Having travelled to Switzerland with an Aston Martin DB5 for location filming for Goldfinger, what occurred with the vehicle that prompted a second Aston Martin to be quickly dispatched from the UK?

03 Which of The Man from U.N.C.L.E. feature films was originally going to co-star the characters April Dancer and Mark Slate from the spin-off television series The Girl from U.N.C.L.E.?

04 Which British comedy actor was almost killed while driving a car during the filming of The Spy with a Cold Nose?

05 In an attempt to stop location filming on the second Harry Palmer movie Funeral in Berlin what did East German border guards frequently do?

07 What happened to the fight scene between James Garner and Anthony Franciosa in A Man Could Get Killed?

08 Which actor broke a heel bone after falling from a wall on location in Portugal and caused the temporary suspension of filming on Hammerhead?

09 The production crew of which film hastily departed Hong Kong after the authorities warned them that they could not guarantee their safety in the city after months of rioting there?

10 Who was the first actor cast to portray Commander James Ferraday in Ice Station Zebra?

11 Before production began on Dr No, which actor turned down the opportunity to screen test for the James Bond role, believing that the first 007 film would be nothing more than a B-movie?

12 While in West Berlin the production crew of The Quiller Memorandum were going to film on location at the Chez Nous bar and nightclub, but something caused a change in the shooting schedule?

13 In addition to Deadlier Than the Male and Some Girls Do, how many other Bulldog Drummond properties were originally planned back in 1964?

14 Why does The Naked Runner finish so abruptly?

15 Examples of obsolete reel to reel magnetic tape computer cabinets seen in the movie In Like Flint, had been previously seen regularly in which science fiction television series?