For those interested, A-Box has announced a one-off mystery collectable box to be released in December for Christmas. Pre-orders are now available here. 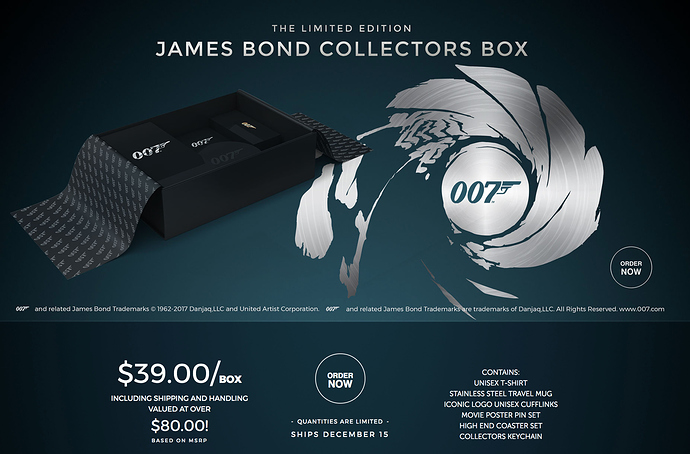 I’m not usually swayed by such things, but Bond collectables at an affordable price are Bond collectables nonetheless! Plus, from what I gather, A-Box has done a damn good job with licensed merchandise for other series in the past…

I bought one as an early Christmas present for me!

Yup, I’ve ordered one too.

Tempted by the Kingsman one as well.

I also ordered one! If you’re curious of what’s in the box, there’s a unboxing in this video:

Glad there is a video. Now I can save my money.

I would prefer more geeky stuff like Funko Pop bobble heads or die cast cars. I have no need for cufflinks.

Yep. Looks like they damaged the box a bit in shipping, too.

Nothing that exciting, but for a “box full of who knows what,” it could have been a lot worse, I guess.

I do you hope it’s successful so that they do other boxes. Depending on the contents I would happily order.

I am actually pretty happy with all the stuff they include. I wear cufflinks quite often so those will be nice. Also those coasters look pretty awesome. I too like when they use in-universe designs for their merch, rather than just sticking a 007 on everything.

I think I like the contents better than what’s included in the Kingsman A-Box, which seems kinda sparse for the pricetag. 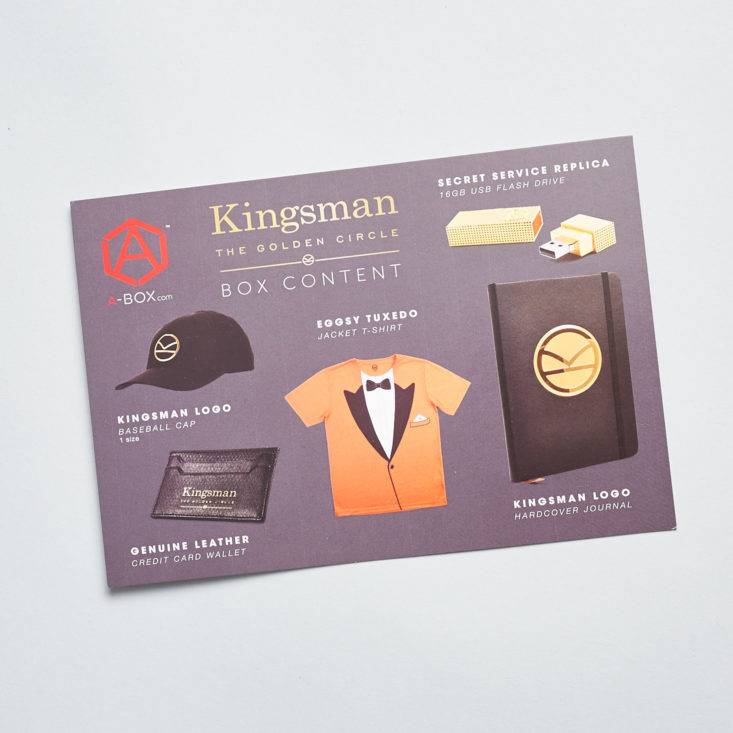 Surprisingly I quite like the Kingsman’s box content. If that was in the Bond box I would buy it. I would get more use out of those items than coasters or pins. A 007 branded thumb drive or journal would be great.

Fair enough. I think the only thing I would have used from the Kingsman box is the USB drive, and maybe the wallet. But yes, to echo your previous sentiments, I hope these sell well enough that they make more down the line!

They could totally do a set with Scaramanga’s Golden Gun. The pen and cufflinks could be the same while the cigarette case and lighter could be repurposed as a card holder and USB drive. Put them together and you have the Golden Gun.

That sounds AMAZING! Yes, I would love if they did that for a future set.

I must admit, they suckered me in with the keychain and the coasters for the Bond box. Plus, it is Bond paraphernalia… The only type of which I permit in my living space!

Does anyone, preferably in the UK, have one of these, and would be willing to exchange their size medium t-shirt for a large?

I received the box as a Christmas gift but the t-shirt is too big for me. I emailed A-box to request an exchange, and the other day I finally received a reply to say they were sold out.

PM me if you are able to help.