I know that Pearce brosnons lookalike, Douglas James has doubled for him in long shot scenes in his movies, and also stood in for him at Premier screenings in foreign countries. I have also seen his face implying he is bond, holding a beer on a poster advertising a Portuguese beer back In 2006,and i remember seeing him, as bond, in a tuxedo on an omega watch advert display in a jewellers window in 1998.

Does anyone know the extent of the work the lookalikes of the bond actors have had?

A friend of mine, who sadly passed away aged 38, 5 years ago, dad was a professional Timothy Dalton lookalike was apparently used in an advert filmed on Tower Bridge dressed in a tuxedo running away from a helicopter for a cable TV station in Japan, but i can’t find any reference to it online

The lookalike/double market is a tricky one. Effectively these people make a modest business out of a more or less obvious semblance with their celebrity colleagues - but the occasions where they can possibly be booked are usually limited to the opening of shopping malls, weddings, hen nights and the like. Typical small scale stuff that’s not earning them fortunes.

That a doppelgänger should actually appear on an ad for an official marketing partner like Omega must already be highly unusual. After all they already have contracts with the actors - Omega under their ambassador monicker - and it’s not clear why they should hire a double.

The Asian markets may be somewhat different in that they possibly make more use of lookalikes. But even there it’s probably regarded a bit ‘cheap’ not to invest in the real thing. At a guess I’d say Eon probably keeps an eye on any such activities and steps in at the first chance, i.e. whenever they feel ads or spots are coming too close to the real thing.

A tricky business indeed. Had to dig deep down in my archives, but I knew I had this somewhere, a picture from 2005 when Brosnan and his lookalikes lost their jobs:

That said, a while ago, I had the opportunity for a little talk with Swiss DC double Martin Langanke. The pictures on his website somehow don’t really do him justice, when you sit at a restaurant table with him, you really think it’s Craig himself.

Fun thing: in the beginning, he didn’t actually realize that he looks like Craig. It was friends who gave him the idea. He’s a cool guy and very down to earth. He’s very much aware that his time is done when Craig’s tenure as Bond is over, but he’s enjoying the ride as long as it lasts (and is happy about the extra money he can make).

He told me that he was hired as stand-in on various occasions. I believe it started with QoS, but I’m not ertain if it was for more than one movie. He met Craig once (well, it was not exactly “met”): he was waiting for his call somewhere behind the scenes, when suddenly a trailer door opened, and out stepped DC himself. He eyed him up, then turned around and disappeared in the trailer again.

To this day, Langanke still doesn’t know if he should count this as approval or disapproval…

Looking at the prices the u.k based Daniel craig charges, he can’t be doing that badly out of it

I know that Pearce brosnons lookalike, Douglas James has doubled for him in long shot scenes in his movies

And, only on Tomorrow Never Dies. Douglas James popped up, before shooting on TWINE started, saying he expected to be repeating his performance. In the end, he wasn’t actually used.

Sorry, it was the bloody auto correct

The funny thing was, I have a friend named nasty Alex, who is 6 foot 8 inches tall and quite well built, years ago, we went with another friend to pick up his girlfriend from her house, and her younger sister opened the door, took one look at him and said “oh my god its Jaws!”

He was so stupid he said “i look nothing like a shark!”

The funny thing was, we knew a girl named George, who was only about 5 feet tall, had blonde hair and glasses and sometimes wore pigtails, and when she walked along with nasty Alex, they really did look like Jaws and dolly!

Fast forward 5 years and the bloke who has the girlfriend whose sister called nasty Alex Jaws, had been through several other girlfriends but was now married and settled down with a daughter who was 16 months old. We went over to see them one evening and the baby daughter was staring at nasty Alex, touched his leg and kept pointing to the television! Her dad said “well, i did get given all the Roger Moore 007 videos for Christmas! She probably thinks he is Jaws!” 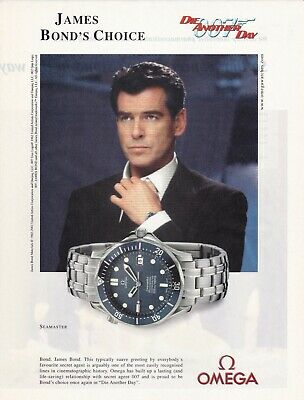 Is this Douglas James? I’m quite sure this is the display I saw in the window of a jewellers all those years ago…

I really cannot say since I don’t know Douglas James. But I highly doubt Omega would release marketing images of a double when they are shelling out for the real article.

That’s obviously Pierce. And IMHO the only way anyone could possibly confuse the two gentlemen is if you reproduced that image at 5 pixels tall by 3 pixels wide and displayed it in a low light environment.

I’m reminded of the exchange in TMWTGG: