It seems that someone is attempting to fund a recital of the entire score to Moonraker with an 100-piece orchestra and choir in High Wycombe in January 2019.

If you want to help fund this effort then the Indiegogo page is here: 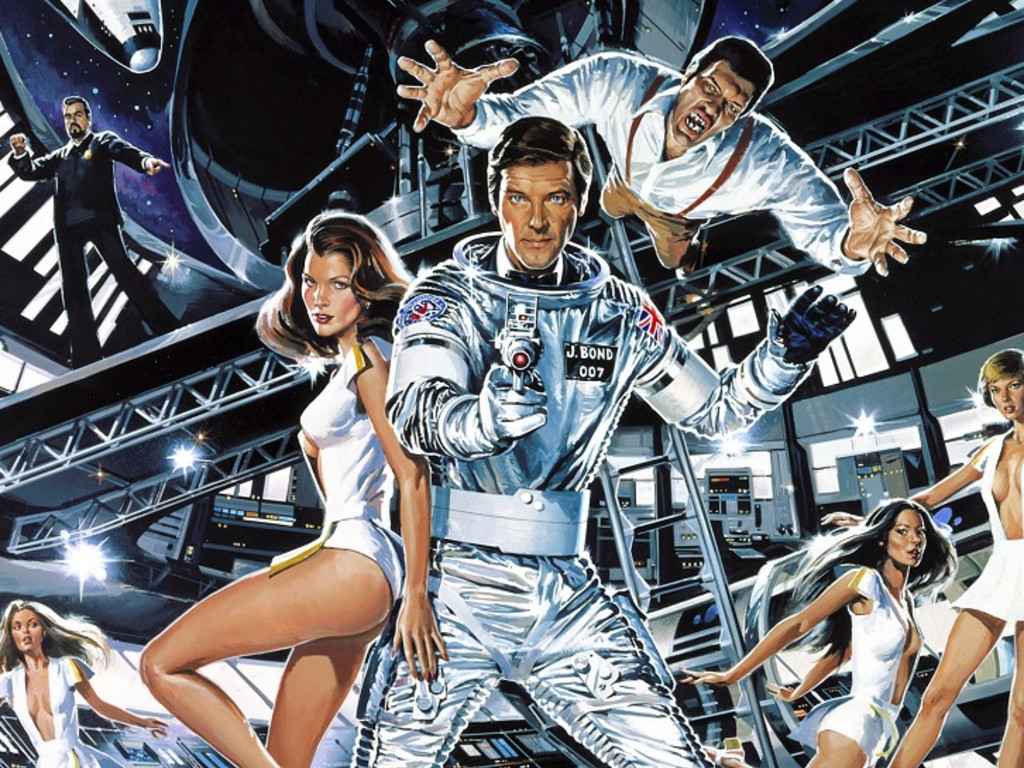 The James Bond fans of the World have often lamented the inability to be able to hear one of John Barry’s most beautiful Bond scores - that of Moonraker - in isolation, and complete.

Performed by a 100 piece Orchestra and Choir, this will lovingly bring the score from Moonraker to life.

This will be a complete one off opportunity and will not be recorded.

This is a must for me… Going to try and pop over for it.

I read bout this on the filmscoremonthly-board - sounds intriguing.

I am just disappointed that it won’t be recorded. There was an effort started a few years ago to do a re-recording of the whole score - but again the rights holders refused.

I don’t get that those people rather sit on their rights and make no money out of it, instead of actually earning a little with it, by handing it over to experts who will make sure the score is done justice to.

John Barry had originally pitched this as a double album to EON. Then they presented it in mono on film. This would indeed be very interesting.

I doubt I’d be able to attend, but I’ve made a small donation as i think it is a fantastic idea and I hope it is a success.

Just to reiterate that none of the above is intended as criticism. I wish the project every success, and long for the day Q the Music come to a venue a bit closer to my home, as I will be first in line for tickets.

As a big Moonraker fan this is fantastic news, and it’s something I’d love to attend, but obviously won’t be able to. It’s a shame the concert won’t be recorded, but it is what it is. Hopefully Bryce is able to make it over.

I’m planning to do my best in '19. I was at the premiere of MR in '79 so it holds a special place in my heart and the full score is classic Barry. If so, I’ll inquire about a proper recording. 2019 is getting busy for me.

This also feels like something of a must for me, however the timing (January!!!) is horrible, literally any other time of the year would be better for me;
With 2 small kids and 4,000 miles away, it will be challenge for me,
However, whats life without a few challenges to overcome…

This is still a big “maybe” unless they reach their $$$ goal. But, if they can, they’ll make the money back ten-fold and, if, without being sued, manage to record it and offer it for sale or download, it’d be a big win. While I’ve had the pleasure of enjoying many Bond title songs performed live during a concert by the original artist (including a Vic Flick acoustic session of the Bond theme), any full original score done by a full orchestra is a treat not to be missed out on.

I wonder if EON has any plans of licensing the movies out with orchestra performed scores;
That seems to be a big trend right now; The Harry Potter movies have been a huge success, and right now Raiders of the Lost Ark and Jurassic Park are selling out everywhere;
The Star Wars movies are coming this fall as well;
Have to imagine there’d be some interest for classics like Goldfinger or OHMSS

Funding only at 4% of the target

For me personally, if I’m going to book a flight, hotel etc in the U.K. I’m going to want to know the concert is absolutely going to happen, and this is just too risky for me to feel comfortable doing that, especially when it’s not backed by EON…

Spent a bit more time reviewing this;
Unfortunately this is not going to happen.
Firstly it has to be funded by mid-May;
which means they need to sell the bulk of the seats by then,
unfortunately most people don’t plan their entertainment 8 months in advance;
yes you may buy a ticket to see U2 that far in advance, but a show like this? unlikely,
I really don’t understand the idea behind the execution of this;
Why choose High Wycombe, In January?
For this to succeed (ie to sell x amount of tickets in advance) it needed to be in a big city (London, Manchester, Edinburgh) and either in summer or nearer Christmas.
I hate being negative about this as I’d love to see it executed and I’d love to be there when it is, but the plan seems fundamentally flawed.
This is a shame as I’d imagine there’s a % of us out there that would love to see something like this happen.

HELLO EVERYBODY! Warren from Q The Music here.

Thank you firstly for the discussion - the fact that you are talking about it and spreading the word, makes a difference. I’ve read the points above and I thought I would come on and answer them.

As you will probably know, EON squashed the re-recording of the Soundtrack a year or two ago. I don’t see any issue with putting on a concert, as we are not breaking any laws, simply performing live music and paying the Performing Rights to do it. Although we are not EON affiliated, they have left us alone for several years, and I don’t see them pulling the plug on this concert. To protect that, we are not recording the concert to sell it.

However, those of you who are on our Friends Scheme (www.QTheMusicShow.com/friend) will know we often record our concerts and give them away to our subscribers…

NOT that I am saying it will be recorded…

Yep - get it is not ideal. However, I have to plan this in to the year where I think I can execute the concert to THE BEST standard it can be. Anyone who has ever been to a Q The Music concert will tell you a) the standard is ridiculously high b) no stone is left unturned and c) it is done with a love of Bond that you won’t find anywhere else.

I’d simply rather not do the concert than put it on, and it not be to the level you want and deserve. I want everyone who comes to go away thinking it’s the best concert they have ever been to.

If i stick it in the middle of the year, there’s a good chance my trusted musicians will be being pulled in all sorts of directions doing other orchestras and shows.

It seems a lot of money (£60k) and to be honest, it won’t even cover everything - that is just the price I need to hit to take the rest on faith. The reality is you don’t see the costs when you book other concert tickets, but these are realistic. The Orchestra and music ALONE will be £40,000. We’ll lose 28% off all purchase/donations to VAT, Indiegogo and Paypal, and theres venue hire, tech costs, PRS. etc etc etc.

£60-£100 per ticket is absolutely comparable to any orchestra in London, and bear in mind the bespoke nature of this concert.

I chose this venue, as its a realistic size to fill (1,100) and it is beautiful too by the way. Putting the Concert in any major city would more or less add a 0 on to the costs, and push the project even harder to make happen.

Completely: don’t book any flights or anything until it is confirmed, but PLEASE book your tickets. If the project isn’t funded, you’ll get it back, if it is funded, it is confirmed.

You may well be right Sir - it may not happen - but i’m disappointed you are completely writing it off without any chance. Negative comments like that will change the mindset into NOT backing it, and then it WON’T happen. It absolutely CAN happen, if people back it.

Essentially, we are talking about 800-900 tickets to sell for a concert. It’s not beyond the realms of possibility.

Yes, it has been a slower start than I had hoped, but I have barely touched it until now as I have been busy touring and performing myself. A lot of major fan sites will be pushing this out over the next week, and part of the issue with anything like this is getting the train moving, once we get through the first £10k-£20k people WILL get on board, I’m sure of it.

If it’s a success I plan to do a different Bond/Barry score each year.

It needs your support folks - please back it. If it doesn’t get there, you’ll get your money back automatically.

Don’t forget, I’m just a fan like you guys, when all is said and done.

Warren
Thanks for your feedback;
I apologise for any negativity on my part but I assure it’s borne out of my passion to see this succeed but my frustration that I personally (and it is just my opinion) do not think you’ve put yourself in the best position to make this happen.
I used to promote shows in the UK myself back in the 90s so I’m fully aware of what goes into this and I, for one, have no issue with the amount you are trying to raise, However, I also know that in order to get people to spend their money (especially that far in advance) you have to have things in place that make it easy for folks to make that decision and my feeling in you haven’t got that in place with this plan.
I wish you all the luck in the world and if you can make it happen I’ll do everything in my power to be there

We’ll have to see

Everything - all the elements - on both sides have to be right. I won’t put on a concert like this unless it’s right on my side too, that I think the conditions will allow me to produce the best result i possibly can.

I’d rather the project not happen, than put it at a time that guarantees it would sell, but would then be sub-standard.

Money is not the motivation…

Besides, whatever time of year I put it, there’s always something in the way!..

This is a shame, but I’m really not surprised,
The scheduling and location of this was not well thought out.
Hopefully he’ll try this again and put a better plan in place to ensure success.
You only have to look at the sell outs for so many film themed concerts to know that there is an interest in this, but it HAS to be in a major city.