I bought yesterday this German book about the James Bond cars.
It looks interesting to me. Anyone from Germany who knows this book and his writer, Siegfried Tesche? His name seems vaguely familiar to me. 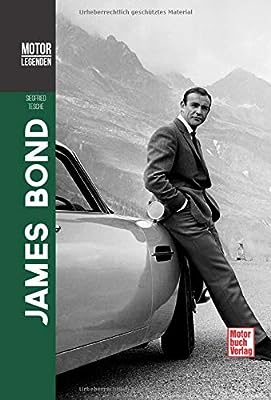 Siegfried Tesche is the German Bond expert. He’s been in the business for more than 40 years and has written or co-written literally dozens of German Bond books, not only on Bond in general but also on special interest topics like Bond music, locations or - in this case - cars. But he’s also written some other movie books, unrelated to Bond. For the media, he’s the go-to guy whenever there’s something going on with Bond.
He’s also an avid collector, his prop collection is legendary. And he doesn’t keep it in the closet but is a regular contributor to Bond exhibitions. And I’d love to spent at least a week digging through his archives.

Nice book. By no means an encylopedia, it’s more based on personal taste. Also has some nice images, rare adverts and that kind of stuff, and even some from the recent Matera shooting (he was on set).

Siegfried Tesche is one of our foremost German Bond experts. He published 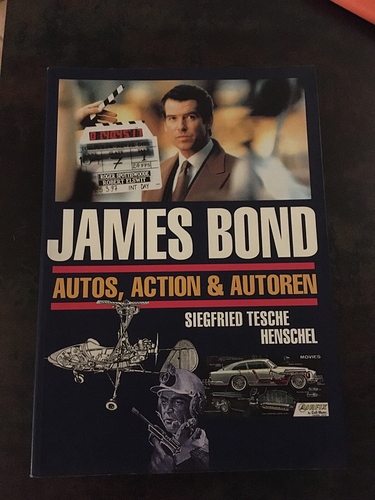 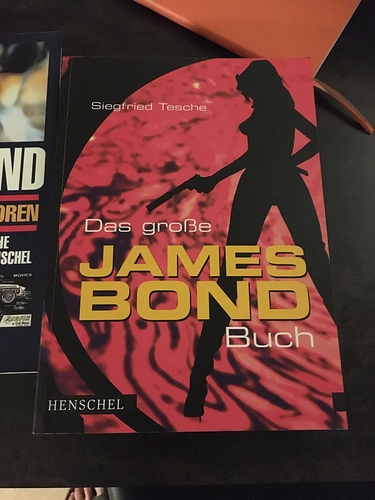 which was in effect a significantly expanded and updated version of the former book - but which also put more of a focus on on the films in general.

From Amazon’s description I think this could be an expanded version of the former tome with added photographs - this time vehicle-themed and with new photographs.

EDIT: Stromberg beat me to it.

Thanks for your replies. I have at least one other book from him, I think it was a German version of basically Steven Rubin’s The James Bond Films incl new stuff of the then new Bondmovie GoldenEye. I will receive the book next week and will tell if it is a good read, or not.

From the amazon reviews it looks definitely worth the money. It seems Tesche went the extra mile and researched the various models and the stunts they feature in most extensively. And Tesche is indeed THE expert on Bond, worked on Cinema’s German version of Rubin’s book and added significantly to countless articles and books on Bond in the German speaking regions.

For example, I only learned Raymond Benson had taken over the continuations when I read this in Tesche’s 1997 book. Yes, there already was that thing called Internet - only you surfed by the hour on a modem connection that could break down anytime. You usually had to have a little list of things you wanted to look up - and rarely did you find all items at once. Tesche’s books were really treasures for the fans - and still are.

The other two books you have shown in your photo’s are they text only, or have they also a lot of photo’s?
My German is ok, but not excellent. I am from The Netherlands and both languages have a lot in common, but reading a huge book in German is another story and takes a lot of time to do.

In the past I bought also a German book about the Bondgirls and one about all the movieposters, both were glossy and beautiful books.
I also bought the books James Bond XXL and James Bond für Besserwisser from Danny Morgenstern, they were a lot tougher to read and didn’t have many photo’s.

The photographs (both b/w and colour) are a main attraction of these tomes. You already see the unique mix in the cover of ‘JAMES BOND - Autos, Action und Autoren’, some very rare images you don’t often see elsewhere. I for one wasn’t aware that Airfix apparently had a DB5 model kit.

The latter book, twice as big, sadly lacks the colour photographs but seems to keep all of the b/w ones. The text itself is also extremely informative - but includes only the films until DIE ANOTHER DAY, naturally. That said, it’s not exactly a ‘film book’ - the focus is a bit wider and production stills and behind-the-scenes are used not as much as a film book would.

Thanks for your kind explanation. I looked them up on Ebay, there are a few of both of them, so I will buy them in the near future.

As I said, be aware that ‘Das Große JAMES BOND Buch’ is essentially the expanded version of the former. So I’d only buy both if I really wanted the twelve pages of colour photographs that the bigger book doesn’t have. They are exceptional and nice to have, but probably don’t justify buying the 1997 book when you are already set to buy the one from 2002. Unless you can get the slimmer book at a bargain.

The most interesting of these pics - to me - is very small and only features on the inside flap of the cover; what seems to be an illustration of the escape scene from John Gardner’s Licence Renewed with a cutaway drawing of the tricked out Saab. But it’s really small, bears no legend and is sadly also not picked up in the text. Would be interesting to learn how that came to be, who commissioned it when for what purpose. It’s probably a drawing by the Saab PR department but we don’t learn more about it.

Aha! I didn’t understand that it is bassicaly the same book. Maybe I go for the first one, because of the 12 pages coloured photographs.