No Time to Die theme song 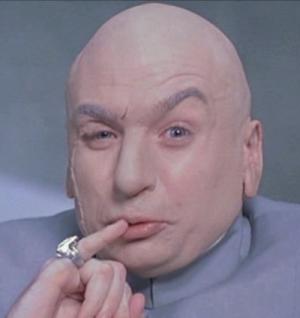 With Phil Collins it’s many years since he’s done anything remotely memorable in my opinion. With folks younger than 30 he’s probably entirely unknown by now. Under that premise I think it’s not all that likely he’d get such a gig. Not unless he’s staging a major comeback beforehand.

Rag’n bone would no doubt belt out something very powerful.

I must admit that beyond the poor joke, he has indeed a real talent.

Don’t let the Hollywood glamour fool you, I bet she’s been dry-cleaned.

Arctic Monkeys seem the logical choice - Alex Turner getting more croonery as he goes on, preview of their new album out next month sounds Bond-esque and his side project is nothing if not a love letter to Morricone, Bond themes, Scott Walker et al… and would be a nice change from the last couple songs which were basically the same song (or rather Smith’s was a facile fascimile of Adele’s)

This is a really subjective issue;
I have strong opinions on it that I am sure don’t align with most others;
Having gotten the bond bug in the 70s, I miss the days of the Barry/Black lush ballad,
I’d love to see that return.
My worst case is someone like the Black Keys, that sounds atrocious to me and just doesn’t fit Bond at all.
I personally was not much of a fan of either Cornell or White’s efforts;
In fact post Octopussy I’d say there’s only been one or two Bond songs I really loved,
Adele’s Skyfall definitely being one of them tho

My #1 choice would be Lady Gaga; I think she could knock it out of the park

My other preferred choices?
firstly I’d prefer the song be written by the composer and a lyricist (say Tim Rice)
and the singer just be a voice for hire; for that I’d like to see any of the following:
Beyonce
Ellie Goulding
Rumer
Samantha Barks
Duffy
All could do a ‘classic’ sounding Bond theme

There are a few bands that I think ‘could’ do a decent job, The Killers for sure and I think the Manic Street Preachers could come up with something interesting.

Lastly re some of the comments above;
U2 (Edge & Bono) did of course write “Goldeneye”
Britpop bands did get there shot, Pulp & St Etienne were among the bands who submitted a song in 97

Gaga would be an interesting choice. The girl has pipes and is open to different music. Her own stuff never really grabbed me, but her duet with Tony Bennett and her performance of “Sound of Music” at the Oscars (which was outstanding and had Julie Andrews misty eyed) really got my attention.

Again though, being old school, bring back Dame Shirley or Sir Paul. Hmmm… Actually, a collaboration between the two might yield something stunning. Granted, the finest and perfect ingredients do not always insure an amazing entrée, but with the right preparation…

I do listen to a lot of US and UK pop music and no one’s gotten my attention, but that’s just me.

There are some artists who probably would have done a great Bond song, but sadly now are too old or not “up to the minute” to be considered:

And there are others that are too obscure/niche to achieve main stream Bonddom fame:

Or they could go back to the Shirley Bassey / Adele well. Just please no Ed Sheeran / Taylor Swift songs.

If they could get a composer and lyricist and Beyonce sing it, that could work too.

FYI, I have no Beyonce, Taylor Swift, Ed Sheeran, or Lady Gaga albums.

I like your musical taste, cgebby, especially the Steven Wilson/PT reference! And yes, Genesis in their Collins-era heyday of mass popularity could’ve killed it!

Sting is an interesting avenue still if you wanted to go soft ballad style. Hell, I still enjoy Anthony Newley’s version of Goldfinger and Sting’s cover of “Windmills of your mind” from TCA '99 was sly enough. Go ballad classic or hard contemporized for Bond 25 IMO. There has to be a punctuation to acknowledge the 25th film though. Maybe see if Arnold could dream up an instrumental that has the edge that OHMSS did in '69. For lack of a better word, it’s got to have some flavor dammit be it vocal or instrumental with or without the title word or phrase. There’s got to be some “tip of the hat” either way.

I like the Dual Lipa rumor, she’s is a great lyricist, and her music would suit a “Danny Boyle” asthetic…

Genesis (seriously, listen to “Just a Job to Do”)

These days it’s such a no-no to admit any semblance of affection for Genesis or Collins… but screw that!

Back in the day (before they’d all reached their middle-aged boring-ballad stage) they were great! Collins and Genesis had a gift for making music that was cinematic - just take a look at Miami Vice - many of it’s best moments are underscored by either Genesis or Collins.

Land of Confusion was one of the greatest rock tracks of the 80’s and for anyone that grew up in that scary era hearing a burst of this track (or Nina’s 99 Red Balloons) instantly returns you to that impeding sense of nuclear Armageddon that itself underscored that whole decade.

To this day I can’t listen to Land of Confusion without getting goose bumps and an urgent need to topple a currupt overlord, or two!

This distrust of authority was certainly a theme for Mike Rutherford; his other band Mike and the Mechanics made another great 80s classic, now lost to time called Silent Running.

Perhaps Land of Confusion and Silent Running would be better suited to a movie like V For Vendetta than a Bond movie. But there’s an argument that this anti authoritarian theme may have snuggly fitted LTK.

For me there’s no doubt that had they turned thier collective skills to Bond In the mid to late 80s they would’ve indeed ‘knocked it out of the park’.

I love the idea of an instrumental for BOND 25.

It would spare us the whole spiel about which currently considered hot but not too edgy artist would get the gig, with the inevitable disappointment because the melody would not be incorporated into the score.

I only fear that neither EON nor MGM or whatever studio inherits the rights would dare to go for an instrumental. The song has become another important marketing tool, generating lots of PR.

Looking for the right artist for the BOND 25-song I would love them to give Mrs. Bassey another chance to shine - but even that seems out of the question because no suit would allow an artist her age to do it. Even Sir Paul would be considered as “not cutting it for the teenage audience”.

Also, with Boyle at the helm, it´s rather probable that he will have to approve the performer and will therefore look for a current flash-in-the-pan.

Sting had “It’s Probably Me” from Lethal Weapon 3, and it is a pretty good example of a song he’d compose for an action movie.

Genesis’ “Domino” is a perfect example of the nuclear 80s Cold War era themes odd_jobbies discusses. Its two parts are also perhaps an example of Genesis doing both a Bond ballad and action theme.

The ire against Collins seemed to come from music critics and fans of the band’s 70s era. He got a lot more flak than Yes did, which went through a similar art to commercial arc. But hip-hop artists gave him some love by sampling his beats a lot. You should check out Collins’ autobiography. I’ve actually read a lot of positive comments about Collins’ music in the comment section for his videos on Youtube, of all places. I know the Gabriel era is considered the best, and though my favorite is the '76-79 period, I listen to their 80s music the most.

As for LTK, Gloria Estefan might have been a better fit given the locale, at least for its ballad.

I lIke the idea of Bond 25’s theme song making a distinctive stamp on the series the way “You Know My Name” did for the reboot.

Also hope they go for two songs, both opening and end titles, with at least one thematically tied into the score (ala The Living Daylights.)