As we got off topic in the Accidental Collection thread, I thought we might as well create a thread for novelizations.

Of the Bond novelizations, I’ve read the two Christopher Wood entries and the 3 Benson ones. James Bond, The Spy Who Loved Me is, without a doubt, my favorite and a great, Fleming-esque Bond story in its own right. Of the 3 Benson novelizations, I though The World Is Not Enough added the most to the film. It did a great job of filling in the gaps for both Elektra’s and Renard’s motivations. We find out that Renard was truly in love with Elektra, whereas Elektra did care for Renard (and Bond strangely), she was really just using Renard and had her plan to kill her father in the works for much longer than her kidnapping. One problem Benson has though, is writing action. Some of the film’s biggest set pieces (i.e. the Thames chase and the shootout in the missile silo) are very shortened in regards to their film counterparts.

Benson would have been working from a script and wouldn’t know how long the final cut of the sequences would be.
I noticed that in Z-10 as well - lengthy descriptions of each martial arts move employed by Bond against his opponent & vice versa, but in a running chase - like escaping Sunni’s apartment building, “Bond pullout his Walther and shot him dead”.

I thought TND was the best of Benson’s. In fact, I think each author’s first novelization had the most work put into it, until they realized that nobody at Danjac cared and that it was just a writing assignment to get out of the way. DAD should have been better, as it was supposed to be an anniversary landmark (as was TSWLM).

Well, Raymond Benson was certainly prolific during his tenure as a Bond writer having written 9 novels and 3 short stories in just 6 years. So it would certainly seem likely that the novelizations received less editing and drafts than the original novels.

I just read Wood’s James Bond and Moonraker for the first time, and my thoughts on it are very mixed.

There is a whole host of differences from the movie. Among them:

Overall, I wasn’t too fond of the book for two reasons:

That being said, there were some great highlights, especially the expanded Amazon and space station sections which I felt added drama and suspense to the story. This is why I found the last few chapters to be a significant improvement on the first 2/3 of the book.

I also enjoy watching Calvin Dyson. He has a particular joy in everything he does that really goes a long way into showing the time and care he puts into his content.

JBAMR is easily the weaker of the 2 novelizations, but I don’t think either one is particularly bad. For a first time reader, I would definitely recommend JBTSWLM to be read first.

Yeah, I had read JBTSWLM about a decade ago and overall enjoyed it more than this one. That being said, I do recall not being such a fan of Wood’s writing style even then, so I guess I shouldn’t be too surprised that I had a similar experience (in that regard) this time around as well.

Yeah, I love the parts when Bond gets to the space station–most especially the space walk. Ever since reading it, I’ve always wished they would have filmed that scene for the movie. That would have added some nice danger and suspense.

My guess is there was an early draft that had the space walk that didn’t survive until the end.

I’ve read them all. I agree with most of you, Wood’s James Bond, The Spy Who Loved Me is the best novelisation, however I did enjoy Benson’s effort, especially… Die Another Day, which is much better to read than to watch

. Benson at least tried to develop some aspects of the story, as well as the characters. Gardner seemed to write Licence to Kill and GoldenEye simply because he had to.
It is a pity that no novelisatins are being written these days. Is it simply because there is no permanent author on board, or are there some issues between Eon and Ian Fleming Publications?

I suppose it’s simply because the whole film tie-in market has dwindled away somewhat. Novelisations used to be a great way to ‘relive’ the film before the days of home entertainment - but after people were able to pop in the film whenever they wanted they probably sold worse with each year until it didn’t make sense any longer to commission them.

The market seems to have shifted to franchise works for film and tv series (Buffy, NCIS and countless others) where more or less ‘original’ stories are finding their eager fans. Perhaps that’s easier to handle for authors since few films today are easily retold within 350 pages of commissioned narrative.

In some cases there’s also that element of secrecy regarding the film’s plot. Hard to imagine nowadays having a film tie-in in bookshops four weeks before the film is actually released. With MOONRAKER that was the case; the abridged version of the Christopher Wood novelisation was even serialised in a Sunday newspaper back then.

If this were still the custom we’d have been able to buy the film tie-in to NO TIME TO DIE (by Anthony Horowitz maybe?) in early March and would now just discuss whether the film will stick to the story as told by the booklet.

or are there some issues between Eon and Ian Fleming Publications?

I believe there were and still are issues between EON and IFP. That all started back in 1966 when IFP (then glidrose) refused publication of Geoffrey Jenkins’s Per Fine Ounce. It angered Harry Saltzman so much that he vehemently refused for a movie to be made of Colonel Sun and ever since it seems that EON and IFP have been at odds with each other. Also, from the time John Gardner was hired until the end of Raymond Benson’s tenure (1981-2002), we were getting James Bond books every year. Since Benson retired, we get books only barely more regularly than the films. For whatever reason, IFP has become as unreliable as EON.

What I said when it came up before…

And the IFP hire did the film novelisations for all Brosnan’s films for the lols?

The official website for the films also sell IFP owned material including this; Which is IFP owned from pitch to publishing.

EoN might be keeping to their dads notice of only using Flemings books (mostly, as Die Another Day has intentional Col. Sun references) but both EON and IFP know how mutually beneficial having a friendly relationship is.

In regards to the longer gaps - The books sell more when there’s also a new film, and IFP know it. MGM’s financial woes delay the films then the film’s delay the books - as anyone who has the IFP licenced graphic novel, Reflections of Death, on preorder will have noticed.

That’s true and IFP did handle the novelizations of the Brosnan films. Though, strangely, their website only lists the 2 Gardner novelizations, not Wood’s nor Benson’s efforts. James Bond: The Authorized Biography of 007 is also not listed there.

It’s because they’re not in print. The fact so many are still available pleasantly surprised me. 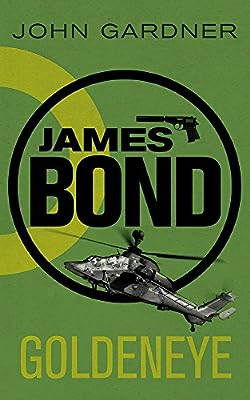 I wouldn’t read too much into the fallout over Per Fine Ounce. How much of it actually existed, and of what quality the book was, is not clear after all these years. Eon didn’t actually need the book, could make up its own ‘continuations’ of the character and made extensive use of it over the years.

Continuations and novelisations both used to be pretty good business and Eon earned good money with the latter. But these days the books need the films much more than vice versa. If there was significant money to be earned from novelisations they would probably be made, or made again.

I believe there is a bit of tension between Eon and IFP, but nothing which is ever explicitly stated. Cubby himself alluded to it when he offered them the novelization of LTK, saying in an interview, “I thought it would make us all a big, happy family.” (paraphrase)

Well, the copyright for ‘Solo’ reads as follows:

Same for the Dynamite comics. This means whatever IFP wants to do, Eon has a say in it. IFP are the appendix that cannot act on its own any more. That may or may not be a cause for tensions, I cannot say either way. But the comics are now running for several years and apparently doing good business even with branching out a bit.

IFP will likely keep up the continuations sporadically - while the comics more of less are tailored for the fanbase and cater to the demand between films.

Thanks for the clarification, Dustin. Honestly, I’ve always thought novelisations, in general, are pointless. I’m not sure if I’d read one if I wasn’t a hardcore fan. Most people just need what they see on the screen. They don’t need to know more about characters’ motivations, plot details etc. And surely they’re not particularly interested in nuances, the differences between the movie and the book.
And I guess there are not enough of us to justify comissioning a novelisation anymore (as opposed to, say, Star Wars fans, where apparently it still works).

I believe there were and still are issues between EON and IFP. That all started back in 1966 when IFP (then glidrose) refused publication of Geoffrey Jenkins’s Per Fine Ounce. It angered Harry Saltzman so much that he vehemently refused for a movie to be made of Colonel Sun and ever since it seems that EON and IFP have been at odds with each other.

Wow, thanks! It’s a shame to admit, but I’ve never heard of this story

Well, the copyright for ‘Solo’ reads as follows:

Same for the Dynamite comics. This means whatever IFP wants to do, Eon has a say in it. IFP are the appendix that cannot act on its own any more. That may or may not be a cause for tensions, I cannot say either way. But the comics are now running for several years and apparently doing good business even with branching out a bit.

IFP will likely keep up the continuations sporadically - while the comics more of less are tailored for the fanbase and cater to the demand between films.

It also means that when the copyright elapses on the Flemings, it’s all still trademarked so jolly good luck to all seeking to make a quick buck out of it at that point.