I’ve always wondered what Per Fine Ounce would be like. As much as I know, I fit it into the Fleming continuity being set in 1966 between Colonel Sun and maybe Devil May Care. 2 pages were released detailing soda-water syphon cylinders, I believe, potentially exposing a gold smuggling ring out of South Africa. It’s known that the 00 section was being shuttered and Bond resigned from the service to tackle the matter on his own. I think it was mentioned that gold bicycle chains, baobob trees, and Lake Fundudzi were meant to figure into the plot. I’m wondering what everyone seemed to think the main story would be about. My take is that Bond resigns from an increasingly irrelevant MI-6. In South Africa, Bond finds a country ravished by Apartheid. With the backdrop of proxy wars between the US and Russia, the gold smuggling threatens to wreck the British economy and Bond must ally with the anti-Apartheid resistance to break up the smuggling ring and put an end to atrocities. I think Bond also gets put into a Most Dangerous Game scenario involving being hunted in a forest of Baobob trees. At least that’s my take. I also created a potential cover. 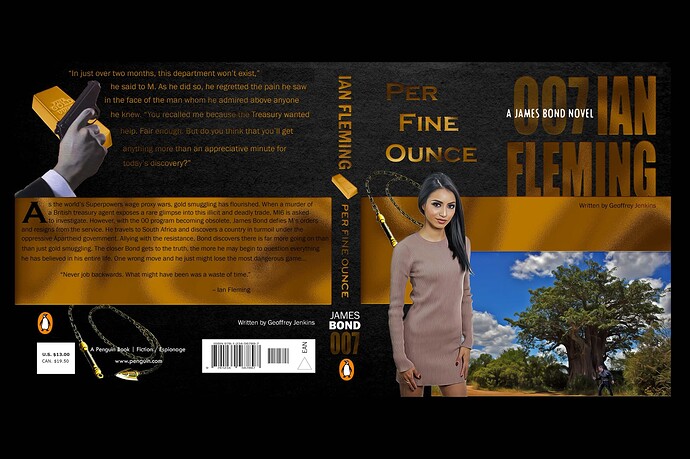 Has anyone ever read this?

Amazon.com: Per Fine Ounce: based on the revered South African author, Geoffrey...

I’ve heard of it, haven’t picked it up though. Supposedly, Jenkins’s 1973 novel, A Cleft of Stars, uses some or most of the unused manuscript for Per Fine Ounce. I’ve been meaning to pick that one up as well.

I actually have that Peter Vollmer Per Fine Ounce novel, but, for whatever reason, have not read it yet. I was planning to read it by the end of the year, but I should probably make it my next read before Kim Sherwood’s Double Or Nothing comes out.

As for A Cleft Of Stars, I do have that one, AND I have read it. Other than being located in South Africa and there being a baobab tree scene, I don’t see much in common of what we know of Geoffrey Jenkins’ Per Fine Ounce.

I have always been a little puzzled over the ambiguity of whether or not the manuscript exists.

Wikipedia claims that Peter Janson-Smith himself was unsure whether IFP still had it, though he believed it unlikely they did. That raises the question of who precisely would know for sure? And why this person has not supplied a definitive answer?

Maybe IFP has been more transparent and I’m just not aware of that news?

In any case my, curiousity mostly exists to sustain a hope that it is at least theoretically possible the manuscript is still out there. The banal, more likely reality is that the 60-year old stack of paper was long discarded and no one who was around is alive to confirm.

I have always been a little puzzled over the ambiguity of whether or not the manuscript exists.

We know 18 pages of it does, because his son has them and he released 2 of them, complete with his father’s handwritten notes. The rest of it? Who knows. It’s a moot point though because that thing would be so bogged down in rights issues and it just wouldn’t be worth the expense to all involved to sort them out.

I guess it really begs the question as to whether or not there ever was a completed manuscript. It’s possible glidrose rejected it before Jenkins ever finished it.

My gut says it was finished because it’s unlikely an author would turn work into the publisher while he’s writing, rather than the finished product by an agreed upon date. Just a guess, though.

Who knows, but this getting released would be the biggest blast from the past head trip imaginable for Bond - outside of a secret Connery film sitting in the archives.

Or an as-yet-unknown Fleming novel still hiding in somewhere in IFP’s archives (or Fleming’s estate). Or even a build of a true Goldeneye 007 sequel for N64.

It’s a moot point though because that thing would be so bogged down in rights issues and it just wouldn’t be worth the expense to all involved to sort them out.

Perhaps, though circumstances always change. That’s why it would be nice to known whether the manuscript does still in fact exist.

I think this idea would fit nicely into the novel.

Based on the two page extract of the manuscript released in 2010, Bond seems concerned about shipments of gold being flown from South Africa to the UK. Perhaps the South African-based villain is intent on intercepting the shipment in order to tank the pound and enrich himself (a bit derivative of Goldfinger maybe).

Bond ingratiates himself with the villain and is taken on a big game hunt, which provides a rich opportunity for Fleming-esque travel writing.

While investigating the villain’s warehouse, Bond discovers he has smelted the (stolen?) gold bullion and re-cast it as bicycle chains for smuggling, which are then painted to conceal their nature. He is discovered in the warehouse and must dispatch a guard with one of the unpainted gold chains.

Bond fails to escape and his brought to the villain’s game park for the Most Dangerous Game sequence, where he hides in the tree.

I’m unsure how Lake Fundudzi might fit in. Perhaps the villain has stashed the bulk of his gold at the lake bottom before processing, drawing the ire of the Venda people who hold it sacred.