It occurred to me that fellow members of this esteemed forum might be amused to hear of a current project influenced by the works of those vintage British thriller writers - Dennis Wheatley, Dornford Yates, Eric Ambler, et al – said to have inspired 007’s creator.

(Early Hitchcock films and Captain WE Johns’ Biggles adventures might be added to the above list of reference points. And for those among you with long memories of forum topics past, the old Orson Welles/Moonraker article would be another.)

So without further preamble - for anyone who may be all interested, a (rather lengthy) trailer/promo video for the project can be viewed here:

I’m a big fan of British vintage thrillers. So, just to be clear, this will be a radio drama set in 1947? Could you give us more information? Like a longer synopsis, release date etc.

Best of luck with it!

Many thanks for your interest, BondFan.

Yes, Filthy ’47 is indeed a four-part audio serial. No fixed release date as yet, although the voice work has been recorded and the project is currently in post-production.

England, 1947. Former Land Girls Joyce and Kay scrape a meagre living as a cover artist and model for lurid paperbacks. While painter Kay prefers the quiet life, the tall and ebullient Joyce still resents being turned down for wartime espionage work on account of her height.

However, Joyce belatedly gets her chance to “do her bit” when, together with two new chums, pilot turned pulp author Peter West and his old comrade Flight Sergeant Byron Bayley, she and Kay stumble upon a plot to plunge the world back into war.

Not everyone, though, is who or what they seem.

Can Joyce and her friends gain the upper hand when confronted with a lethal cocktail of mischief mixed from ingredients including a secret nerve gas formula, a coffin full of guns, a primitive video disc whose contents would shock the world, and one woman’s fanatical thirst for revenge?

The faulty links in the above posts should now be fixed.

Just a quick progress report on the audio serial, for anyone who may be interested. Post-production is almost complete and a new 2-minute animated video trailer can be viewed here:

Hello all, hope you’re keeping well in these strange times.

For anyone who may be interested, Episode One of the vintage pulp-style four-part audio serial FILTHY '47 can now be heard for free at: 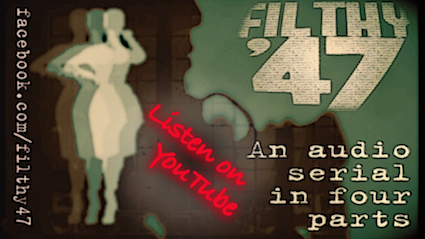