Show down (or show off) - Your Bond collection

Inspired by a few recent posts, I thought it’s about time to have a thread for people to post pictures of their Bond collections. I mean, we all have shelves full of things for which the people we have to do with in our daily lives most of the time frankly don’t give a damn. For them it’s just geek stuff.

Why not show them to people who are actually interested in that kind of thing: your fellow CBners.

Glad that just recently, I cleaned up my shelves, so they are somewhat presentable. Here’s mine, all in one picture: 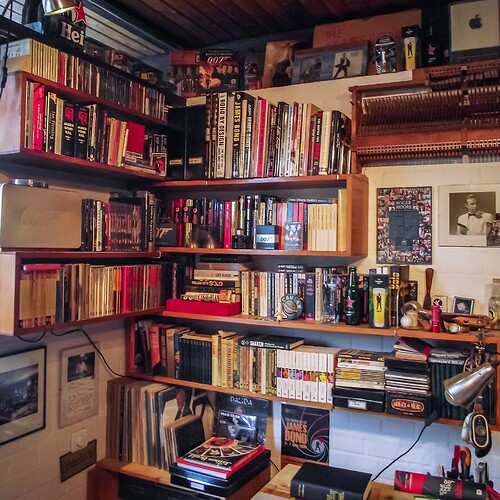 I have a lot of my Bond stuff still in storage, but I will post at least my new bookshelves later.

Why do I sense there might be a Bond Collection Deathmatch in our future?

Dibs on the Ghetto Blaster!

Do I see some of the old Ullstein editions there? Plenty more than just the three titles they had, no? And some ‘Scherz Action Krimis’ if I’m not mistaken.

The old Ullsteins, yes. Three titles, but thirteen books. Five different versions of CR, but only four of both LALD and DAF. Not sure how many versions there actually were, but I’m guessing that from that set, it’s only one LALD and one DAF missing.

Particularly fond of that first CR and DAF, as Ullstein hadn’t developed their trademark “red ‘k’ on yellow rectangle” trademark by then and just went with random colours. Not quite easy to find.

This is the German CR first edition: 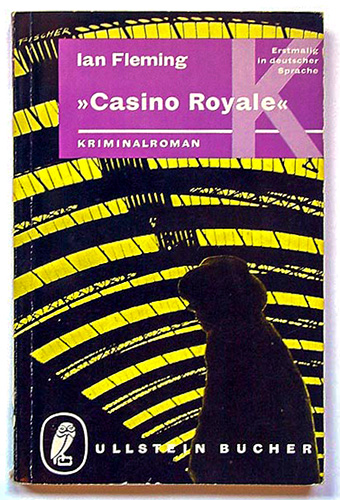 But it wasn’t the first German Bond book. For whatever reason the first one was DAF (catalog number 792 as opposed to CR’s 809): 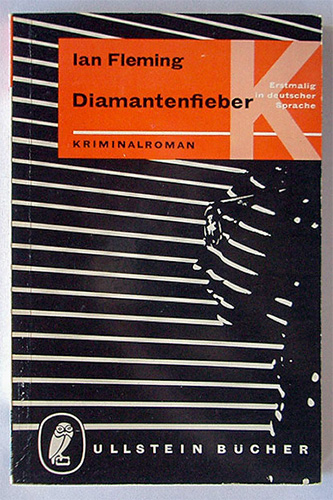 Scherz Krimis galore, various editions, among them the “Phoenix” edition, which had been the only Bond hardcovers on the German market for ages.

I used to have the Ullstein versions of Casino Royale with Fleming’s face and Diamonds are Forever with Connery’s. Live and Let Die was a Connery with bared teeth (but not, I think, the one you find with Google’s picture search; it was bigger and showed less of the hair if memory serves).

Not exactly. Paid less than a fiver for each.

When you collect German Bond books, the problem is not with money but with finding them.

When you collect German Bond books, the problem is not with money but with finding them.

And I suppose the state of preservation. Mine fell apart after a few decades. 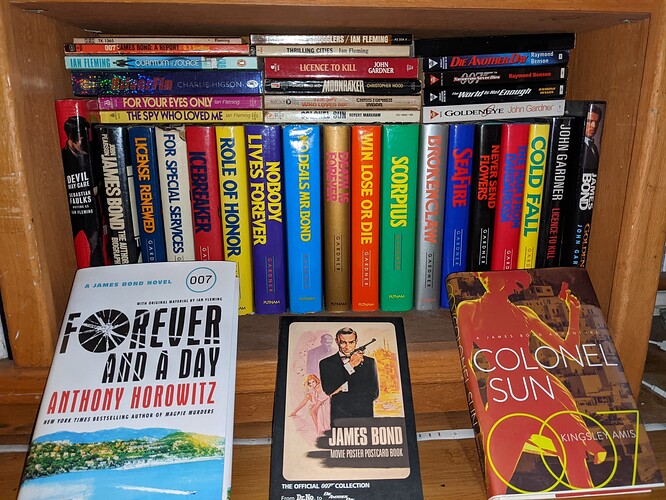 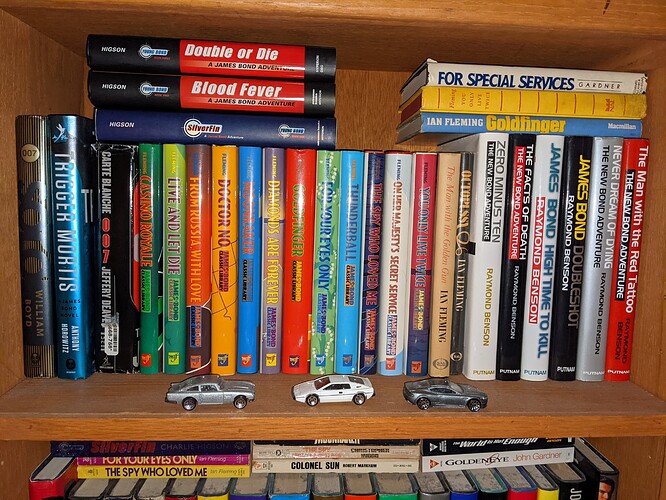 I’ll repost mine here. Interestingly, I only have a second copy of For Special Services because an ex girlfriend’s dog chewed up the first copy (canine critical review?)

My previous house had all the posters hung on walls, which are now in a storage corner of my condo. Unshown are the CDs, Laserdiscs and VHS tapes. My ex wife used to refer to all this as the Bond bookcase as I had one with glass door coverings protecting it all from dust. Of course, now it needs a whole room of its own!

Cool stuff. Most of my collection is boxed up at this point but I’m seeing a lot of familiar “friends.”

@cgebby: you might want to check on those Gardners. I’m seeing some black markings on the top edges of the pages that could be mold. Actually they look like what I found on a few of my books last year, which turned out to be droppings from silverfish. They love to eat glued book bindings and they went for my Gardners, too. I ended having to toss For Special Services and Scorpius, though in all honesty that wasn’t the biggest tragedy of my collecting life.

I dusted the area with diatomaceous earth and invested in a good dehumidifier and since then, no more problems.

Blast. You appear to be correct, sir. Some of it is dust, but there is some mold too. Thankfully, this is not happening to the Ian Fleming hardbacks (or the Bensons, go figure.) I have seen some silverfish on occasion, but think most of the damage happened at my last condo whose moisture density rendered a few CD changers inoperable. Thank you.

“What sharp little eyes you’ve got.”

Mold, the natural enemy of any library. Lucky I’ve never had problems with it.

First, you need to stop it from growing. Simple method: put the books into the deep freezer for a few days (-18°C at least). After that, keep them in a warm and dry place for a few days, to get rid of the remaining moisture. Then: baby powder on the molded parts, brush off after a few days.

Not sure if this works, never tried it myself (but my brother is a book dealer).

The room where you keep them needs ventilation on a regular basis. It also helps to dust them off every now and then. Dust attracts moisture and thus becomes the perfect breeding ground for mold. Silverfish also love dust, and their excrements are a fertilizer for mold…

CDs, a few car models, secondary literature in both English and German, card games (the red box is the LALD tarot) a few VHS tapes: 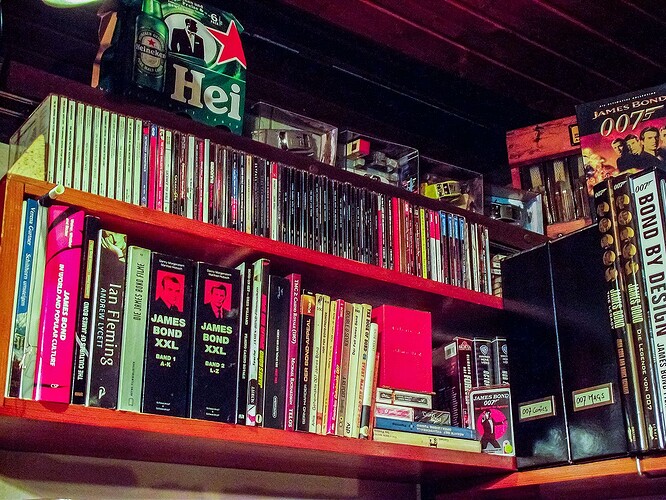 Top: various large objects, below: Comics and magazines (more of that stuff in boxes), large Bond books in both English and German, most of them should look familiar. 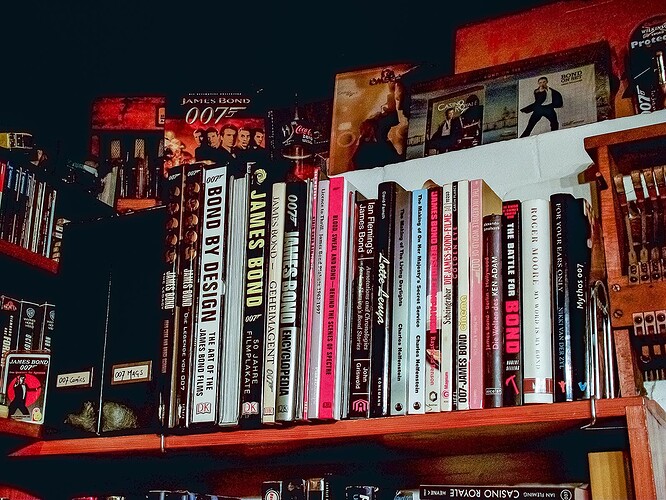 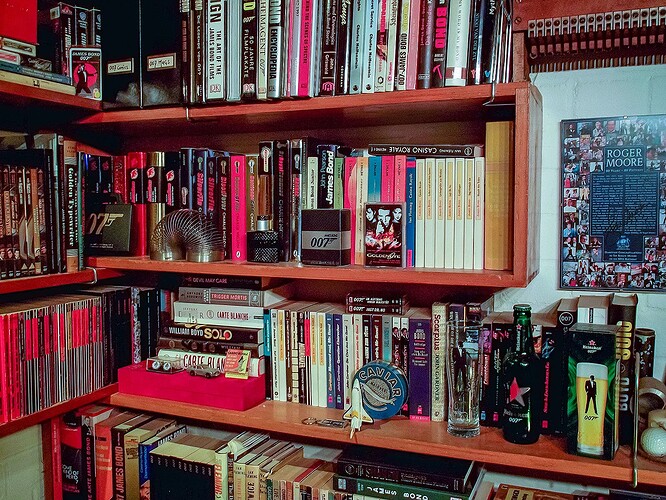 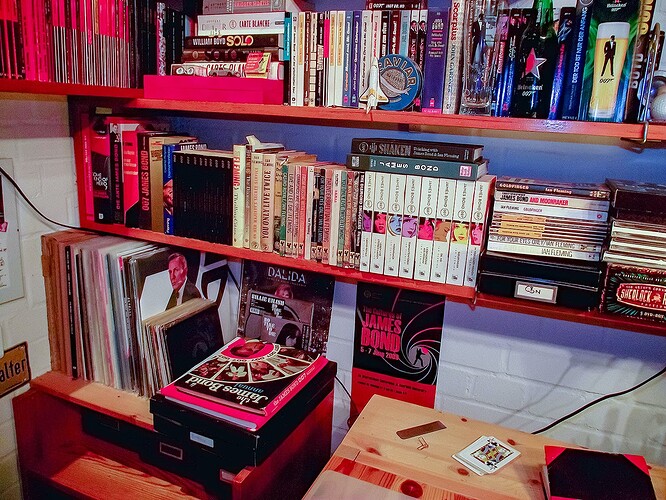 Posters, more magazines, comics, newspapers, souvenirs like like premiere Tickets, a few autographs, leaflets and all that stuff stored in tubes and boxes.

“What sharp little eyes you’ve got.”

It’s a curse, I have a knack for noticing problems. Not necessarily fixing them or avoiding them in the first place, mind you.

I never seem to be ready when a waiter comes around to take my order in a restaurant because it takes me twice as long as anyone else to get through the menu. The first time I’m checking it for typos. LOL

I’ve never found one yet that didn’t a few…

If you have an area that is prone to getting mold or want to take extra care of some collectibles, try buying a few desiccant bags. They basically suck moisture out of the air so mold can’t grow. I keep some under my car seats so my car doesn’t get that musty feel/smell in it.

The Poppy Is Also a flower - never knew there was a book?!? That has to be a rare item indeed.

It’s a DVD, sorry to disappoint

Which got me thinking. Where’s my Chitty DVD? 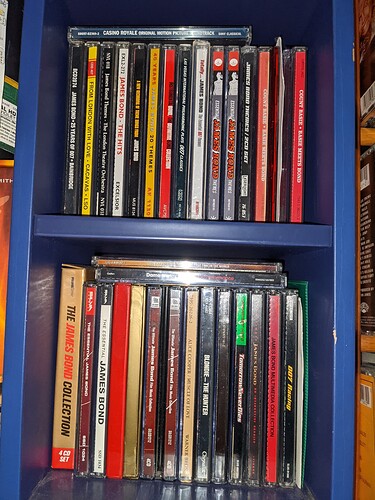 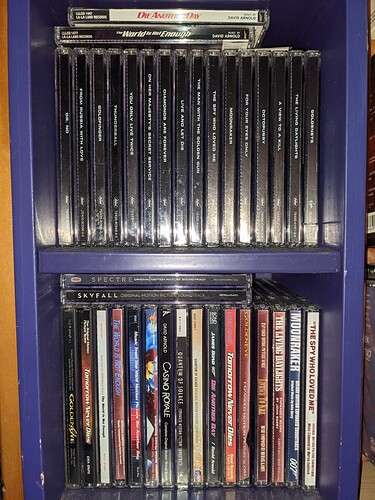 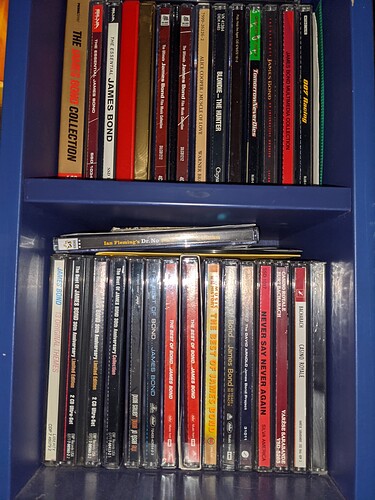 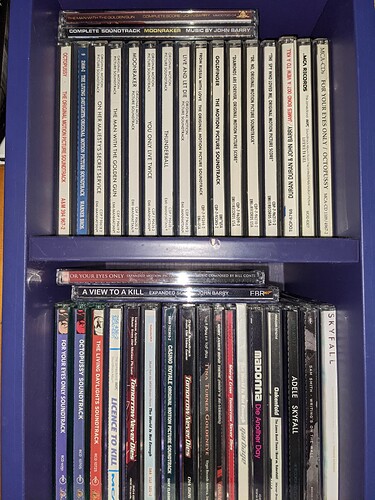 Funnily enough, they are in a blue IKEA CD shelf tower with 7 levels!

Look carefully and you can spot theShirlet Bassey, Blondie, Alice Cooper and Pulp CDs that had alternate title tracks.

A quick check confirms that I still have the Bond OSTs on vinyl up to The Living Daylights, though they were stored with the Laserdiscs and not my records. (Thought maybe I had sold them to a used record store for a second.)

Thanks, CBners for your suggestions, and especially David_M, for noticing. After wiping the books with a microfiber cloth, it appears to have mostly been dust. None of the other books had it, and it was just the exposed part of the Gardners with the issue. They also passed the smell test.

Mold was a serious health issue for my mother, so I’ve learned to take it seriously. As I’m currently riding out Northern California’s atmospheric river of storms, I was a little paranoid about having some moisture problems. But everything seems dry, and as the bookcase is in a hallway, well ventilated.

Always good to have a well informed and helpful support team! 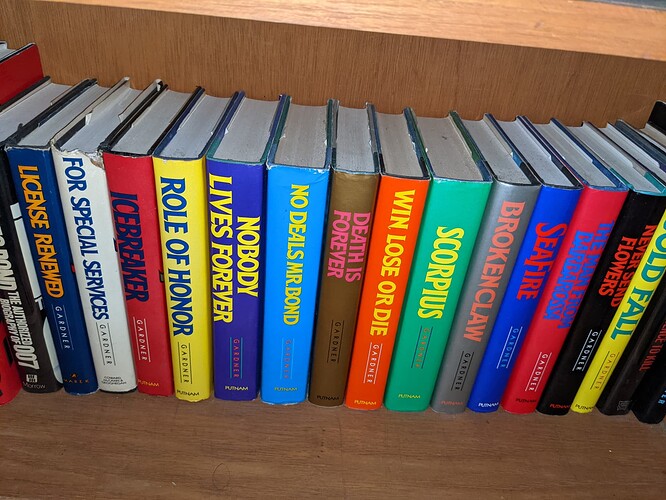