Looking though Amazon and came across the Ted Bell series of books featuring his super spy, Lord Alexander Hawke. Also came across an article dated October of '16 about a film based on this series (details here: http://deadline.com/2016/10/alex-hawke-novels-paramount-pictures-mi6-movie-series-ted-bell-kurt-wimmer-lorenzo-dibonaventura-1201842319/).

Anyone have any experience with this series? Worth a read?

I have not read them but I read a lot of that type of book and this series is always very highly recommended within that “community.”

2 other thrillers I can recommend to read right now is “The Terminal List” by Jack Carr (a former SEAL) and “Warning Light” by David Ricciardi.

I have read the first five Hawke novels and I love them. Bell is now one of my favorite authors. Very highly recommended.

I read one on the Hawke series, SPY (#4), and didn’t care for it. Obviously everyone’s taste is different. I found it long without enough substance to support it, simplistic, and outlandish without actually being fun. It would seem the Clive Cussler Dirk Pitt books are a partial template in terms of over the top action and evil plots, but I found it to be inferior to that series, which I find to be B-grade to begin with. Maybe I was in a bad mood when I read it…

That said, I’m glad you enjoyed them, Tiin007. Perhaps I should try another one. Which would you suggest?

I’m personally much more excited to see Daniel Silva’s books about Mossad agent Gabriel Allon be adapted, though I wish it was for a film series and not television.

SPY was actually my least favorite of the whole bunch.

In terms of which I would recommend, it’s a tough call. Of the five that I’ve read (the first five), TSAR was definitely my favorite. But I also think TSAR may only really be appreciated having read the others.

I think starting at the beginning (with HAWKE) is probably your best bet, although that first novel is the most pedestrian in terms of writing style.

SPY was actually my least favorite of the whole bunch.

I think starting at the beginning (with HAWKE) is probably your best bet, although that first novel is the most pedestrian in terms of writing style.

I think having read SPY, I’m on board with the concept of the character and his co-horts to pick another up out of sequence and not be lost. I’ll look for TSAR (maybe as an ebook) and give it a try.

Thanks for the recommendation!

Thanks y’all for the great recommendations!!!

A head’s up that the new Ted Bell book “Overkill” is out today. The cover even mentions Ian Fleming 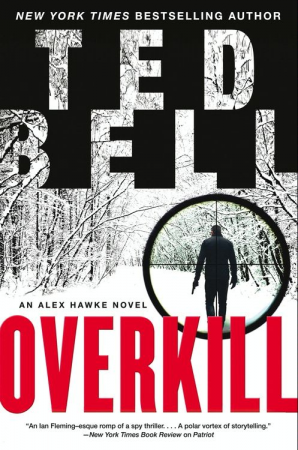 Working my way through HAWKE right now, and my question is does the writing get better? It seems a bit disjointed at this point in the series.

Yes, the writing certainly gets better. As I mentioned above, “Hawke” has the most unrefined writing of the series.

I think Ted Bell had actually submitted “Hawke” as part of a competition to get published. He won the competition and his writing career took off from there.

Good to hear! Once I finish Hawke I’ll give Tsar a try.

Ted Bell is on record describing Overkill as his “Goldfinger”.

I am now - according to my Kindle thingy - 12 percent through Bell’s first Hawke novel…am I really spending lifetime on a character who is written even less likeable than most of Fleming’s villains? A cardboard with the drawing of a matchstick superhero on it that makes Batman* - any Batman - seem like a documentary.

Jack Reacher, this huge slab of rock character without any form of emotional resonance outside what plot calls for, beats this crude fantasy of a notorious overachiever by miles. And I only dimly remember having read two Dirk Pitt novels about twenty years ago, but still feel more fond of Pitt than I probably ever will of this Hawke guy.

For me the most baffling thing: how can an American author - of the pulp genre, but still - gush about the ‘English Union Jack’ (a fetish probably, given how often Union Jacks are mentioned; might apply for the top floor of the Beeb) - and nobody sets the record straight for him? I’m amazed.

And yet…there is something that makes me read on, makes me ignore the bizarre display of canine devotion to posh British, no, English nobility, makes me forget my intense dislike for the simplistic caricature of a hero (‘…decorated for valour many times. He was simply good at war.’) to find out how it’s going on and what will be the big deal about it.

I realise of course that this is genre food where Bell’s many fans love and expect exactly this painting in broad strokes and stark contrasts, where characters talk like 80s tv shows and adventure in general plays along the lines of an A-Team episode. This is fodder to kill time (lifetime). And I’m currently in a train with another three hours of journey time ahead of me, so I might as well read on…

*Batman also seems a closer template than Bond: multi-billionaire heir (what we now consider an achievement already), retired-or-not naval officer who is somehow secretly shared by American and British intelligence and geopolitical interests, business magnate and ‘sixth-richest man in all of England’, operating with his own unlimited funds and more or less as self-therapy of childhood trauma.

I have read 2 Hawke novels and will never EVER read another. I forced myself through the first one, believing that at some point I would connect with it and see the Bond comparisons. Years later I picked up another (SPY) at a thrift store and given that it was a few years later and a few books deeper into the series thought I might finally click with it. Nope. It was worse than the first one. I ended up skimming the last half and constantly groaning at how bad it was—bargain basement Clive Cussler (another author I’m not a huge fan of but can appreciate decent pulp adventure storytelling even if it’s not top tier).

The longer I read the more it feels like a take on Bond - if Bond was replaced by a younger rich psycho Blofeld (complete with ‘title’ and ‘ancestry’ and private little battle squadron) who just happens to work for ‘us’ instead of ‘them’.

I am aware there could possibly be some redeeming quality in these books; sadly it escaped me so far. If pressed for a verdict I’m afraid I’ll just have to concede that this series is not for me…