The Many Lives of James Bond: How the Creators of 007 Have Decoded the Superspy

The Many Lives of James Bond: How the Creators of 007 Have Decoded the Superspy.

My book on James Bond comes out in hardcover in November (and on digital today).

Pick a Bond, any Bond. When you hear the name James Bond what comes to mind? Is it the movies or Ian Fleming’s novels. While the cinematic Bond and the novels are the most visible parts of the franchise, they are just the tip of the Bond iceberg. 007 extends to video games, radio dramas and even to TV. My book, THE MANY LIVES OF JAMES BOND explores them all. 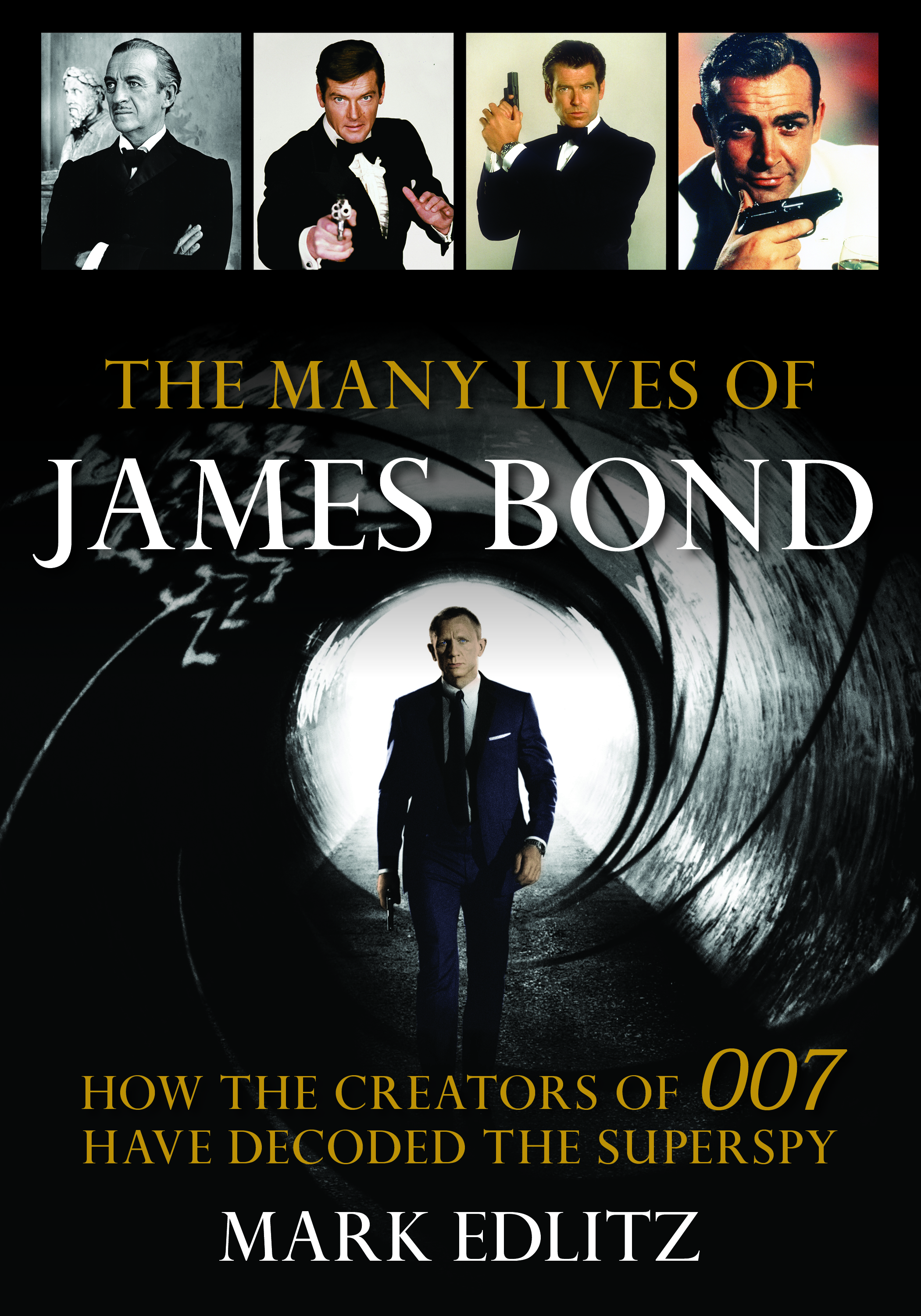 About the book.
Lots of people love James Bond. But how many have actually been Bond? THE MANY LIVES OF JAMES BOND offers an impressive collection of original interviews with actors who have played Bond in different media, as well as in-depth interviews with many of the diverse artists who have contributed their talents to the making of James Bond movies, television shows, novels, radio dramas, comic books, and video games.

These wide-ranging interviews provide a behind-the-scenes look at the artists’ goals, the challenges they faced, and how they met them. This book is also the first to examine the Bond character through the eyes of the artists who interpret him.

As the author talked with these creative people, a through-line emerged. It involves a series of related fundamental questions about Bond that artists must reckon with when interpreting the character. Who is James Bond and what, if anything, beyond successfully completing a mission does he really want? What drives him? Why did he become an agent? What is the nature of his inner-life? Would he be capable of a satisfying life away from high-octane adventure and danger?

These questions challenge and inspire the creators to pull back the curtain on a deliberately opaque figure in an attempt to explore and analyze Bond’s interior life and thought processes, and how the Bond actors have interpreted the role.

The Author:
Mark Edlitz has made a name for himself by writing about beloved and sometimes overlooked manifestations of pop culture. He wrote about Princess Leia’s Metal Bikini for The Huffington Post, the Superman Broadway musical for Hero Complex in the Los Angeles Times, and about the forgotten Doctor Strange TV movie for Ain’t It Cool News. Mark wrote the book How to Be a Superhero, a collection of interviews with 35 actors who played superheroes over the last seven decades. He also produced and directed Jedi Junkies, a documentary about extreme Star Wars fans. Mark lives in New York City with his superhero wife and two villainous children.

Some lovely words about THE MANY LIVES OF JAMES BOND from some of my favorite Bond scholars.

“We all want to know ‘the inside story’ of Bond - and thanks to Mark Edlitz we now have possibly the fullest collection of Bond oral histories ever published in a single volume. What I particularly liked about The Many Lives of James Bond is that it recognizes the many and multifaceted contributions to Bond in all his media forms. An essential addition to every Bondologist’s bookshelf.”
– James Chapman, Professor of Film Studies at the University of Leicester and author of Licence To Thrill: A Cultural History of the James Bond Films.

“Mark Edlitz has provided an insightful book that goes off the well-worn path in terms of interviews and provides perspectives from people associated with the films, novels, comic books, and video games. Even if your Bond library is extensive, you’ll want to add this informative and highly entertaining work to your collection.”
– Lee Pfeiffer, co-author of The Incredible World of 007

“Just when you thought that there was no more information to be printed about James Bond, Mark Edlitz comes along. And the material here isn’t just broken fragments of rock with a faint glitter of fool’s gold, either; it’s the real 24-carat stuff. Edlitz has interviewed a wide variety of people connected with portraying Bond, from writers through actors to game designers and even poster artists, and each one has an attaché case-full of fascinating stories about their approach to the task. Bond has been accused of being a two-dimensional character, but if this book demonstrates anything, it demonstrates that Bond is multi-dimensional. Someone (I’m not sure who) once observed that every man wants to be Bond, but no man would want to have dinner with him. Based on this book, I’m guessing that Mark Edlitz must be a fascinating man with whom to share a dinner table…”
—Andrew Lane, co-author of The Bond Files .

If you think you know all there is to know about 007, think again - Mark Edlitz has compiled a remarkable treasure-trove of 007 interviews, with insights not only from actors, filmmakers, and authors but also from the creators of James Bond music, comic books, and video games. There is much information here that has never before been revealed, making this a must-have for both casual and hard-core James Bond fans. Pour a martini and dive into the many amazing worlds of 007!
— Bruce Scivally, co-author of James Bond: The Legacy

He wrote about Princess Leia’s Metal Bikini for The Huffington Post,

I’m afraid that did make me laugh. However, good luck with the venture.

I ordered this book a couple of months ago at Amazon. I’m very curious.

After you take a look at it, if you have any questions or thoughts, please let me know. I’d be happy to try to answer them.

Amazon have been recommending this to me for a while. I’ll get it, but do know that I WILL pester you if I have questions

When I saw it on Amazon as a pre order I almost immediately ordered it, because it realy looked very interesting to read. I will let you know what I think of the book as soon as I have receive it and have read it.

Orion --Thank you and feel free to pester away.

I’m always looking for new books about Bond, but a lot of them on Amazon nowadays are just written by fans and are very superficial and most of the time about 80-100 pages, which is not a lot, but yours is more than 300 pages and is announced as the largest ever collection of original interviews with actors who have played Bond, so it seemed to me that a lot of effort was taken in writting this book.

Thanks for letting me know. Yes, I did put a lot of effort into writing the book. I think it took about three years to research and write. I hope you enjoy it.

My copies arrived. Check it out! 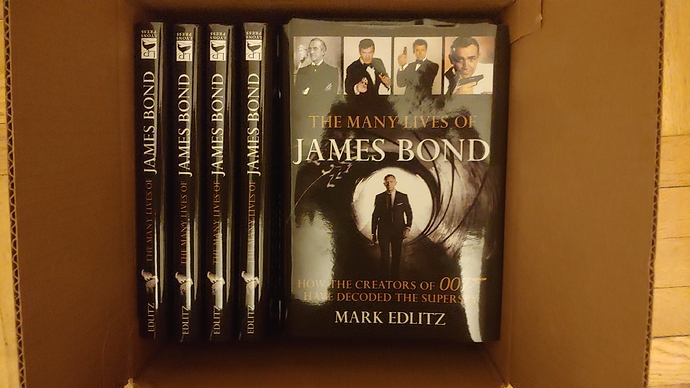 This is very exciting (at least for me)!

The Author:
Mark Edlitz has made a name for himself by writing about beloved and sometimes overlooked manifestations of pop culture. He wrote about Princess Leia’s Metal Bikini for The Huffington Post,…

Overlooked? I contest that…

Otherwise, you’ve sold a copy there. Though my wife is going to kill me.

Thanks Jim! Much appreciated.

Dustin: Haha and a fair point. I suppose it could be beloved “or” overlooked manifestations of pop culture.

And many, many thanks for giving the book a shot. That’s really great. If your wife gives you a hard time, let me know and I’ll write her an apology letter.

Got the book this week and I have been reading in it the last couple of hours and reached page 92.

It’s a very good read and it has very interesting interviews in it.
So far I have read interviews including with Martin Campbell, Roger Spotiswoode, John Glen, Bruce Feirstein, Tom Mankiewicz , Leslie Bricusse and Don Black. All fun and interesting to read.

Don’t expect a lot of movie- and promo photo’s, because there are non in the book (the only ones you get are on the front cover), but instead you got a lot of beautiful drawings of Connery, Moore, Lazenby, Bronsnan, Craig etc.

I highly recommend this book!