The Next Film Names

Hope you are all well

I am sure this has been Done to Death(there’s one), but let’s have a play

What story titles would you call the next couple of films?
Are we going :
Shatterhand
ShameLady
For Queen/King and Country
Risico

Or a complete original of your own. I would like to hear your thoughts

I have loads too…

Which Fleming story does ShameLady come from?

I would like to see them use Shatterhand at some point, but after the juvenile internet response the last time it was rumored, it feela like an impossibility.

The Property of a Lady is another one I’d like to see used, though its being decidedly non masculine and non edgy sounding might prevent that.

ShameLady has always been touted as a possible title. Not exactly sure from where.
I know a few fan made films and fiction have used this name.

I agree. My wife laughed at Shatterhand and you have to wonder if TPTB changed the title because of the innuendo

ShameLady has always been touted as a possible title. Not exactly sure from where.

Oddly enough, it’s the title to a Charles Hood spy thriller by James Mayo and was one of the many book series that tried to cash in on the Bond craze in the 60s. One of the Charles Hood books was adapted into a movie, Hammerhead starring Vince Edwards. 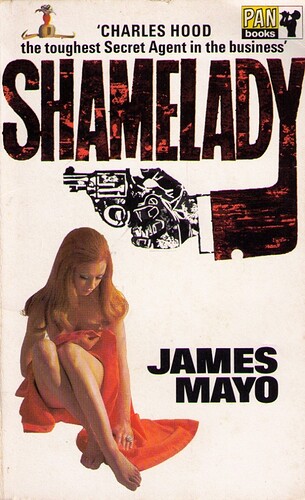 Guess that will not be used lol

So…
I have (quite a few) Bond title ideas (a bit like John Gardner), and I hope you humour me…

The only Fleming ones left that could be movie titles are Risico and The Property of a Lady, and even so, those stories have already been adapted in FYEO and OP.

Shatterhand has a copyright issue with a character in German, and it’s story was part of NTTD. I was pulling for Garden of Death, as that has a trace of Fleming, and would have made the three best Craig movies named after locations. It fit thematically with NTTD, but I can see why the marketing department would go with No Time to Die instead.

There was a working title for the For Your Eyes Only book called The Rough with the Smooth. My Enemy’s Enemy was also thrown around a lot, but that too is practically a line in NTTD.

Fleming had a way with words that is very hard to duplicate. There’s an ironic turn of phrase he mastered. What he did with ‘live and let live’ and ‘you only live once’ are maybe even more ubiquitous than the original phrases. Others have tried, occasionally coming close–Win, Lose or Die, The Facts of Death, Skyfall–but they lack his panache. There’s just such a mysteriousness to names like Dr No. Even the single word titles are genius–Goldfinger, Thunderball, and Moonraker. They’re suggestive without being explicit.

Spies don’t love. Cold war (or even present day) Russia isn’t a place love is from. That’s the genius of Fleming’s twists. Die Another Day and No Time to Die sound Bondian, but they’re not Flemingesque. In the same book he had “we have all the time in the world” and 'the world is not enough." Put them together and he’s saying we don’t have enough time, which ties in to his Jack London quote in the next novel.

Thank you for your response. Very insightful

Do you have any of your own?

None that are worthy.

I like when they honor Fleming rather than mimic him. So Goldeneye, SPECTRE, and The World is Not Enough were great titles to my mind. Licence to Kill worked too. For the most part, I think EON has done fine with non Fleming titles.

The only bad one is Tomorrow Never Dies, though it made for a good song lyric. Die for Tomorrow might have been an option as it’s a twist on ‘live for today’ and was what Elliott Carver wanted people to do for his newspaper.

If I remember correctly, Shamelady was the alternate name Ian Fleming was considering for his home in Jamaica that ultimately turned out to be GoldenEye. I think he picked the better name.

Here’s some titles I have thought of:

Some decent ones there

The ShameLady story sounds familiar now you said it.

FWIW, I have fan fiction ideas for The Property of a Lady and Shatterhand. Maybe I should finally try my hand at it.

I’d argue that Skyfall sounds very Fleming-esque. I agree that Fleming had a very unique way of words. His twists on idioms created some of the most iconic names and titles I’ve ever seen, You Only Live Twice being the greatest, IMO.

Others have tried to emulate him and nearly succeeded: Win, Lose, Or Die is probably Gardner’s best. But let’s not forget he also gave us Brokenclaw, SeaFire, and Cold. Benson had a few good ones: High Time To Kill and Never Dream of Dying are both good. I really like Trigger Mortis. Forever and a Day is a great title, but it isn’t exactly original.

I’d had to give it some thought to come up with my own ideas and 2 in the morning is not the time my brain is at it’s sharpest.

When it is not 2am have a think…

Go for it.
Sure it will be fine

I was watching the Inside Doctor No Feature and Monty Norman was talking about how he came up with the Bond theme based on a song he wrote for another play and the song was called Born Under a Bad Sign.
I think that would actually be a great title for a Bond film.
(Especially if Tom Ellis (LUCIFER) gets the Nod to play Bond next.)
(Also, food for thought…Tom has an excellent singing voice, It might be cool to have Bond actually sing his own Title track~)

What about a play on your name (not using Gold lol)

Yeah there are enough Gold Titles in the Bond universe already…