The World, it is said, is not enough and, bored by lockdown, it appears that villainous in-fighting has broken out to such an extent that things have to be settled between the Bond villains.

Accordingly, fate brings forth a series of 12 deathmatches, villain v villain – and you determine who wins, simply by voting for your favourite.

Winner goes through to the next round, loser receives a small funeral service with only pirhanas and a few tearful jumpsuited goons in attendance.

Picking the first round of matches at random from names drawn from the Covid-19 face-covering Mrs Jim has ordered for me (a bucket), there are some interesting encounters and some potential first round giantkillings and clashes of titans (and Titans! Will! Clash!, apparently).

Yes, I know some are tag-teams (eg Whitaker & Koskov) but this is only for giggles, they are fictional and – ultimately – are two heads better than one?

Will cast my eye over the bloodstrewn battlefields in a week from now. Any ties will be administered a coup-de-grace, also known as a flip of a coin. I know that’s unfair but consider who we’re dealing with here, and cope.

This one is easy: Kananga chokes on a cucumber sandwich…

Kananga has charisma and vanity. Drax was the place-holder with the flashing neon ‘Villain’ sign around his neck - inherited from Stromberg - in a role intended for the likes of Oliver Reed.

Kananga is underrated, I feel, and shouldn’t be judged by his often mocked demise. He has a beautiful balance of charm and a jealous rage always seemingly bubbling under the surface. That said, my vote goes to Drax, who gets some of the best villain dialogue you’ll ever hear.

That was a toughy!
‘Names is for tombstones, baby.’ narrowly pipped ‘See that some harm comes to him’ .

I feel that all the villains in LIVE AND LET DIE are extremely memorable to me, from the taxi driver to Whisper, Tee Hee, Samedi - and the boss himself with his alter-ego Mr Big. To me they go beyond cardboard thugs and caricatures since they display for the most part an entertaining individuality.

Lonsdale’s Drax on the other hand is an extremely well played archetype, larger than life and certainly more blasé about his tastes. Intriguing thought having Oliver Reed in the part. Maybe that Drax would have been more in line with the book’s version.

Maybe that Drax would have been more in line with the book’s version.

Definitely! The carnivorous Werewolf commando version! Reed would’ve been among the best villains in that role.

I’d love to see Eon one day do a slightly more boiled down Bond movie using this great novel, from which the existing movie only pilfered the names.

Just to clarify, are we looking for the “better” villain, or the one who would emerge alive if the two were put in a locked room together? Because my answers for those questions are totally different, in this round and many others?

Pure preference based on what you enjoy. If you want to imagine them slugging it out, by all means do, but it’s basically a popularity - notoriety? - contest.

I’d love to see Eon one day do a slightly more boiled down Bond movie using this great novel, from which the existing movie only pilfered the names.

And the fact that Drax plays bridge.

Kananga slips into minstrelry for me. I understand the idea behind the film, but Mankiewicz and a British crew just could not bring it off. Yaphet Kotto (who had been in Blaxploitation films and knew the terrain) complained about the dialogue he was given to speak–it was as if the film ingested half of the tropes of the Blaxploitation genre, and then tried to mix them with customary Bondian elements. No amount of shaking could make it a palatable cocktail.

I would go further and say Lonsdale’s Drax is the archetype brought to cinematic life. I can imagine him testifying before Congress or appearing on an MSNBC business program with the same sangfroid and certainty, and being hailed as a visionary.

I can imagine him testifying before Congress or appearing on an MSNBC business program with the same sangfroid and certainty, and being hailed as a visionary.

Absolutely. Drax could build his entire Moonraker program - shuttles, bases, space station - today with taxpayers money and make a fortune with shares options on the side. He could even save himself the radar cloaking - everybody knows about the Moonraker program - and the nerve gas. All he needs to do is taking his people up and wait for it…

Drax could build his entire Moonraker program - shuttles, bases, space station - today with taxpayers money and make a fortune with shares options on the side.

Exactly. I love a villain played as a respectable businessman. The unhinged psychopath does not work for me as well, since I will probably/hopefully not meet one during my lifetime. I am more likely to encounter the villain as brutal thug–gangsters exist–but they often hide behind the facade of the innocuous businessman. THE GODFATHER films are all about how a respectable business front hides the actual violence of the business

But the best for me is the megalomaniac businessman who keeps expanding and expanding his reach into people’s lives–he is someone I think we all encounter–either directly or indirectly–in our lives. Blofeld next appearing as the head of a social media company or other digital behemoth is believable, with the scary part being how willingly people have turned over to him the surveillance of their lives.

The unhinged psychopath does not work for me as well, since I will probably/hopefully not meet one during my lifetime

There is an element of paranoia in Fleming’s Drax. A billionaire philanthropist makes a victorious but after the fight ailing and scarred Britain a multimillion gift of the weapon to end all weapons (at the time), is praised by the establishment and the masses, knighted by the Queen and the tabloids, a true hero scarred like his home and a character even Bond can’t help admiring.

He’s absorbed into society with all his quirks and bluff manners, a working class hero the man from the street hails (fnar - and Bond is even surprised they don’t make him PM) while the upper crust is delighted at the chance to play cards with this ‘Lonsdale figure’. And all the while this champion of the masses, who’s out to make his country safe from war for years, is a certified card carrying Nazi blowing holes into the Cliffs of Dover.

If Fleming hadn’t written it in 1954 somebody could do so today and likely get a Booker nomination just on the topicality of the theme and the display of the British psyche. The Guardian would love it!

I’ve always thought that James Mason would have been a good choice for Hugo Drax.

Anyway, while Drax has the better one-liners, in a fight, I’d have to go with Mr. Big himself, Ross Kananga.

Jeremy Kemp was the perfect image of Drax for me… 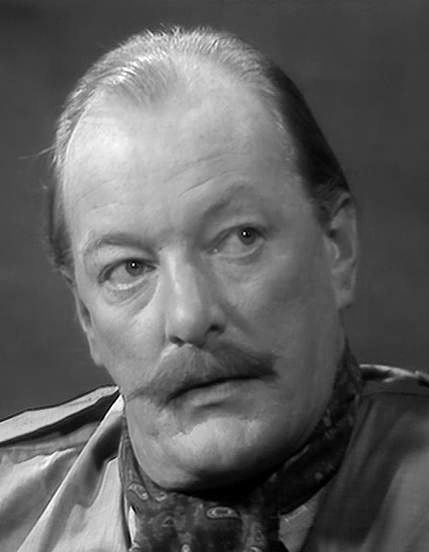 I even think I remember him in a role wearing a smoking jacket and whenever I read Moonraker I saw his features.

That is a good look alike for good ol’ Hugger Drax.

Son of a Soviet sleeper family, Boris Drax is the villain of Bond 26…

I didn’t necessarily mean in such an obvious manner. Moonraker of 1955 feels a bit like an echo of the communist scare the US went through at the time, only at once less paranoid and more fantastic.

Today the book would no doubt be seen as an allegory, a social satire that hits the sweet spot of a nation going through bizarre and surreal times. With crowds of Drax figures peopling the media and offices while the atmosphere actually feels very much like a rocket countdown - only that it’s ten seconds to ignition for roughly four years now and nobody can say what actually will ignite when we reach zero…