What are you reading?

I never understood the whole Sebastian Faulks writing as Ian Fleming schtick as the book never felt like Fleming. Like you said, there is good stuff in there and it has great potential. But it wastes it on an undercooked villain, a Darko Kerim stand in, and the most ridiculous twist this side of Rey being a Palpatine. I just don’t get how Bond doesn’t figure out that Poppy and Scarlett are one and the same. Scarlett tells him, her sister, who is addicted to heroin, is named Poppy. I mean it’s so painfully telegraphed and Bond comes off as the biggest dolt as a result.

I also agree that Faulks seemed to be only collecting a pay check. I think the reasons Amis and Horowitz were so successful in their efforts, was that they were fans and actually cared. It showed in their works.

Leave the Gun Take the Cannoli The Epic Story of the Making of The Godfather by Mark Seal.

I just recently read that one myself after watching “The Offer.” Great detailed account of the behind-the-scenes of the making of “The Godfather.”

I just finished it and I greatly enjoyed it. I’m hoping they do something like this again for The Godfather Part 2’s 50th anniversary in 2 years.

Batman The Adventures Continue: Season Two. In light of Batgirl being canceled, I know that a lot of people wish that the DCAU staff was involved with the live action DC movies.

Superman 78. The real Superman 3. Looking forward to the planned sequel.

Dead Wake: The Last Crossing of the Lusitania by one of my favorite authors: Erik Larson.

Happy National Read a Book Day everyone! I finished The James Bond Daily Express Omnibus Volume 4. A lot of underrated stories in there, and I recommend it. Now I’m onto The Silence of the Lambs (1988) by Thomas Harris.

Just finished Silence of the Lambs. I couldn’t put this book down, it was amazing all around. This goes more into character detail, as most novels do. Highly recommended for anyone! Next up, I’ll be reading the graphic novel Batman 89.

Earlier last month I finished Batman 89 the continuation graphic novel. It was just ok. It was just Tim Burton’s Batman 3. It wasn’t as good as Superman 78, which had some great twists and turns. I’m looking forward to that sequel. I truly recommend Superman 78.

I finished Raising an Eyebrow: My Life with Sir Roger Moore by Gareth Owen, last month. A lovely tribute to Roger and a interesting viewpoint on someone’s life to get into the entertainment industry. Recently, I finished Star Wars Heir to the Empire by Timothy Zahn. Why didn’t George Lucas make this into a movie back in the 90s? Just another questionable decision by him. Recently finished reading Tough Sh*t by Kevin Smith. It was surprisingly thought provoking and comedic. Currently reading Dracula by Bram Stoker.

I’ve also started planning my reading books for the next year, until December 2023. I would like to finish Ian Fleming’s Bond books, OHMSS, YOLT and TMWTGG. I hope to finish The Daily Express Comics as I have two more Omnibus Volumes (5 & 6) to read. I would also like to read Colonel Sun and Devil May Care for Bond within the next year, too finish off the one-off Bond authors.

Other books that I would like to read are the Hannibal Lecter books. I finished Silence of the Lambs recently and want to finish the other 3 books. There are also some book series I would like to start. The main 4 are Hercule Poirot, Miss Jane Marple, Jack Ryan and Jack Reacher. In between these books I would like keep up with Sherlock Holmes, Batman, Superman, Star Wars, Harley Quinn and any type of history (particularly in entertainment) books. Forgive my rant, I just want to plan ahead. Fun fact about me: I don’t read books in the same series back to back. It can save me from bias overexposure.

While enjoying (so far, I’m at the half point of it) Stephen King´s recent “FAIRY TALE” I am also looking forward to his next novel, to be released in September: 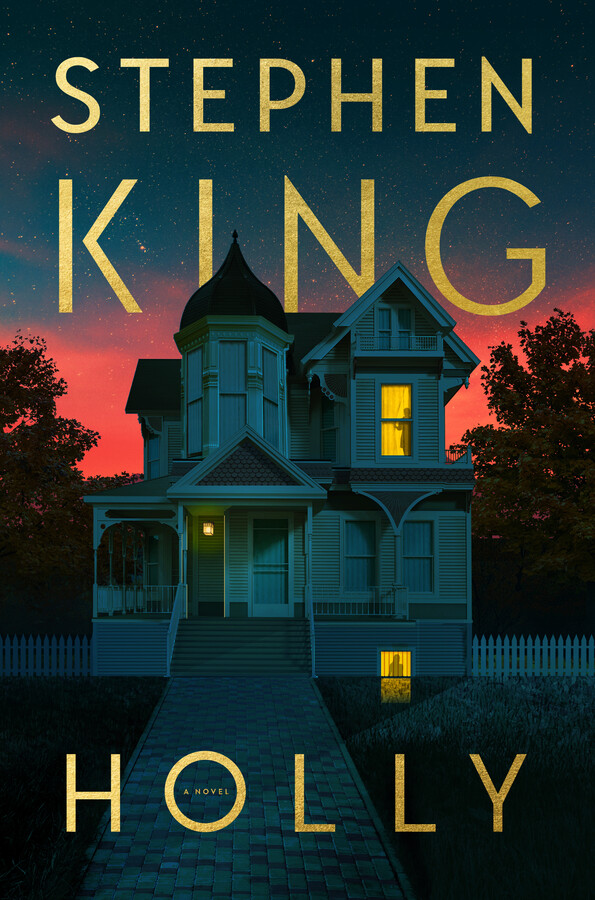 Check out the deal on Holly: A New Novel by Stephen King! at Cemetery Dance Publications

Just finished YOLT. I enjoyed it. I’m happy with the film adaptation we got, though. There’s still some decent stuff for the movies to use for sure. Tiger Tanaka is a great ally that I would approve coming back in the movies. He’s one of my favorite IF allies, I’m glad other authors brought him back. As for the story itself, it was truly unique, in a good way. I will start TMWTGG tonight or tomorrow. Then I’ll probably take a break from Bond novels. I’ll let you know what I think! I still think IFP should give Blofeld a chance to headline his own novel. At least once. With Irma Bunt at his side.

Just finished YOLT. I enjoyed it. I’m happy with the film adaptation we got, though. There’s still some decent stuff for the movies to use for sure. Tiger Tanaka is a great ally that I would approve coming back in the movies. He’s one of my favorite IF allies, I’m glad other authors brought him back. As for the story itself, it was truly unique, in a good way.

Considering OHMSS had yet to be made, the movie adaption had no choice but to go a different route. I also like what they did, laying the groundwork for the big extravaganzas that would come later with Roger Moore, namely The Spy Who Loved Me and Moonraker.

The main event of the book is the confrontation with Blofeld and Bunt, and because of that the majority of the content can be labelled boring. But I love the journey in getting there just as much. The friendships feel genuine - Tanaka, Dikko and Kissy care for Bond and I enjoy their dynamics. Death is also ever present (the suicides in the garden, the death during training, etc) which for a depressed man is either a temptation or catalyst to once again embrace life.

Fleming was unwell during the writing of YOLT and TMWTGG, and considering his heavy lifestyle it’s a miracle he lived long enough to write what he did. His idea of living more healthily was cutting back to 50 cigarettes a day and switching to bourbon. There’s no doubt in my mind if Bond was a real person, and didn’t die on the battlefield, he’d go the same way as his creator.

Read through the 2 most recent Harry Bosch/Renee Ballard novels from Michael Connelly. They were both enjoyable as the Bosch novels usually are. Though, it seems our time with Bosch may be coming to an end. I’m now reading Star Wars: Thrawn. I’m interested to see how it holds up to Heir to the Empire, which a lot of fans consider the original stand in for Episodes VII, VIII, and IX.

I finished TMWTGG. A quick easy read. That doesn’t happen much in Bond. I enjoyed it, but you could tell it was a bit unfinished. Still, I’m happy with the final book. All of Ian Fleming’s books are done by me! I could see Tom Mankiewicz’s idea of Jack Palance playing Scaramanga. I heard Palance’s voice along with Sir Christopher Lee’s at various points. I’m going to take a break from reading Bond for awhile now. Next Bond book will either be Devil May Care or With A Mind To Kill.

I enjoyed TMWTGG a lot more than I was expecting I would based on it’s “unfinished” reputation. I’d recommend getting into WAMTK next, it expands on and follows TMWTGG very nicely.