Who is Your Favourite James Bond?

Who is Your Favorite James Bond?

Figured we should bring this one over from the old site as well. Will be good to get a fresh look at where the community stands as well. Simply vote in the poll and then give a brief reasoning as to why (optional, of course), and a ranking of the actors if you so choose, just like in the old topic.

It was almost a tie for me - but for the last couple of months, whenever I thought about which Bond made the most lasting impression on me, it was Sir Roger.

I was surprised to find that currently I’m a Dalton man. This is somewhat peculiar since I wouldn’t necessarily see either of his films as my favourite. But to me Dalton represents a potential for more than we’ve seen and a certain farewell note to the ‘classic’ phase of the series. This is no doubt more due to nostalgia than to any actual qualities of his films. Younger fans will perhaps feel a similar attraction to Brosnan’s depiction.

It’s quite obviously Dalton for me. His two turns, alongside Connery’s first two, are probably the closest we’ll ever get to Fleming’s Bond appearing on screen. That, and both of his films have permanent residence in my top 5.

As for Roger Moore, I kind of view him separate from the rest of the pack. There are times that I’d be tempted to rate him #1, but his Bond was very much its own thing. He’s a bit like Tom Cruise for me, in that no matter how good or bad the surrounding film may be (and he was in his fair share of bad Bonds in addition to being in some of the franchise’s best), he was always immensely entertaining and the majority of his films have a rewatch factor that’s probably higher than most in the franchise. I guess he, Connery, and Craig are in a constant competition for that #2 spot behind Dalton.

If you’d asked “who’s best?” It might have been harder, but “favorite” is easily Sir Roger.

Close second is Connery, though for me he only really got interesting post-Bond. I’d rather watch him as Drivot, Malone, Ramius, Raisuli or Jones, Sr.

In a parallel universe where Bond films never happened Connery would have been THE perfect Flashman.

Sean Connery is still the top dog for me. After that it’s Roger Moore, Daniel Craig, Pierce Brosnan, Timothy Dalton and last but not least George Lazenby.

I love em all. But at the moment, DC is my best.

Roger coming in on top… perhaps not surprising, at the moment.

Roger coming in on top… perhaps not surprising, at the moment.

Not at all surprising, and he should be getting his due right now. Despite being much more inclined to enjoy the grittier, more realistic take on the character, I’ve always found that Roger always seemed to manage to stay even or even surpass at times his grittier counterparts, and take up residence just behind Dalton in my rankings. The rewatch factor on his films is, I would probably argue, higher than the rest, even if some of them don’t necessarily stack up in a completely objective discussion about their quality, if that makes any sense.

Indeed. I voted for Roger. When I look for a Bond film to relax with, I go for a Moore.

Connery is the best but Dalton is the most underrated so the Welsh Bond gets my favorite Bond actor vote.

Sean Connery. I am of a particular age where the original guy was in the driver seat for me. It’s true, you never forget your first (007).

It´s funny - Sir Roger was my first Bond and therefore will always remain my favourite, and back then, when I first watched Connery as Bond, I was reacting sort of disappointedly. This guy was so different from Sir Roger, tougher, less funny, even dangerous.

Thankfully, I warmed to Connery very soon, and now - hey, look at my avatar.

Agreed. The topic is akin to choosing a favorite child over the others. I’ve enjoyed all of them over the years. LALD was a breath of fresh air after the let-down that DAF was for me. I had the same feeling with CR after DAD.

Yeah, they’re all good in their own way. It’s incredible how they have nailed the casting of Bond every time. 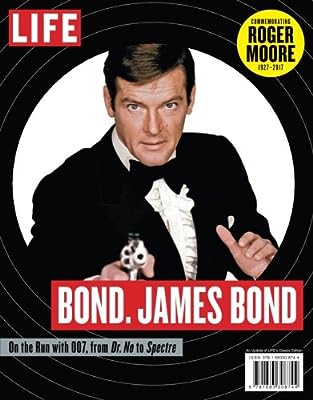 But it might be mainly excerpts from the Life book that was released 2012 celebrating the 50th anniversary.

Yes, seems likely. This one is just a lean 96 pages, dealing with all Bonds. Probably a Reader’s Digest version.