I actually received two this year!

A pair of 007 socks from my mum and a from Russia with love mug from Mrs, well Ms Silvertoe.

Did anyone else get any 007 pressies?

Snap!
Must be careful though, Monopoly has started many an argument at Christmas.

Got the “50 greatest Bond cars” book and also got the pirate classic “The Crimson Pirate” with Burt Lancaster on dvd and the Spaghetti western “Ford Yuma Gold” with Giuliano Gemma on dvd. I’m a very happy guy!

An all time favorite of mine, and it has lots of small Bond connections.

Ken Adam worked on it, not as main set designer, but he created some of the gadgets used in it (the flame-throwing tank, the hot air balloon, the submarine). There’s a great picture of him, Burt Lancaster and Nick Cravat when they the were shooting the scene with the fish barrel (have it in a book, but can’t find it online).

A young Christopher Lee has a small role in it.

The female lead, Eva Bartok, was married to Curd Jürgens (Karl Stromberg), but they divorced after little more than a year, after he found out that there were serious doubts about him being the father of their child. Rumor has it that the real father was Frank Sinatra.

Myself, I got a 1968 “James Bond Annual”, one of the Nic Raine / Prague Philharmonic CD Box Sets and a German Fan Club mug.

‘Only’ two books I gifted myself with: 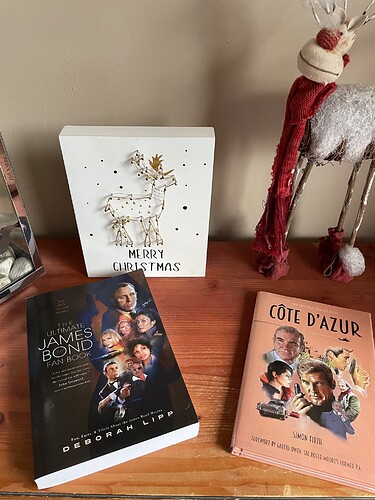 I already had a chance to browse through the latter; a great exploration of the various real life locations where 007 clashes with villains and henchmen in the lushness of Southern France. Splendidly illustrated with a wealth of photographs this tome really makes you want to pack the battered Rimowa or weekender and just dash there for a week or six. A nifty inspiration for future travels - once it’s reasonably safe to do so again.

The former is nearly 500 pages of educated reflections on Bond films ranging from the obvious (plot synopses and analysis for each film) to the obscure (which games are played, which hands in the respective games; which drinks are taken, which goofs are made). A fun book that will likely astound and surprise even veteran fans with its many facets.

I don’t actually have anyone to play it with. I’m thinking of keeping it mint.

I received the 25th anniversary Goldeneye coin from the Perth Mint.

Also finally received the Moonraker and San Monique t-shirts from the 007 Store in Large.

I was looking myself for a Moonraker T-shirt (the vintage poster one) on the 007 store site, but I couldn’t find out if it were men, or women shirts, which ofcourse have different sizes. Did you just buy your regular size?

Did you just buy your regular size?

Yes, and it fits fine.

A little late to this particular party, but I received a bottle of the later NTTD branded Bollinger, a TND Turnbull and Asser tie (which is stunning) and a pack of the new playing cards as advertised on 007.com.

Of the last, I always thought cards were cards were cards. These are really quite something to behold. They have a lovely weight to them, very fine, very sturdy and beautifully designed. Recommended.

Hope everyone had a good holiday period.