This week marks something special for me. I didn’t really think about it until recently when someone asked me how it all started. Thus…

Wouldn’t trade a moment of it.

It was sometime in early December after my 5th Birthday that it happened. The first and last time I asked the question “Who’s ‘James Bond’ ?”

My sitter was Mrs. Mills. A widowed, retired school teacher in her late 60’s whose daughter had been a babysitter to my brothers during her high school years.

Mrs. Mills was mostly deaf on her left, smoked Winston cigarettes and taught me how to work a Zippo lighter, always to look a lady in the eyes when lighting her cigarette and enjoyed a High Ball cocktail. The penultimate personality to watch over a five-year-old in the early 70’s.

My parents were out for the evening at either a football game or possibly the Seattle symphony. Bedtime along with a story came around that night and Mrs. Mills grabbed the book and read about five pages and that was the end. Too late to begin another from my stack, but I was still up as it usually took 10-20 pages to send me off. I had noticed her always reading a paperback so I asked her about it. I still remember the answer clearly:

“It’s a James Bond book.” Following my above question, she answered: “Well, he’s a character I like. He’s sort of a policeman but works for England and lives in London. There are bad guys doing bad things and he tries to stop them or at least what they’re trying to do. He travels all over the world and there are pretty girls and fancy cars. Sometimes he gets into fights and doesn’t always win but he never gives up and the bad guys get what they deserve.”

I liked police and detective shows and movies. This guy sounded pretty cool. The title of the book was ‘Live and Let Die’ and she was re-reading it. After a few more questions, she went back to chapter one and read the first sentence. Thirty minutes and two chapters later, the hook was in and I was still awake. I barely made it to the end of chapter three, but it was a start.

There were, of course, more books and Mrs. Mills passed them along to me and told me the order in which they took place. By the time we got through ‘Casino Royale’ I was caught up and my own reading and comprehension had started to grow. I began ‘Moonraker’ on my own with Mrs. Mills’ help and the bits of clarification when I had questions. It’s why I learned to play Bridge and still my favorite Fleming novel.

It was just after my seventh Birthday that I was made aware of something I had somehow missed.

In common colloquial parlance, this is what is known as a “Game Changer.”

Upon this incredible revelation, I was then brought up to speed by my parents and Mrs. Mills and my older brothers. Just after school started (2nd Grade) in September of ’75, I settled in and watched the network television premiere of “Diamonds Are Forever”. My first introduction with the classic and now iconic image of the gunbarrel iris opening up and the music firmly cemented in my brain that this was something both special and amazing. Certainly there were differences from the book I had read, but it was still cool.

On it went and all that went with it. Following the films, re-reading the novels and embracing the legacy of the continuation authors, collecting the soundtracks, the first of the Bond Bibles on the films and novels, posters, lobby cards, corgi cars, t-shirts and proudly joining the US fan club. My first trip to Britain was in June of 1979 which (thanks to my parents) included the premiere of “Moonraker” and a visit to Pinewood Studios. June of 2019 I was back in London for my “40th Anniversary” limited tour while “No Time To Die” was filming. After numerous release delays due to a pandemic worthy of a Bond villain’s creation, I attended the premiere in London in 2021.

I’ve proudly served for 20 years as a member of Commanderbond.net and the last 19 of those as a Moderator making sure everyone plays nice, contributing articles and generally discussing all things Bond and also enjoyed the company of many members of the Ian Fleming Foundation.

My travels have taken me to various locations of both the novels and films as I’ve attended many Cons, Bond events, premiers, screenings and gatherings meeting some amazing fellow fans who have become friends along with hosting three Bond events and four premiere parties of my own with more to come. I continue to write my own fan-fiction based on an old RPG character of my own creation and even took a shot at the role with a student Bond film. Meeting many of the actors, actresses, producers, directors, authors, writers, stunt people and collectors that are a part of 007 have been some of the most epic moments for me over the years. I’ve also had the good fortune to be kindly included in the acknowledgements of several books on Bond and been interviewed for articles relating to food, vehicles, gadgets, drink, attire, weapons, gambling and travel both online and in print.

Bond has always been my security blanket. Something I can always enjoy whenever I’m living or emulating it during my peaks and also giving me comfort during the valleys and some rough times. It’s shaped who I am and the better far outweighs the worse and my fandom has gotten me through some tough scrapes more than it’s gotten me into them. My Mom and Dad appreciated it all as well and always looked forward to each new novel and film.

I know I’ve never saved the world, but a few times here and there, I’ve saved somebody’s world or their definition of it when they needed me. Sometimes in a tuxedo (I have five) and sometimes in jeans and a Bond T-shirt. Good enough.

My own dossier on CBn (CommanderBond.net) reads: “Charlie Axworthy – Bryce-003 – Living Bond so you don’t have to & the Blunt Instrument of CBn” and I still get the occasional “life line” call or text at all hours and from all over the world to settle a debate or answer some obscure bit of trivia.

April of 2023 will mark 70 years since the publication of ‘Casino Royale’ and October celebrated 60 years since ‘Doctor No’ hit the cinemas.

007 looks to be sticking around for some time to come.

Truth IS stranger than fiction….and also a Damn side more entertaining.

Birthdays are always Birthdays, but Anniversaries are milestones.

Here’s to another 50 for me and more for Commander Ian Fleming’s creation.

You already were a legend when I joined here, and you continue to be.

Thank you, Sir, for all your contributions.

I think almost joining a Dare to be Bond event back in the day and enjoying all the updates from Casa Bryce is what led me to join CBn in the first place.

And here I still am… what… 15 years later? Never thought I’d outlast Qwerty

Why do I bring that up? It shows that Charlie has never been just a Bond fan. He is a member of a community, that he helped create, that has brought great joy to people he’s never met.

Happy Anniversary Bryce_003! Great hearing your introduction to James Bond 007 and the ensuing years thereafter. Like those above, I’ve enjoyed reading your inputs on this and the commanderbond.net website as well as your The Making Of On Her Majesty’s Secret Service and The Making Of The Living Daylights books. Thank you for those great and solid efforts and here’s to your next 50 years of Bond fandom.

Thank you, but you’re confusing me with Charles Helfenstein on the books. Partially right though as I am in the acknowledgments.

But you are in the running for Bond No. 7, aren’t you? 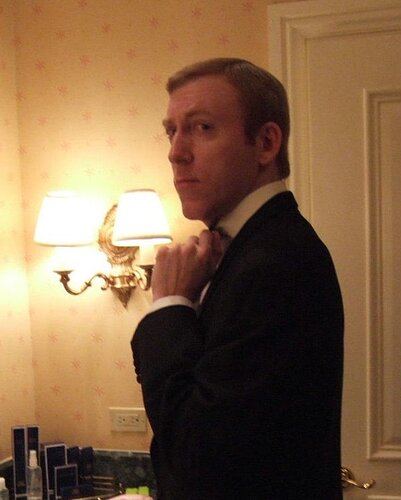 Oops! Sorry. And my apologies to Charles Helfenstein.

But my comments about your input on our Bond sites still stand.

Golden Scorpion in the post to you, my smashing lovely.

It’s not the holidays until I get the box of scorpions. I do always find good homes for them.

Gala and I are still trying to figure out whatever became of the malnourished leopard (Geoff) you susposedly had hidden in my suites mini-bar in Dubai. I’ve been back twice and the staff has never said anything, but leopards roaming about over there is apparently not an uncommon thing.

Happy 50th fandomversary!! My 23 years is in its infancy in comparison.

Always been a pleasure and an honour to work with you.
Been scrolling through some old material from our first London mission back in '04. 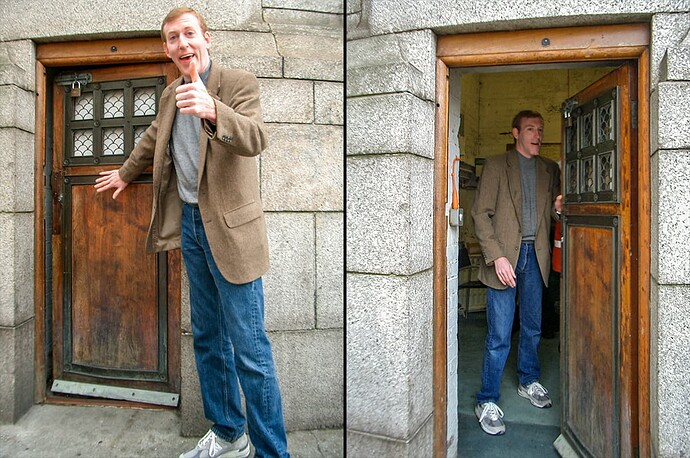 And on the other side of that bridge… 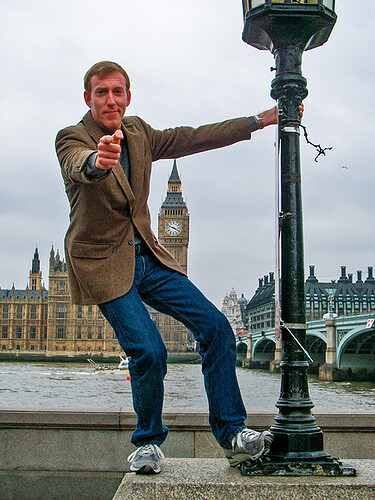 Congratulations, Charles!!! Unlike you, I can’t mark a specific point where I became a Bond fan. It was a gradual process starting with watching the films on the ABC Sunday night movies (with the awesome voice overs/intros by the legendary Ernie Anderson) and culminating with starting on the novels while in high school. Never looked back at that point. It’s been a blast, and I’ve met some great people along the way.

My dad tells me that he took me to a double feature of Thunderball and You only Live Twice when I was 4-years old. I have no cohesive memory of it other than the shark scene in TB and the volcano attack in YOLT. Two years later he took me to a double feature of Dr. No and From Russia with Love and Bond was forever seared into my consciousness. I remember everything about that cinema experience and my love of 007 was fully formed. So, I can say I’ve been a conscious Bond fan for 54 years but was introduced 56 years ago. It’s nice to know there are others out there with similar decades of allegiance.

That is how I started as well, and, DAF may well be the first one I ever saw (I have a cool still of an ABC ad for the showing).

First in-theater Bond was supposed to be LIVE AND LET DIE, but the theater owner cancelled the screening since there were not enough patrons. I had to go up the street and watch MARY POPPINS with my younger siblings (scarred me for life). I finally experienced Bond in-theater with my Dad–a double bill of TMWTGG and TSWLM. The following year I saw MR in the same theater with my whole family, and got a mini-poster that hung on the wall of my basement for years, along with ones for FEDORA; CITIZEN KANE: and 1900.

51 for me.
Went and saw the latest James Bond movie because a girl I liked liked Bond. I certainly got more from Tiffany Case and Plenty O’Toole than I ever got from her! (To be fair, I was only 12.)
As Diamonds Are Forever was my first exposure to 007, it became the one against which I rated all others. Odd yardstick, I agree, but it explains my liking for all Guy Hamilton;s entries. In fact, all my favorites ware released between 1965 - 1977.

Not at all. I think first exposures to a film series often set the template for future responses. DAF is also a film very much of its moment, and if you were shaped by the 1970s as I was, there is a recognition/familiarity that imparts a certain pleasure, which lies outside of aesthetic regard. The Bond films of the 1960s, no matter how good, are always artifacts of the 1960s for me, and my own less than full embrace of the period does affect my response to films made in that time period.

but it explains my liking for all Guy Hamilton’s entries.

He was he best of the bunch among the early directors. Not quite an auteur, but much above a metteur-en-scene.