Rumors are that the 007 films are finally hitting UHd Blu Ray disc in August or September. A set of the Daniel Craig Bond films was posted about today.

I’m hoping that the other films are also on the way.

I’m hoping to upgrade to UHd for the releases by January 2020.

Pity. Streaming services are killing physical data storage formats. Blu-ray is far less popular than DVDs once were. BD UHD even less.
In the meantime, I’m having a hard time completing my Blu-ray James Bond collection so I’m hoping for a re-release soon enough.

They’ve been on the iTunes Store in 4K for a couple of months now. They look incredible: though for some reason LALD & TMWTGG don’t seem as sharp as all the others. TB is a thing of beauty.

Oh… Great news for my collection

Although I have pared it down to the essentials (which are still a lot) and collector´s editions with new transfers and supplemental material, I handle it like my music: only the absolute must haves “stay physical”, all the others are digital.

But I really distrust streaming services since they decide what’s in their catalogue… and suddenly something is gone. And good luck finding those titles on CD or DVD then.

Sure, Bond films will probably be around for many more years on any streaming service or digital supplier. But other films or music…

Yeah - the push to digital is understandable but not really great for owning a copy that can’t be taken away (ie: streaming service loses rights to the film, or its an older or more obscure film not deemed of value for a service and so lost to history), nor is it good for having your favourite films in a way that you want them - I have shelves at home of my favourite books, films, records and video games so any fully streamed future is not particularly of interest to me right now

Meh, this doesn’t really do anything for me. I already have the Bond 50 box set + Skyfall/Spectre on Blu-Ray. I’ll pick up the Bond 25 blu-ray too, but otherwise I don’t really buy physical media anymore. For me, streaming is actually more convenient.

Unless the internet connection is done.

Fair assessment. Though I usually download whatever I buy digitally.

Unless the internet connection is done.

Don’t be silly, the internet’s always been there…hasn’t it?

And it always w

I have the tv/film I love on Blu Ray so I’m not at the mercy of who paid the most for “exclusive rights” on streaming or traditional TV airing (which is surely the biggest cause of piracy) and the inevitable moment your hub goes down halfway through a film. 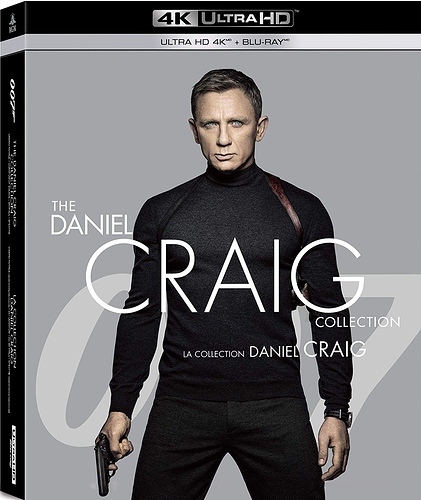 But I really distrust streaming services since they decide what’s in their catalogue… and suddenly something is gone. And good luck finding those titles on CD or DVD then.

A new set of gatekeepers to be wary of.

Also, I am from a generation that collected–my father collected stamps and coins, and for me it became books (couple of thousand–I cannot read anything serious on a kindle–I need the tactile sensation of the book in my hands) and dvds and blurays (400-500). My husband who is younger is just the opposite–he does not even want his favorites on disc. He is a Millennial, so we always joke that collecting is another thing Millennials are killing.

I´m trying for a mix: keep those which I really, really love and will want to see/hear again or form part of an essential collection, relegate the rest to the digital area.

As for reading - since I bought a kindle I have never looked back again. On my shelves are some collectors´ editions of books which are important for me and several photo books (including many Bond archival stuff, of course) - but I only read on a kindle for years. It really clears up space in our apartment AND it enables us to read even more since no storage space becomes cluttered.

Also, unable to read without glasses anymore, I love the possibility of enlarging the font on kindle…

Also, unable to read without glasses anymore, I love the possibility of enlarging the font on kindle…

The four Craig films will be released in 4K on October 22nd.