In a discussion with a non-fanatic years ago, I couldn’t convince her that David Niven did not play Bond before Sean Connery. She wasn’r confusing Niven with Barry Nelson - she was convinced that Casino Royale (the spoof of the series) predated Dr. No. (Give up in disgust and frustration time.)
Others I’ve met are convinced that OHMSS came first, or that it came after DAF. Oh, and it starred some berk named George Lazenberry.
In 1983 I overheard someone on the bus telling his friend about that cool scene in NSNA:
“So the villian says ‘I guess I owe you a million dollars’, hehehe, and Bond says ‘I’ll trade it all for a dance with your girlfriend’ hehehe.” (Grind teeth and keep out of it time.)

What are some of the strangest, unshakeable misapprehensions you’ve heard from non-fanatics regarding our beloved series ?

Really had to dig deep in my archives and only found this small version of something I made almost 15 years ago. Made it for a similar thread at the old forums, so I’d say it’s appropriate to re-post it here: 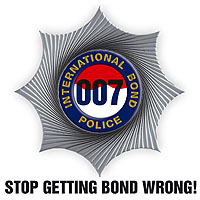 Someone somewhere was complaining about how dreadful that guy with the Crocodile Dundee accent was, especially when “he looks into the camera, grins, says ‘this never happened to the other fellow’; laughs and turns away.”

There’s no way to convince people like that of the inaccuracy of their memories, because they’re never going to watch the movie again and run the risk of being proven wrong. The people behind explaining the Mandela Effect have probably had plenty of experience with this.

As I said, it’s the only version I could find in my archives, and it’s really small and low-res. The work files for it could be on one of about 150 old CDs, or on my old G4 Cube which won’t start any more, or heaven knows. Heck, this thing is so old that it’s possible that I did it in CorelDraw (and looking at it again now, I’d say so), so I wouldn’t even be able to open them.

That said (and back on topic), one of my main pet peeves is when people insist that Roger Moore drove a DB5 as Bond. Thank you for Cannonball Run, Mr Goldfarb

No internet access to immediately prove those guys wrong?

one of my main pet peeves is when people insist that Roger Moore drove a DB5 as Bond. Thank you for Cannonball Run, Mr Goldfarb

It’s kinda weird to think that, thanks to two pastiches, Timothy Dalton is the official Bond not to have driven the DB5 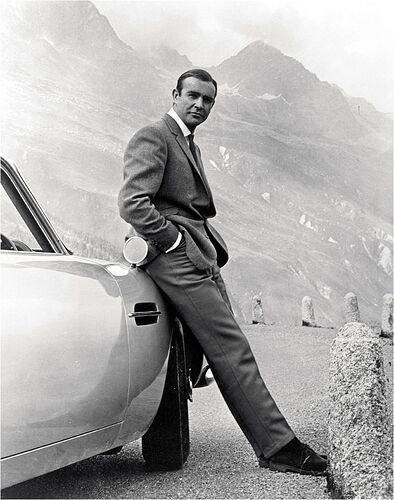 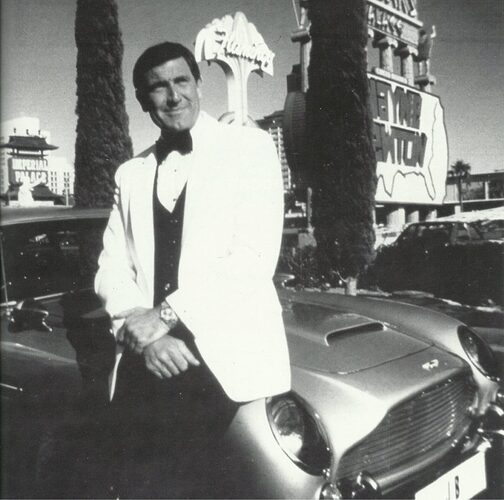 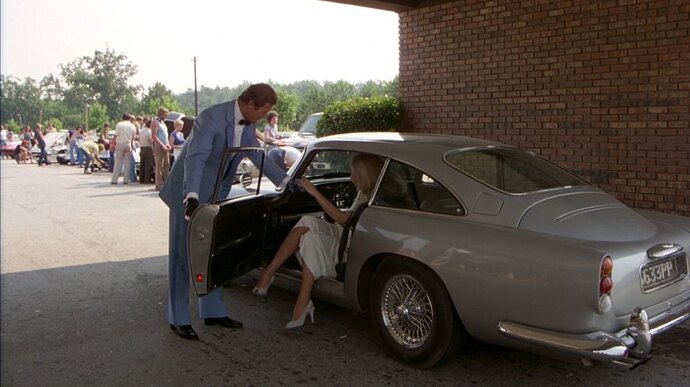 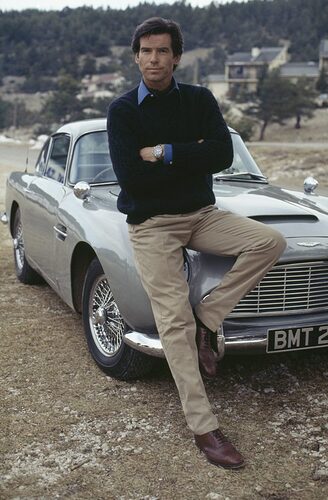 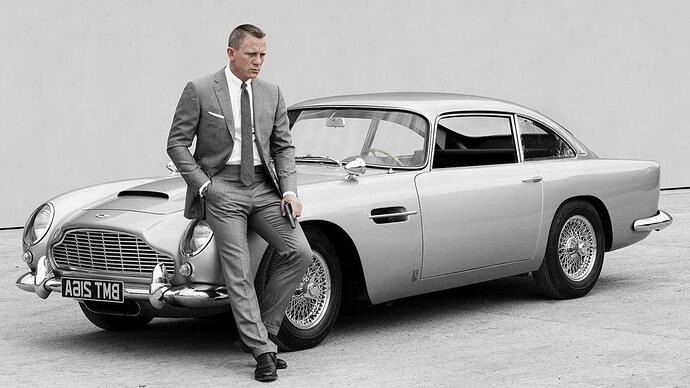 Sorry for the flipped Craig one. Was the smallest sized one I could find

Perhaps not exactly dealing with non-fanatics but hugely time-consuming nonetheless:

Wikipedia’s entry for You Only Live Twice cited for years a scholar claiming it was the first time Fleming acknowledged the defection of Burgess and Maclean. I edited this repeatedly but the version was always restored since it had the benefit of a reference link.

Someone once tried to explain how a stunt a Bond film was done. Said stunt involved parachuting into a moving car and was achieved by disguising a stunt driver as a seat. I had to explain that this was Austin Powers and not Bond.

I once had a roommate insist that the spiral car jump was in LALD. I was like, dude, you’re confusing it because the same sheriff is in both. Nope, he insisted. I pointed out all the posters in my room, Bond books, movies on DVD and VHS (this was the 90s), and that I clearly knew my Bond.

Golden Rule when you’re on a mission to stop people getting Bond wrong:
Always try to get (at least) a beer out of it.

When I was a kid, I got Bond wrong in a really weird way: I had seen “Warlock” before, in which Henry Fonda plays a gunslinger who’s got a pair of gold plated colts. In Germany, the movie was subsequently named “The Man with the Golden Colts”. Unfortunately, the german title of TMWTGG translates to “The Man with the Golden Colt”.
So, when I first read about a Bond movie of that name, I thought “They’re writing rubbish there, I know for a fact that this is a western, not a Bond movie.”
And I was certain about that, until I saw my first TMWTGG poster.

Talking about getting Bond wrong as kid:

The most treasured items you could bring to the playground - or have in your toy box at home - used to be the trick models to the various series of that time, U.F.O., Thunderbirds, Captain Scarlet and so on. But while the British shows either didn’t get reruns or weren’t very successful in Germany the greatest treasures used to be the old Batmobile and the DB5 from Corgi. Also, they used to be roughly the same scale with their little figurines inside.

I had both of them I think about two years before I saw my first Bond film. But since they fit so well together my first impression of Bond was as being part of Batman’s world. I wasn’t even sure whether this Bond guy wasn’t a baddie; the comics didn’t mention him.

Oh yes. For me, it was kids who had the flying Citroen DS from Fantomas who claimed it was a Bond car…

In University - no less - a fellow Drama student claimed that all Bond villains have deformities. “Goldfinger, for instance.”
“What was his deformity?” I asked.
“Well, he had a gold finger.”
I figured she remembered that on Get Smart, Bronzefinger had a bronze thumb, ergo logic dictates.
(Sonny Bono: “Why do they call you Leadfinger?” Truman Capote smashes balsa wood table.)
I guess that’s how all the great Bond villains got their names, right? Like Metalhands, Eyepatch, Duellingscar…

In 1974, my fellow 9-year-old classmates and I were excitedly discussing the plot of Goldfinger after it aired on network TV, and one kid said it was awesome how, when the crushed-to-a-cube car was lowered into the bed of Oddjob’s pickup truck, you could see a stream of blood oozing from it (courtesy of “the late Mr Solo”). I couldn’t believe I missed that, and blamed my black and white TV.

in Germany the greatest treasures used to be the old Batmobile and the DB5 from Corgi. Also, they used to be roughly the same scale with their little figurines inside.

Oh, yes - same here. Together with a metal Enterprise which could shoot “photon torpedoes” which resembled breath mints.

Those metal space vehicles were “Dinky” toys. I remember being amazed at that brand name, as in the States, “dinky” meant “puny” or “flimsy.”

The UFO Interceptor was my favorite even though they painted it green (Stop Getting Anderson Wrong!). Despite being a rabid Trekkie, I could never warm to the Enterprise. The disc-firing mechanism ruined the look of the saucer section, and the shuttlecraft bay doors were on the bottom of the secondary hull! Plus the shuttle was so large there couldn’t have been much room for anything else in there, and the Enterprise itself could only have held about 50 crew members. But at least the doors made it easy to stand the ship on a shelf, which you can’t say about any other Enterprise model, ever.

My thoughts to a t…

(Stop getting Anderson wrong: the eagles from Space 1999 were metallic blue and green…)

I would have to go with all of those James Bond marathons that used to be on TBS or some such channel that would play Never Say Never Again twice as much as my other film and would never air any of the Brosnans (this was like 2001).

The insistence that Jaws became a goody when he met the girl with braces.

Amazing how many insist that, I gather there’s actually studies on it!

Moore being just a joker, Dalton having no humour.