Exciting news… I’m heading back to London this coming March from the 15th -29th as a 40th birthday celebration and am planning on hitting up several Bond related locales. For those of you who don’t know, I actually lived in the UK (from 1988-1998) and went to school in London which is really where the whole of my Bond fanaticism originated with going to a special preview screening of Goldeneye, two weeks before it was officially released in 1995, although I had been introduced to Bond several years before.

I’m already planning on going to the Bond In Motion exhibit at the London Film Museum, partake in a martini or two at the Dukes Bar in Mayfair (which apparently is where Fleming got his inspiration for the famous Vesper), might pop over to Buckingham Palace to see if Gustav Graves is parachuting in, check in on the MI6 building to make sure that Silva hasn’t blown it up again, and a few other surprises. Oh and if any fellow CBNers might be around in London at the same time, I would certainly be up for a meetup! I look forward to taking lots of photos and sharing them here!

As Barbara Broccoli would say, “Watch this space!”…LOL Cheers!

Enjoy your trip Dove. This sounds awesome. Send pics and other intel when able. I visited a couple of GoldenEye locations last time I was there…

Was in London on Friday, but the only Bond thing I did was looking at the “Fighting Temeraire” at the National Gallery. On my way there, I did a double take when I spotted the “Duke of Wellington” from Dr No. They’re just a few steps apart

Two things you should definitely consider doing: one is the speedboat tour on the Thames (à la Craig). Don’t know which of them is the best/cheapest. We did that during the QoS premiere week with some of the CBn team, starting from the London Eye, great fun.

The other one is the Millenium Dome climb, which we did at the Skyfall premiere. One of the best Bond location visits I ever had.

Thanks for the suggestions Stromberg! I may not get around to doing anything as extravagant as the speed boat ride or climbing the Millennium Dome (this time, but we’ll see…) I had visiting the National Gallery on my list to see the painting from Skyfall but I had no idea the Goya Duke of Wellington was there too… I will be sure to look for it!

Just a few days to go before I head to London. Getting all my plans set. If I have time and when I have access to wireless, I’ll try and post pics when I have a moment. Otherwise I’ll do so when I return home. Cheers!

Have a great trip and a safe return.

Arbogast, yes, Duke’s is on the agenda…ahh I didn’t think about the coctail napkins but great idea!

Have a cocktail in Rules restaurant. This of SPECTRE fame. Maidens Lane in Covent Garden.

I had a Sazerac of LALD fame - Leiter encouraged Moore Bond to live it up in New Orleans with such.

If you’re so inclined, stop in at the Rivoli bar at the Ritz. Jacket and tie required, but my man Andreas makes a fine Vesper and, being the Ritz, they had a seasoned mixologist come in and recreate true Kina Lillet. Tell him I referred you. Here’s a pic of the chap to look for.

…The one on the left. 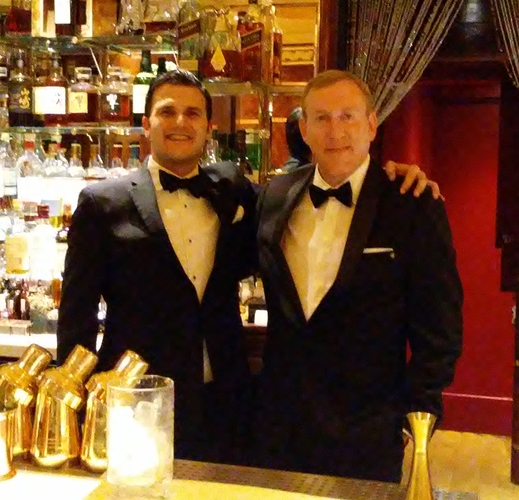 Whew! Hi all, I’m back! I had a FABULOUS time and saw and did a ton of fun things…many of them Bond related…lol! I got to quite a few of my intended locations, but not quite all…oh well, gotta save something for the next time, huh? Many thinks to all for your suggestions. I have pics that I’m organizing and will post in the next day or so. In addition to the various Bond related locales, I spent A LOT of time at the Bond in Motion exhibit in Covent Garden (which was terrific!) and took perhaps way more pics there than I should have…lol I will post a few pics of the exhibit here but most likely will put all on instagram or FLickr and will make a link to share.

Here’s a pic of the H.M.S. Belfast (where you might remember the press conference for Daniel Craig’s introduction as 007 was held in 2005) We were staying at a hotel right down the street from Tower Bridge and I spotted this as we taking a walk to stave off jet lag after arriving in London. 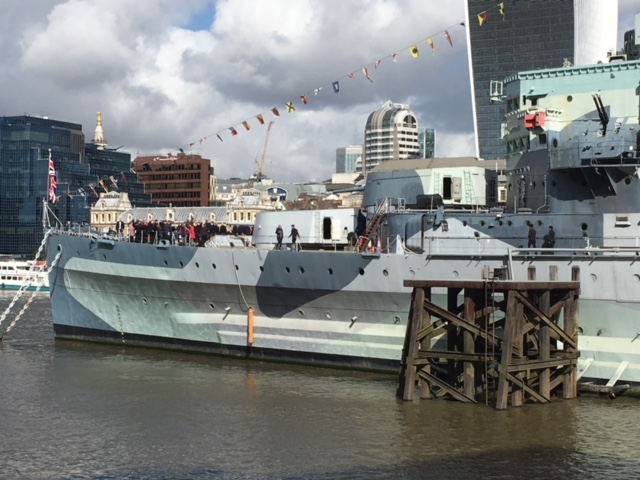 As we were walking past the H.M.S. Belfast, it appeared that there was some sort of ceremony going on aboard her, a la Goldeneye, although there were no TIGER helicopters to be found. 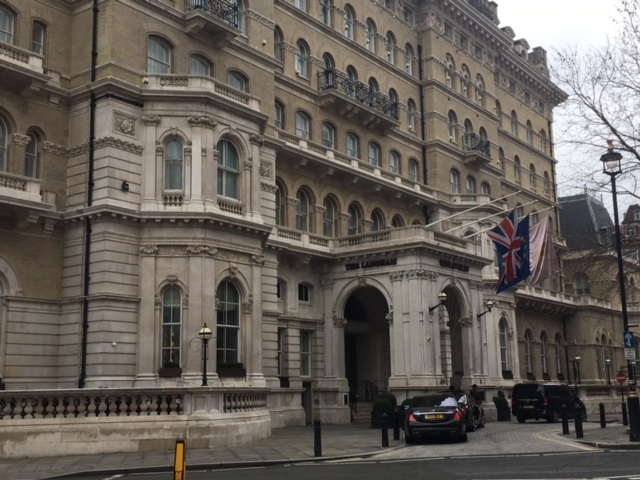 “I want you to set me up with Janus…tell him I’m asking about the chopper. You’re going to meet me tonight at the Grand Hotel Europe…” (in reality, The Langham Hotel on Regent Street) 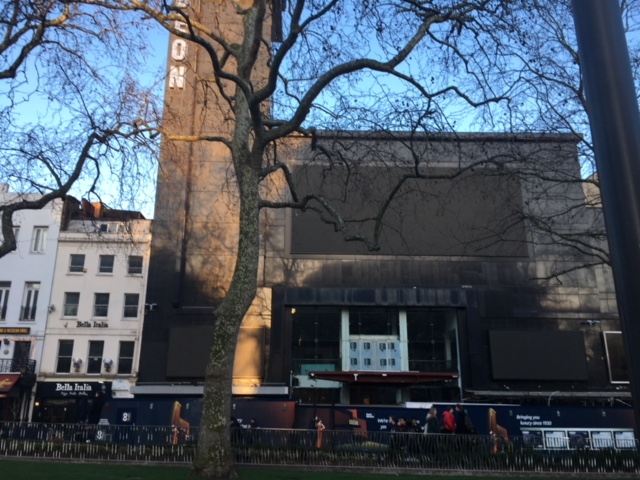 Funny enough, the day I was at Leicester Square, the European premiere of Ready, Player One was going on, across the square from the ODEON…lots of music, the red carpet with limos arriving, loud music and an annoying MC…lol 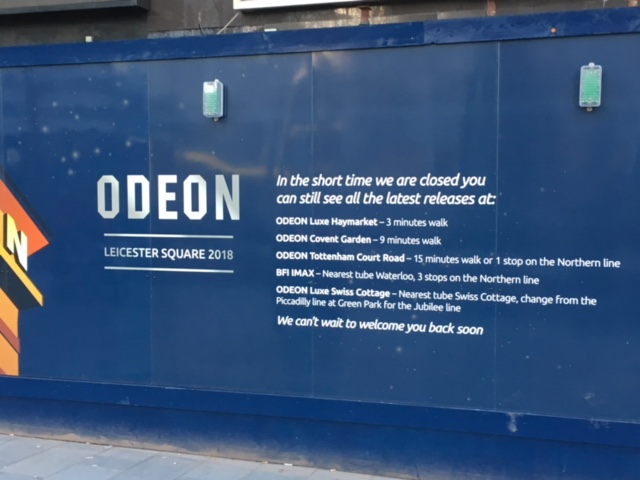 Let’s just hope that it will be fully operational by the time November, 2019 comes around… Mr. Bond is expecting you, ODEON!

Did you see the old Pavilion as well just round the corner towards Piccadilly Circus? the ‘original’ home of Bond…